With games going final just a few moments ago - though the outcome had long since been determined - the lights have gone out on Xavier's first season in the Big East. From here until the beginning of conference play next season, the rest of the Big East games will be contested in the tournament in Madison Square Garden. Here's how the standings shook out.

Now the bracket for the tournament is set. The first games will be played at 7pm and 9:30pm on Wednesday, with the top six teams in the league waiting in the next round, which will tip on Thursday. Xavier will play on Thursday at 9:30pm. If the Muskies win, they'll go on to play (presumably) Creighton at 9:30pm on Friday. Here's what the whole shootin' match looks like. 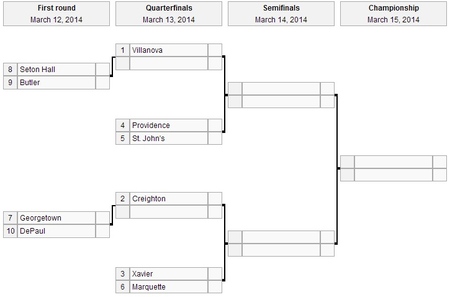 Thanks to Wikipedia and fair use laws for that bracket. I think this broke about as favorably as Xavier could have hoped for, but I'll be interested to hear your thoughts here and on Twitter.