The packline can work, but Xavier has to make adjustments to it. These three steps are the very first that must be taken.

Share All sharing options for: Fixing the Packline: Conclusions

There comes a point when someone is climbing a mountain that a decision must be made. Everything the climber has done to that point, all the success the methods have brought, comes down to the simple decision to just keep trying harder in the same way, or to switch something up. Both ideas are, 25,000 feet in the air, fraught with peril. Trying to improvise requires intelligence and the ability to think clearly. Just mulishly trying harder often simply wears down the vestiges of energy and leads to another tragedy on a far off precipice.

Xavier, without the same consequences, has reached the point in their season, perhaps in their evolution as a program, where that same decision needs to be made. The success that the packline defense has brought in recent years has taken Xavier tantalizingly close to the mountaintop, but it now seems destined to leave them eternally just short. A barrage of three pointers has buried Xavier's excellent interior defense under a deficit that is simply cannot recover from. Xavier's offense, 35th best in the nation, has not been able to score enough to make up fro the unholy point numbers opponents are putting up. How, then, can the packline be fixed?

#1. Extend the pack- The basic idea of the packline is that the team sits in a "pack" somewhere inside the three point arc. Xavier's pack has, historically, sat somewhere around two feet inside the line. In Big East play that has led to opponents getting 32.9% of their points from behind the arc and taking 35.7% of their shots from there. Both of those numbers are alarmingly high. Xavier's reluctance to even show a hand in passing lanes has led to them forcing turnovers on only 14.3% of opponent's possessions, worst in the Big East. It's worth noting that both Virginia and Arizona either run at three point shooters or set the pack higher in order to increase perimeter pressure.

The game against St. John's showed Xavier coming out at least a step farther than they usually do. While St. John's doesn't shoot much from deep to begin with, the Musketeers didn't give them much a chance to so on Tuesday. Getting out farther also led to an uptick in turnovers, with St. John's turning the ball over on 21.2% of their possessions. While the three point shooting is difficult to draw conclusions from, forcing a team as careful with the ball as the Red Storm to turn it over substantially more than they normally do is a clear step in the right direction.

#2. Don't hedge with Stainbrook- Both Virginia and Arizona interviews that we conducted made specific note that the big that hedges so far on ball screens is either remarkably athletic or remarkably adept at forcing the ballhandler out toward the half line and then recovering (Akil Mitchell for the Cavaliers, Aaron Gordon for the Wildcats). Matt Stainbrook, and this is not intended as a personal indictment of him, is simply not athletic enough to handle either of those tasks adroitly.

This raises a bit of a sticky issue for the Xavier coaching staff. Stainbrook cannot simply refuse to engage someone coming off a screen, or that man will constantly be rolling open for an uncontested three pointer. The best thing for Matt to do would seem to be the standard big man's approach to the high screen: show a hand's worth of help and wait for the guard to recover. There are few perfect solutions, though, for a well run high screen.

#3. Rotate correctly- Teams are killing Xavier from the corners of the court. The corner three is statistically the most likely to go in and opponents, especially Villanova, have slaughtered Xavier from down there. Part of the reason is the relative lack of footspeed of Isaiah Philmore and James Farr and part of it is because Stainbrook is late in getting back into the lane. This makes Xavier's rotations bad, because a forward ends up running out while a guard sinks.

To fix this, Xavier needs to make sure that they don't get caught under-rotating and not allow the baseline. Once someone gets beaten to the baseline, the other corner becomes wide open as the help side man drops. As this screenshot of a YouTube video shows, slow baseline defense leaves a wide open gap on the back. 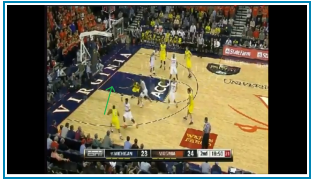 Xavier can combat this by getting the guards farther out (see above) and by insisting that big men don't get beaten to the baseline. A hard closeout to a corner player must feature a Xavier defender shading back toward the inside, where the pack waits.

The packline defense certainly can work in the Big East. Arizona's success in making themselves the number one defense in the nation shows that the concept is not inherently flawed. The three point line is always going to be a weakness of the defense, simply because of its designed purpose. Xavier can takes steps to address that issue by moving the pack out, not hedging so hard, and perfecting the rotation. Hopefully, the St. John's victory is the beginning of reemergence of the Musketeers defense.