Whelan Watch: 1/7- Xavier in the polls

A new year has dawned, has it brought with it some national recognition for Xavier's basketball squad?

Share All sharing options for: Whelan Watch: 1/7- Xavier in the polls

It's been awhile since we ran a Whelan Watch for the very simple reason that there isn't a whole lot to report. Now that the team is riding a six game winner and sporting the 13th toughest schedule in the nation, it seemed logical to revisit the national polls and see just what level of respect the team is now garnering. 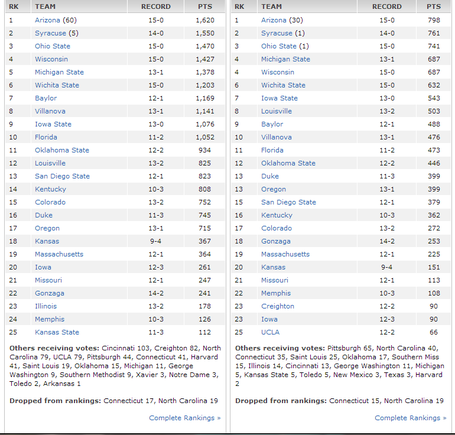 As you can see there, it's pretty much the normal level of respect. Xavier received three votes in the AP Poll, so I guess that isn't nothing, but they are still a long way from making an impact on either. This week Xavier takes on Marquette, who started the year ranked but isn't now, and Creighton, who should be much higher in both polls. If you care about such things, two wins here would bump Xavier toward the very top of the others receiving votes list.

If polls and the incredibly fallible human element aren't your cup of tea, there are two numbers systems to take into consideration. One is the BPI from ESPN. While it sounds a lot like RPI, it's actually useful and not a complete waste of your time. (It's also not a large crutch for the selection committee, unfortunately). In the BPI, Xavier currently sits in a very respectable 30th.

There is also, of course, our much beloved KenPom rankings. Pomeroy's work is beginning to get the traction it deserves, and bracketologists like Joe Lunardi rely heavily on it to project the field of 68 come March. Currently, Xavier sits at 29th in the KenPom.

So there you have it. Xavier isn't getting much love from voters, but both computer systems have them placed very well for an NCAA bid come March.

Whelan's status: Hopefully feeling some secret guilt that he got his teeth fixed.