Share All sharing options for: The Revised Ohio Cup

It turns out I was not alone in desiring a tournament in which Ohio basketball programs could square off for dominance and state-wide bragging rights. Some astute folks in our comments section and equally savvy Twitter acquaintances pointed out a couple of flaws that could use some ironing out, so here I am, back for more.

The number one problem was that Thad Matta seems opposed to the idea in any form. He doesn't schedule the toughest local teams, and I doubt a mild stirring from the proletariat is going to change that any time soon. Undeterred, we'll charge on into theoretical territory.

The other oft-raised concern was the fact that there would be eight teams representing six conferences. The probability of conference opponents facing off against each other is practically 100%, which is a definite sticking point in our planning process that will never get this far in reality. This, however, is less insurmountable.

One possible solution is to shrink the field to six teams. Xavier, OSU, UC, and Dayton will be automatically in. If it helps your sense of fairness not be offended, think of them as the best Ohio teams in their respective conferences. Joining them will be the Ohio teams that finished highest in the MAC and Horizon leagues in the previous season. These six teams are split into two three-team pools, almost like the World Cup.

At this point, I think it will be easier to show my work than try to explain it with words. 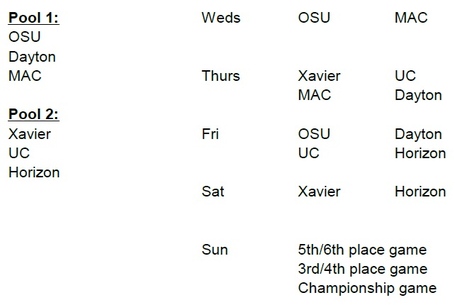 If I got to make decisions like this, I would go with the original format. Given the choice between having a chance to play the biggest programs in the state on national TV or sitting at home eating leftovers, I think the coaches in the Horizon and MAC would take the former. From there, it's just a matter of putting pressure on the league to relax and let them go at it.

What you see here is my best effort to put something together on the fly that addresses some of the valid concerns about the original. If the six-team format was decided upon, I guess I'd bite the bullet and move the Horizon League team's opener to Wednesday. That may slightly tarnish the Shootout, but I hate the idea of seeing a team take on three games in three days when nobody else is. Three-team pods are tricky that way.

These are just two of a borderline infinite number of possibilities to make a competition like this happen. If you were the commissioner of the Ohio Cup and the schools were on board, how would you put it together?