Ever wonder what it would look like if the top programs in Ohio played an early-season tournament every year? Probably not, but now you never have to.

This is going to be a little stream of consciousness, so bear with me, but I've figured out a way to solve two problems at once for the Xavier basketball program. The first is what to do with the Crosstown Shootout, which shouldn't be a problem but somehow is. The second is what to do about the fact that we're 1-5 in our last six games of early-season travel tournaments. Also isn't an actual problem, but for the case of this study, it is. What I'm proposing is nothing less than the most sensational early-season basketball tournament in the history of the upper-Midwest: the Ohio Cup.

This is an idea that Brad and I have been batting around for a while now, but it just sprang to life in my mind during my break time at work today. Here is the layout: Ohio has 13 D-1 basketball teams (that I could recall off the top of my head today). I'm suggesting an 11-team tournament that breaks out into an eight-team, everyone-gets-three-games bracket the weekend of Thanksgiving, just like the Battle4Atlantis. It goes a little something like this...

First things first: OSU, X, UC, and UD get placed into the eight-team bracket right away. No Abilene Christian-style warmup games for these programs, because they're the big boys of Ohio basketball. To make the math work, I need a fifth team. I chose OU, because I think they have the best chance of not being abject in any given year. Besides, they just "feel" the next biggest, at least to me.

Next, six teams play on Sunday or Monday to fill the other three spots in the bracket. Youngstown State plays Kent State ("The Battle for Northeast Ohio!"), Cleveland State plays Akron ("The Other Battle for Northeast Ohio!"), and Toledo plays Wright State ("The I-75 Classic!"). The winners take the other three spots. The three losers play round-robin with each other to fill out their weekend schedule. You'll notice that having five teams already in the eight-team bracket means two of the seeded teams will square off in the first round. That's because...

The Crosstown Shootout is a first-round game, every year. My court, your court, neutral site, doesn't matter. This works, and let me tell you why. First of all, everyone but law enforcement officers and emergency medical folks has Thanksgiving off. Tip the game off at 8pm and you have time for everybody to have a nice Thanksgiving with family, take a nap, and throw some turkey between two slices of bread before hitting the road to the game. There's no reason not to have your entire fan base there because it's a national holiday.

By putting the game in prime time and in the first round, you shoot a little extra life back into the rivalry. Win and you have bragging rights in the city and a great chance at leaving the weekend with three KenPom top-100 games. Lose and you're playing out the weekend in envy and shame, slogging through the kiddie pool. Give me two rabid fan bases (well, one and a half) squaring off in a game with big implications at a time where the rest of the nation will be tuning in over leftovers and desserts. What's not to love? And the winner gets the winner of the UD game. Can you imagine X playing UC and UD within 24 or so hours? Everybody wins (except the teams who lose).

Here's what the bracket would look like. Forgive my rudimentary graphics; I'm not here because of my computer skills. I know it looks a little busy, but if you take a moment to follow it, it becomes clear who is going where if they win or lose. 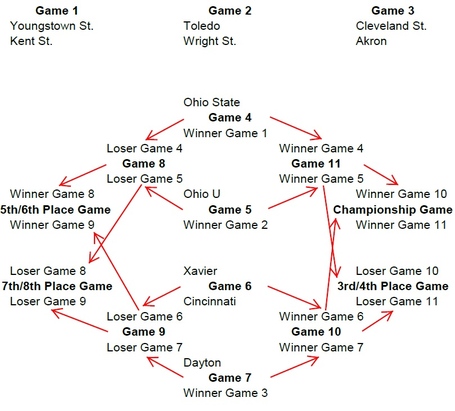 That last point, sadly, kind of sums it up. For whatever reason(s), you just don't see regional tournaments like this, which is a shame. Rotating the Cup between the three (or four, depending on Cincinnati's readiness) appropriate sites would be a lot of fun, and I know I would look forward to the even every year. What about you? With the cavaet that it's never going to happen, is this the kind of thing that would get you excited as a fan?