The Big East at the Halfway Point: Part Two

The conference is starting to sort itself out, and there are fewer teams with a shot at the title than there were a month ago. These six teams have all given their fanbases at least a little bit of hope to hold.

Share All sharing options for: The Big East at the Halfway Point: Part Two

When I pitched this idea to Brad, I wrote a brilliant opening paragraph and emailed it to him as an example of where I would go with my half. He stole it word-for-word and posted it earlier in Part One.

The favorites:
Unless something surprising happens, one of these two teams is going to win the conference.

Creighton (7-1)
Current status: Creighton is currently pouring in points in a manner not unlike what we all expected. Doug McDermott is a national player of the year contender, Ethan Wragge is fifth in the league in FG% despite having taken only one two-point shot, and the rest of the players are filling roles and executing well. What is surprising about the Bluejays (other than the fact that they spell their nickname without a space) is that they also lead the league in defensive efficiency. You wouldn't expect a team full of shooters to also be smothering on D, but they allow the league's second-lowest EFG% and lead in DReb% and opponents' free-throw rate.

How that could change: The obvious is defense. The team is not playing significantly over its head on offense, but I would be surprised to see them continue to dominate defensively. The only other potential spanner in the works would be a team forcing them into (or taking advantage of) a poor shooting night the way Providence did. If Creighton does drop, I'm going to go out on a limb and guess that it will be because someone outgunned them, not because someone held their offense down.

Villanova (7-1)
Current status: After playing lock-down defense throughout the non-conference schedule, Villanova has taken a step back in Big East play. Their defensive efficiency is ten points higher than it was against non-conference foes, though that is still good enough to leave them at third in the conference. They have roared to a 7-1 start in the league by keeping up their offensive output. They're 11th in the nation in offensive efficiency, thanks in large part to being almost as frequent and successful a three-point shooting team as Creighton is. While the Jays are 9th in the conference in getting to the line, though, Villanova is second.

How that could change: Nova actually has room to improve, mostly by getting back to locking teams down on defense. They got fat on the Lafayettes of the NCAA world, but they also held Kansas to 59 points in 71 possessions in the Bahamas and a decent La Salle squad to 52 on 68 possessions. The flip side for a team so reliant on three-point baskets is that sometimes threes don't fall. If Nova hits the road and can't find the range in an unfamiliar gym and can't get to the line with unfriendly officials, they can be in for a surprising stumble. On the other hand, they could run the table if their defense gets hot.

The contenders:
If the above teams have more difficulty than anticipated getting through the Big East, one of these squads will be waiting to take advantage.

Providence (5-2)
Current status: Providence brought back a tough roster and had some talent coming in, but injuries and other attritional factors have seriously thinned them out. A slow pace on offense has helped them out, as has their ability to hit the boards (OReb% or 35.1% is best in the BE), and get to the line and covert (first in free throw rate, second in FT%). Their defense has been middle of the pack, but you can't beat them from outside and they're tough to rebound against at that end as well.

How that could change: Fatigue. Friars forward LaDontae Henton is averaging almost 41 minutes per game in conference play; guard/hero Bryce Cotton is averaging almost 43. To get his average in minutes, Henton has to continue playing during the first media timeout, and Cotton basically can't sit down until halftime. A lot of what Providence does (closing down the perimeter, banging the boards) requires a ton of effort, and they have the thinnest bench in the conference by a wide margin. If one more member of this squad breaks down, I think the whole thing breaks down. If not, they have a puncher's chance against anyone, as Creighton learned.

Xavier (5-2)
Current status: A wide-open offensive machine. Xavier is the fastest-playing team in the conference and third in offensive efficiency. X is shooting well from inside and outside the arc, second in the league in OReb% and - most surprisingly - the best in the Big East from the free throw line. Things aren't so rosy at the other end, where X is 8th in the league in defensive efficiency. The Muskies still own the boards at that end, but teams are shooting a staggering 43.2% from behind the arc against a defense that is last in the league in forcing turnovers.

How that could change: Improve the defense. Xavier's offense has been at least "good enough" even in games in which they have struggled, but you're not going to do a lot of winning when you're consistently getting gashed. Coach Mack loves defense, and he is no doubt working to get the ship turned around. If he does, X can make up ground in the standings. If he doesn't, any team that can get hot from deep is suddenly scary, and that trip to Seton Hall looks rife with potential embarrassment.

The dark horses:
These teams are likely too far adrift to make a serious run for the conference title, but they can still play themselves into home white in the second round of the Big East tournament.

Marquette (3-4)
Current status: The Golden Eagles have just struggled to get the ball in the basket this year, and some bad luck hasn't helped them, either. They're shooting a deplorable 28.1% from behind the arc in conference, and they're shooting more threes than they did in the non-conference season as opponents sag off of them. They has a shot to pick up a decent away win against Butler but lost it in OT, then suffered the same fate at home against Nova a week later. Pull either of those games out and they're 5-2 and right in the thick of things. Defensively, they are porous around the arc and not great at hitting the boards.

How that could change: With 6 of 11 remaining games at home, Marquette has to turn up the defense to have a chance to get back into the race. Their defensive efficiency - though fattened by 7 wins against teams 190 or below in the Pomeroy ratings - was ten points better in non-conference than it is against the Big East. If they can shore things up around the perimeter (where Big East teams are shooting at will and connecting at a 40% clip), there's a chance they can surge back into the race and finish with 11 or 12 conference wins. If they keep up the lackluster defensive effort and hope their offense comes to the rescue, Buzz Williams will be a studio analyst somewhere this March.

Seton Hall (3-4)
Current status: Despite losing to every real non-conference opponent they played plus Saint Peter's, Seton Hall isn't in appreciably worse position than pre-season darling Marquette (who only beat them by one) at this point. Despite having already played Nova and Creighton, they're still third in the league in 3P% defense. Their own 3P% - already solid in non-conference play - has jumped to 41.5% against Big East teams. Rebounding is a problem for the Pirates, as they are 4th in the league in DReb% but dead last with an OReb% of 20%. If the shots stop falling, they're not going to collect a lot of second-chance points.

How that could change: Probably only for the worse. They still have to travel to Creighton and Villanova and - aside from their upcoming home game against Butler - they don't have a single game left on the schedule that Ken Pomeroy gives them more than a 60% chance of winning. With a defense that doesn't force a lot of turnovers and doesn't limit attempts from beyond the arc, they're asking for trouble against a league that shoots 36% on aggregate. If their own three-point shooting cools down, they don't have the firepower to hang with the top teams in the league. They're still within striking distance in the standings now, but I'm afraid that's mostly illusory.

That's the whole league. Below is my best guess regarding who is going to be seeded where in the Big East tournament. 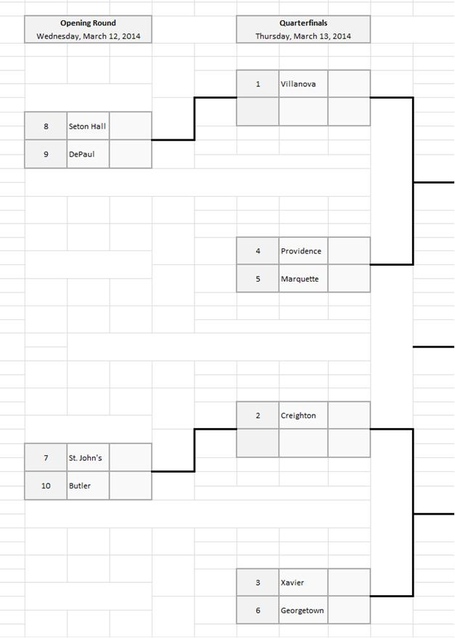