Whelan Watch 1/27: Xavier in the polls

This week's peek into the carnival of absurdity that is the national polls reveals that American is worthy of your praise, adulation, and envy. Yes, American is receiving votes and Xavier isn't.

Share All sharing options for: Whelan Watch 1/27: Xavier in the polls

It's been 20 days since we last saw where the Musketeers landed in the national polls. In that time Xavier has gone 3-2, beating Marquette, Georgetown, and DePaul, but dropping road games to Creighton and Providence. As you might expect, that has had about the usual impact on where Xavier is ranked. 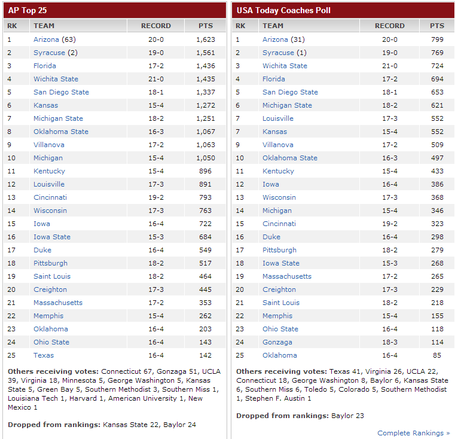 Yes, Xavier has dropped back out of the ranks of teams garnering votes in either poll. That's not entirely surprising, as the polls generally reward teams that have already appeared and punish those trying to work their way on. Like any human system, they are heavily subject to confirmation bias.

Please note though, that even in the world of the absurd there are overachievers. Enter John Feinstein. If that name sounds familiar to you, it's probably because you like golf or listen to a lot of CBS Sports Radio. Feinstein wrote a book about the 1986 Indiana Hoosiers, but it's not clear what his other connections to basketball are. That doesn't keep Feinstein from voting in the AP poll, and this week it didn't keep him from ranking George Washington and American University. Yes, American. American is currently 95th in KenPom and 138th in BPI. How on earth they are the 25th best team in the nation is a question only John Feinstein can answer.

Over on the coaches side, Stephen F. Austin (54/91) and Toledo (75/66) both brought in more votes than did Xavier. VCU (27/28) has an even better computer argument for being ranked than do the Musketeers, and was also snubbed by both groups. KenPom and the BPI both are quite certain that Xavier is the 30th best team in the nation right now. After this week, that seems just about right.

Unless, of course, the AP thinks maybe UC Irvine is getting hot at just the right time.

Whelan's status: Working in a top secret lab (shaped like a tooth, of course) to come up with a way to get the national polls fixed.