A Harbinger of Basketball Season

The leaves are starting to turn, the Indians are fading like cut grass, and there is soccer on TV. Basketball season is on the way.

Share All sharing options for: A Harbinger of Basketball Season

Before the beginning of basketball season every year, each Xavier player participates in the fitness test known as the Xavier mile. The team rolls out to the track at six in the morning to run a single mile that will determine their fates for the next two weeks. If you hit or beat the goal time for your position, you've passed. If you don't, it's two more weeks of 6am workouts for you. Coach Mack tweeted out this year's top times in this handy little infographic. 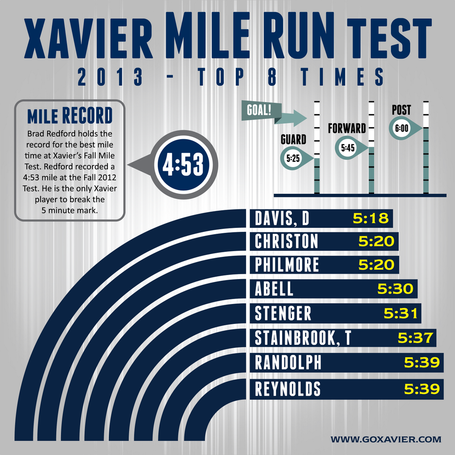 Next time you're watching a Xavier game and griping about whoever is your favorite whipping boy this season, keep in mind that everyone on the team can put down a sub-6:00 mile and the guards are running them at under 5:25. That's not going to get you to the Olympics, but it's still a standard that most of the folks in the stands can't hope to attain. Of course, not everyone gets there on the first try.

To the couple of guys that didn't make our mile time, here's a Chinese Proverb to think about, "Fall down seven times, stand up eight."

There you have it, gang. Keep your respective chins up. More importantly (for me), though, is the fact that the Xavier mile is in the books. Another hurdle between the interminable summer and the imminent basketball season has been cleared.