Share All sharing options for: Three-point Shooting and Xavier Success

If you missed the first installment of our somewhat impromptu study on the effect of the three-point basket on Xavier's fortunes, do flip back and peruse it here. For those of you who have already done your required reading, we forge ahead.

It's no secret that Xavier has struggled to score the basketball at times this season. Thanks largely to their work from inside the arc (51.5%, 43rd in the country) and on the offensive glass (35.5% OReb%, 67th), Xavier's offense is still just inside the top 100 in overall in adjusted efficiency (97th, as of this writing). That's fairly respectable, but - coupled with Xavier's defense that is also in that "fairly respectable" range - likely leads to an NIT bid at best for this team.

Further, it's fairly obvious to anyone watching the games that the offense is at times almost incomprehensibly inert. I haven't crunched the numbers to back this up, but it seems like every loss except the UC game has been shaping up to be a potential win until an offensive drought of anywhere between four and eight minutes has doomed Xavier to second best in a two-team contest. Since the NCAA does not allow in-season trades, it is up to strategic tweaks to take care of Xavier's scoring problem. Many could be suggested, but here we are going to focus on just one: should Xavier shoot more threes?

That, of course, begs the question: is the amount of threes Xavier is currently shooting insufficient? Depending on who you ask, the answer is probably going to be yes. The Muskies' team 3P% of 33.8% places them 156th in the nation, but their three-point frequency (measured as percentage of all field goal attempts taken from behind the arc) of 26.4% is 304th. In raw numbers, Xavier averages making 4.6 threes on 13.5 attempts per game, or 4.15 on 13.15 if you ignore the Fairleigh Dickinson game. You would assume that a team that is mediocre at three-point shooting would take a moderate amount of threes, but instead Xavier avoids the long-range shot like the plague.

There are a lot of different ways to approach Xavier's strategy, so I'll just touch on a couple here before opening it up to comments. If you assume that Xavier continues to shoot threes and twos as effectively as they are now and factor in the percentage of Xavier misses that turn into new possessions through the magic of the offensive rebound, a three-point attempt is worth about 1.26 points for X right now, while a two-point attempt is worth 1.21. Even eliminating the bloodletting against FDU, those numbers are 1.20 and 1.19, respectively. When you consider the facts that two-point shots both lead to more offensive rebounds and more fouls on the opponent and that those rebounds are more likely to happen in positions more advantageous to the offense, it's reasonable to assume that the points-per-attempt yield from either type of shot is about the same for Xavier right now. Ten minutes of light mathing shot in the rear and we're no closer to an answer.

On a game-by-game basis, I looked at Xavier's points per possession to see if I could draw any conclusions from it in regards to how well/often the Muskies shot from deep. This is more reflective of the team's offensive output than the result would be, as it isolates the end of the floor currently in question. For the purposes of this study, I have eliminated the FDU game from further calculations in order to get a clean look at only Xavier's competitive games; I feel like that will make the results more instructive going forward, as FDU is far and away worse than any team remaining on the schedule. 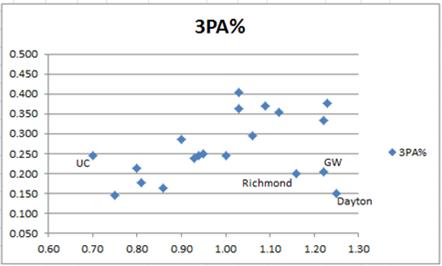 If shooting more threes is the answer to Xavier's offensive problems - and keep in mind I'm simplifying and generalizing the argument with that statement - then there should be a correlation what percentage of Xavier's field goal attempts come from behind the arc and how many points per possession Xavier scores. The good news for this hypothesis is that there is; the bad news is that it's not a very strong one. There are a couple of outliers on the chart there. The UC game featured very poor offense with an almost average ratio of threes taken. On the other end, Xavier's offense was effective against Dayton, Richmond, and GW despite a relative paucity of three-point attempts. 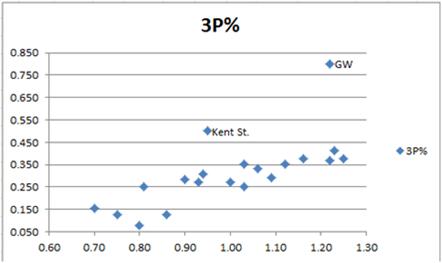 The correlation between Xavier's PPP and their 3P%, however, is almost twice as strong. With the exception of their 6-12 performance from downtown against Kent State, the Muskies' offensive production has been closely tied to their ability to hit from three. Interestingly enough, they correlation between three-pointers made and PPP for Xavier is only infinitesimally different from the 3P% number. It's almost equally important to Xavier to make a high rate of threes as it is to make a high number of them.

When Xavier's single-game three-point shooting percentage is above their post-FDU season average, they are 7-2. In those games, the Muskies are 51-123 (41.5%) from deep. In the other 11 competitive games, X is 4-7, putting up a 32-140 (22.9%) mark. Staggeringly, Xavier's seven worst three-point percentage games are all losses, as are the seven games in which Xavier made the fewest threes (there is significant overlap between the samples). If the team doesn't do better than 27.3% from deep, they are 0-7. In all other games, they are 12-2. For the record, Xavier is 3-4 in their seven worst 2P% games and 4-3 in their seven games with the fewest two-pointers made and 3-4 in their seven worst FT% and FTM games. I didn't think the three-point shot was such a vital trigger for Xavier's offense, but it looks like I might have been wrong about that.

Aside from the numbers, though, there is a psychological benefit in being able to score from beyond the arc. Xavier plays at an incredibly slow pace, and that tendency can combine with their inability to make three-point baskets (or complete three-point plays, thanks to their 64.6% mark from the line) to make relatively small deficits seem fairly insurmountable. A team that has Xavier in such a hole isn't going to feel threatened that X is going to rip off a bushel of quick points to get back in control of the game.

Despite how frustrating the Xavier offense can be to watch sometimes, I don't think adding emphasis on the three-point line is the answer. Unfortunately, it is a question of personnel as much as strategy for the Muskies. Brad Redford is the obvious go-to guy, but Xavier's opponents have demonstrated an awareness of that, especially in conference play. Dee Davis is efficient but not prolific from range, and he needs an extra whisker of space to get his shot off. The more he looks for it, the more it's going to be covered up, and I don't think he is a good enough shooter at this point to be effective in forcing. On down the line are Justin Martin (16-59, 27.1%), Semaj Christon (3-19, 15.8%), Jeff Robinson (2-18, 11.1%), and Isaiah Philmore (1-12, 8.3%). None of those guys inspire a lot of confidence as shooters. There's a reason Xavier's opponents hang off of those guys and a reason they don't make anyone pay for it.

In case all that was a bit long and/or mathy for you to read, here's the summation:
-Xavier is a decent offensive team that scores better from inside and loves a slow tempo.

-Xavier shoots the three less often than almost anyone else in the country.

-There is a solid correlation between Xavier's 3PA% and their scoring.

-There's an even stronger correlation between Xavier's 3P% and their scoring.

-Correlation does not prove causation.

-Xavier probably doesn't have the personnel to effectively shoot more threes, even if they want to strategically (which they do).