Almost every analysis article I type gets away from me at least a little bit, and this one is no different. What began as a quick look at who assists Brad Redford's threes turned into something a bit more than that.

A comment on our recap of Xavier's somewhat disheartening loss to St. Joseph's suggested that it's possible that Xavier would benefit from putting more of an offensive focus on attempting (and ostensibly making) three-point shots. Since Xavier has the mid-week off coming up to their trip to Duquesne, I thought I would take a moment and see if there was perhaps a statistical link between the game-by-game success of this year's team and their willingness to lift from deep. The second portion of this little study will run Thursday, provided the numbers cooperate with me. The first portion can be found below.

Brad Redford showed up on campus with a reputation as a dead-eye three-point shooter, and his career has done little to disappoint in that regard. He has taken an almost comical 89.1% of his collegiate field goal attempts from behind the arc. Even more impressively, he doesn't seem to grow any less accurate as he back away from the bucket. Of his 410 career three-point attempts, he has connected on 173 of them, or 42.2%. He is currently sitting at 21 of 50 from inside the arc (yes, on his career), which ciphers out to be 42% even. Setting aside for a moment the various strategic reasons one might wander inside 20'6", there is little numerical benefit in doing so for Redford.

For someone as successful as he is from distance, Brad Redford has a tendency to run dramatically hot and cold as a shooter. He started this season on a 9-11 (81.8%) run which followed up by going 2 of his next 14 (14.3%). No sooner had that wave passed, though, than did Redford go 7-13 (53.8%) over a three-game span that included his going 4-5 in shooting Xavier past a game Kent State squad. Xavier lost their next four games after that, though, and Redford went 5-19 (26.3%) in that slump. The team bounced back to win their next four in concert with the beginning of the conference season, and Redford was similarly hot in making 18 of 31 (58.1%) during that time. In the team's current 1-3 skid, however, Redford is shooting just 3-13 (23.1%) from three-point range.

In fact, in Xavier's wins (in case I was being too subtle about the point above) Redford is more prolific in three-point attempts (5.4), made three-point baskets (2.9), and three-point shooting percentage (53.8%) than he is in Xavier's losses (1 3PM, 4 3PA, 25% 3P%). When Redford makes more than one three-pointer, Xavier is 8-2. When he hits 1 or 0, the Muskies are 4-7. It then seems fairly obvious that there is some link between Redford's three-point shooting and Xavier's success as a team. To try to delve into that a little bit more, I checked out how Brad gets his shots from deep. 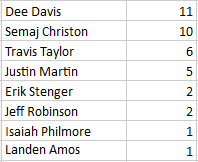 Of the 44 threes that Redford has hit this year, 38 have been assisted. With the team as a whole receiving an assist on just over a hair over half of their made baskets, it's clear that Redford's reputation for being a catch-and-shoot player is well-earned. The chart to your right shows exactly who has been assisting Redford's threes. It breaks down pretty much as you would suspect.

It's no surprise that Davis and Christon top the table, as they are point guards and the team's leading assist men. Between the fact their roles in initiating the offense, finding Redford open in transition, and triggering the out of bounds play where Redford shoots from the corner, their numbers are about as expected. Travis Taylor is Xavier's most active post player, so it's no surprise that he would be next on the list due to his ability to kick out to punish post help. A quarter of all the assists Justin Martin has recorded on the year have been on three-point buckets for Redford. The rest of the numbers on the list are statistical ephemera.

So what does that tell us about how Xavier can maximize Redford's impact on games going forward? Well, with those numbers in hand, I formed the following hypothesis: between Davis and Christon's penetrate and kick abilities and Taylor's work on the post, I would think that games in which those elements were in play would lead to more clean and converted looks for Redford. After all, if those three guys are getting into the lane with enough effectiveness to collapse the defense, it would stand to reason that Redford would be the beneficiary of the defense's divided attention.

To test this theory, I looked into how many points Xavier is scoring in the paint as a rough measure of how effective they are being at getting the ball into the middle. I then took that number and framed it as a ratio of Xavier's total points scored, minus those scored by Redford. My thinking was that this would isolate how effective the team was at scoring from inside as opposed to outside without having the numbers skewed by Redford's own effectiveness. For example, Xavier scored a total of 117 points against FDU. They scored 48 of those in the paint, 50 of those outside of the paint but not from Redford, and 19 from Redford. Their non-Redford outside of paint ratio was 48/98, or 49%. I figured that the higher that number becomes, the more dominant Xavier is in the paint, so therefore the more chances to be effective Redford would have.

Was I right? In a word, no. In lots of words, it was actually the exact reverse. The more effective people other than Redford have been in the lane, the less effective he has been as a three-point shooter. In games in which Xavier has gotten more than 60% of their non-Redford points in the paint, Redford is shooting 9-29 (31%) from behind the arc. In the rest of Xavier's game's, he is 35-72 (48.6%). Lower the number to 55% and Redford is 20-53 (37.7%) when the team is above and 24-48 (50%) when below. Finessing the numbers around doesn't really change the fact that Redford is better when Xavier gets worse in the paint.

So what did we learn? Well, other than maybe the fact that I have a lot of time on my hands, not too much. Redford does the bulk of his damage on catch and shoot situations, which isn't exactly a revelation. Xavier is also more successful as a team when Brad is scoring from long range, which is also maybe not earth-shattering. There's a chance that the reverse correlation is causative here; teams that limit Xavier's percentage of buckets scored inside are so focused on the middle that Redford gets more looks from deep. Or it's possible that there's no relationship between points in the paint and whatever it is that allows Redford to get buckets from behind the arc. Or maybe it's none of these things. I know we've got some clever people reading this stuff; what, if anything, is the connection between Redford's scoring and Xavier's inside strategy? If there is no connection - and even if there is, what explains the correlation between Redford's scoring and Xavier's success?