Let's be honest here: Xavier is sitting at 12-9 and not playing in a power conference. The odds of the Muskies resurfacing in the polls are fairly slim, barring a mythical unbeaten run. Xavier teams have done that in the past, so I'm not ruling it out. In the meantime, let's see which 25 teams made it into the voters' hearts this week. Keep the faith, Xavier/Whelan fans: X will be back. 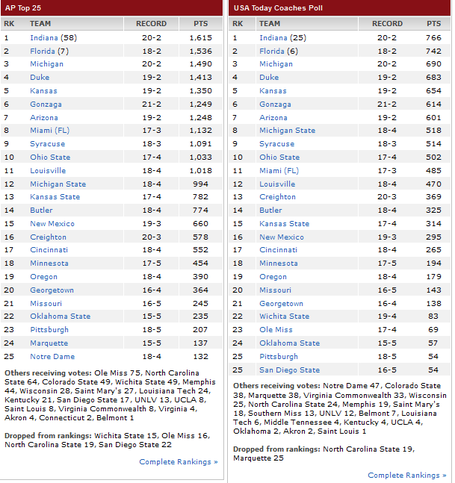 Obviously, it's not this week that is going to see Xavier get back into the top 25. Next week won't be it, either, as Xavier has just the one game on Saturday, and nothing that can happen there could reasonably be expected to get Xavier votes. The season doesn't end in February, though, so the team still has a shot to string together a nice run and get Tim Whelan his teeth back. There's nothing the voters like more than success in March, and that more than anything is Xavier's calling card.

All is not completely dark, though; Matt Stainbrook came through today with another Tim Whelan word of the week. If nothing else, this continued exercise shows that Whelan is still functioning on a cognitive level, and his interaction seems to demonstrate that he is in good spirits, as well. Much like Douglas Mawson, Whelan trudges on a long and lonesome journey with no guarantee of a happy ending. While nobody would blame Whelan for getting his teeth fixed before his skull decomposes, our tragic hero's continual struggle against the odds is nothing less than an inspiration triumph of the human spirit.

The second @twhelan14 word of the week is: GEEKED ~ meaning to be excited about something. #TimWhelan #WOTW

Used in a sentence: I was geeked when I saw Tim get in the game! #TimWhelan #WOTW