Last week, for the fifth week in a row, the team that was atop the polls suffered a defeat. Such ignominy is the kind of blow that can legitimately damage the self-image of a team for weeks to come, if not for the remainder of the whole season. Being not only a strategist but also a leader of men, Coach Mack has devised a wily plan for avoiding such a confidence crushing blow: don't become the number one team in the polls. He has executed that ploy to perfection so far this season, but Xavier still needs to get in the polls so Tim Whelan can get his face fixed. Is this their week? 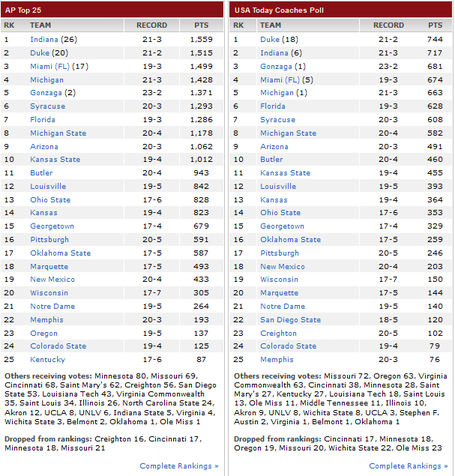 As I'm sure you noticed, (a) there are only so many way I can set up the big reveal and (b) those are getting progressively more ridiculous. Suffice it to say, Xavier's road win over hapless Duquesne wasn't the result it took for the Muskies to impress the pollsters. After briefly appearing in the receiving votes section, XU has been under the radar for the long haul this year.

As March is now rapidly approaching - or rather, approaching at the same pace, but getting much closer than it had been - talk of the possibility of an at-large bid for Xavier has begun cropping up at the various Musketeer fan haunts across the internet. Brad breaks it down in more detail here, but suffice it to say things don't look good. With dates against Fordham and at Dayton this week, Xavier likely needs to go 2-0 over the next seven days to keep any hope of not needing the auto bid alive.

This week's Tim Whelan Word of the Week is once again courtesy of the sartorially elite Matt Stainbrook, but he gets an assist this time around from your friend and mine Erik Stenger.

The third @twhelan14 word of the week is: ZOOKS ~ deriving from the word basic, to be simple or standard. #WOTW #TimWhelan

Whelan's status: he's gotta be thinking about giving it up, right? Seriously, Tim, nobody will think less of you, and we'll still all yell "SHOOOOOOOOT!" if the ball comes to you in a game.