Another week comes and goes, and another fresh version of the polls is published.

If you remember last week, you no doubt recall that a) Xavier was coming off of a particularly ugly stretch of basketball and b) they picked up a solitary vote in total in both of the polls. It was not much, but it offered some glimmer of unrealistic hope, like a silent lighthouse gleaming in the distance as the tallest mast of your ship slips beneath the waves, leaving you alone in your life raft.

Anyway, Xavier played just once since then. That game probably should have been a cake walk, but instead it was an overtime victory sealed by the free throw shooting of Semaj Christon. With that effort in the books, did Xavier gain any traction in the polls? 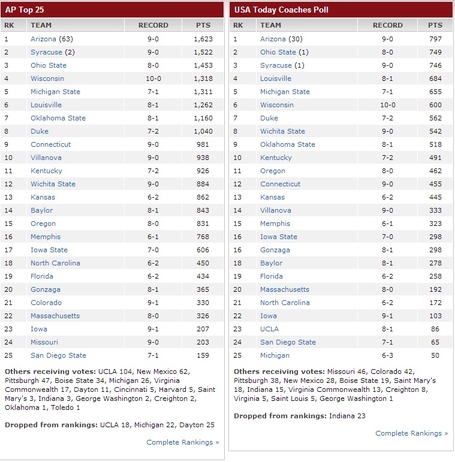 No. Xavier's vote is gone, and I wouldn't be surprised if it was a while until it came back. Coming up this week, Xavier has a home game against Evansville tomorrow and the Shootout on Saturday. Evansville is (obviously) unranked, and UC is getting votes in one of the polls. Hopefully Xavier's showing this week will do enough to at least set the Muskies on their way to having a number by their name.