Our favorite walk-on got some court time this week; will it affect Xavier's standing in the polls?

Last week at this time, Xavier was getting little to no (but mostly no) love in the polls. Two weeks removed from their only recent vote in either column now, Xavier is adrift of having an abitrary, mostly meaningless number beside their name on broadcasts. Still, it's nice to get a little national respect before March comes around and we show up in the Sweet 16 and everyone acts like they knew it all along.

Towards that end, Xavier played not once but twice last week. On Tuesday, a semi-underwhelming effort saw Xavier hold serve against a game Evansville squad. Saturday, Xavier took on yet another mid-major opponent, waxing the floor with Cincinnati in the manner one would anticipate from a Big East team taking on an intracity "rival". Did it do Xavier any good in the polls? 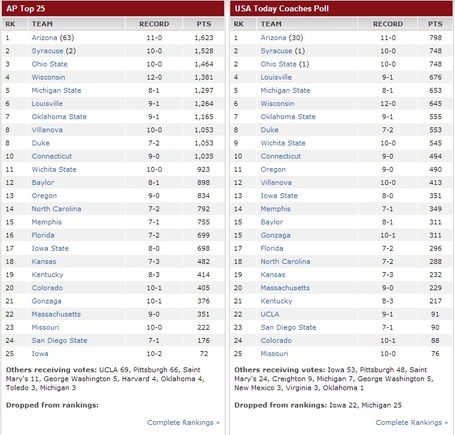 Well, no, not really. The Muskies still didn't get any votes, but I suspect there aren't a lot of long faces around the Cintas Center offices right now. Not just beating but spanking UC launched Xavier 18 places in the Pomeroy rankings, which are more predictive than the polls anyway. Regardless, there's work to be done still if X wants to get on the voters' radar.

This week is a light one owing to finals, but the lone game Xavier has is potentially meaningful. Alabama also is not receiving votes, but they are a quality squad whose schedule strength alone would make them a nice feather in the Musketeer cap in three months or so.

Whelan's status: picking Bearcat fur from his teeth, not giving a rip about dental repairs.