Semaj Isn't Under the Radar, But Xavier is (As Usual)

When previewing a conference with which you are apparently unfamiliar, it's usually best to do some research. That's apparently not a requirement for Grantland's Mark Titus, though.

Share All sharing options for: Semaj Isn't Under the Radar, But Xavier is (As Usual)

Someone has a rudimentary grasp of how to use Google on his chosen web browser, and that someone is Mark Titus over at Grantland. How do I know this? It's simple, really; his Big East preview for that website - at least as far as his coverage for Xavier goes - demonstrates that he punched "big east basketball 2013-2014" into the search bar and clicked the "I'm feeling lucky" button. I'm honestly at a loss to discover what else might have gone on here.

It's a shame, too, because Titus starts out so well when he declares Christon the best pro prospect in the league. I'm more acquainted with Christon's strengths and weaknesses than I am those of most other Big East players, and I know he has some work to do before he's ready for draft day, but any fool can see that the foundation of an NBA player is there. I mean, he's a 6'3" point guard with next-level speed who dunks in traffic. It's been a while since I've run into one of those at the Y.

Once you progress past the part of this particular section that could have been written with a Big East player roster and a dartboard, however, things get murky quickly. Three times, Titus declares that Xavier won't be very good this year. "Xavier probably won't be all that great this season" is the section's opening line, followed later by "if the Musketeers have any chance at making the NCAA tournament, [Semaj]'ll have to carry them," and finally, speaking in the first person as Coach Mack, "Let's be honest - we're not going to be very good this season."

I'm guessing the entirety of Titus' research was looking up Xavier's record last year on ESPN, mispronouncing the school's name a couple of times while watching his mouth move in the mirror, and then forgetting what he was doing and moving on. Sticking with his apparently preferred method of research (checking the first page of results on Google), you can find there's more to the story than that. If you type in "is Xavier going to be good this year" you get the following list of links: 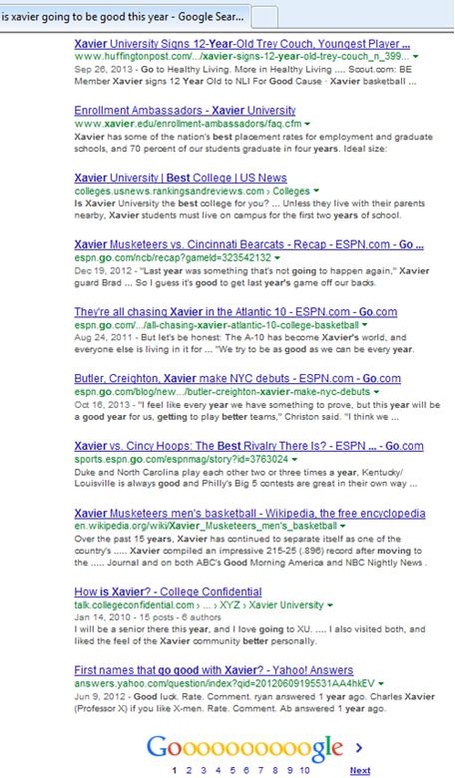 After that heartwarming tale of the team's signing Trey Couch (awww.....), there is a mish-mash of results that might confuse you if you're bad at research or the internet. Persist though, and you can see near the middle of the screen that a Xavier player believes that "this will be a good year for us." Who said that? SEMAJ CHRISTON. If you're writing an article about the Big East and a section about Semaj, maybe you shouldn't dismiss his entire team's chances before even considering them. If you do consider them, you'd think Semaj's name would jump off the page at you at this point. It doesn't look like Titus did even rudimentary research on this front.

Carrying on, he also says that "In my dreams, Christon realized this summer that this is his last season at Xavier and... he'll have to carry them." Have you ever had a dream that you wanted to come true, dear reader? If so, how much effort would you have gone through to make it so? Titus' dream in this case was dependent on someone else, so there's not a lot he could have done on his own to make it happen. He could have at least checked its pulse, though, by typing in "Semaj Christon summer" on Google and getting the following page of results: 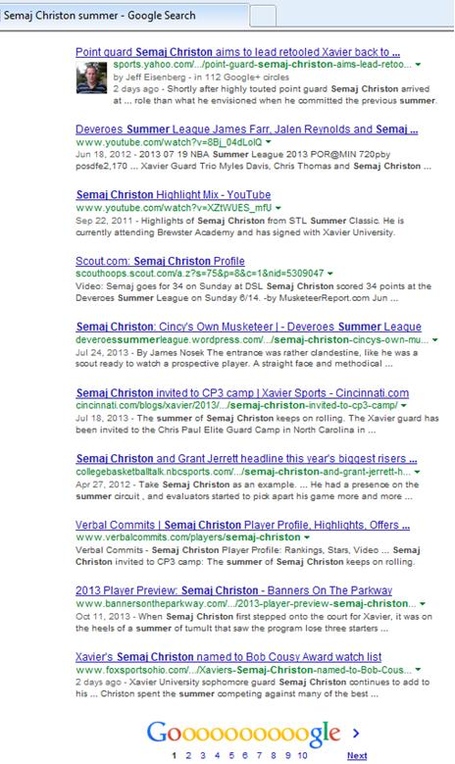 First of all, you should read that Yahoo! write-up if you haven't already; it's really rather good. It was published after Titus' preview, so - ignoring the fact that he could have gotten that information just as easily as the writer of that article did - we won't hold the information within against him. What is far more condemning is the article from Deveroe's Summer League and the blog post of Shannon Russell's. The Summer League article is another good read, and it details how well the off-season was going for Semaj at that point. The blog post of Russell's shows - without even clicking through - that Christon is getting work at some prestigious camps.

If you could be arsed to actually tap the link with your cursor, you'd find that Christon had been invited to the Chris Paul Elite Guard Camp in North Carolina in August and had already attended the Deron Williams/Kyrie Irving Nike Basketball Point Guard Skills Academy in New Jersey and the LeBron James Skills Academy in Las Vegas. Congratulations, Mark Titus! Your dream has already come true! Too bad you're too busy texting your bros about beer pong to take note of it.

I know it's not news that a national outlet is dismissing X or wrongly assessing something going on with our beloved Muskies. It's a Xavier tradition to be overlooked in October and then show up on CBS in March. But this isn't high-level stuff here. I didn't have to work any computer voodoo or leverage any of my numerous contacts within the organization (I'm friends with Tim Whelan on Facebook!) to get this information. I spent less than five minutes typing the most elementary phrases I could think of into Google. That Mark Titus couldn't be bother to do that as he was pulling this write-up out of his rear end doesn't make him a bad person. It does mean he's a hack, though, and when his only job is to not be one, that's about bad enough.