One of the great things about NCAA football is that, if you're out of the polls by the midway point of the season, you have absolutely no hope of having even a chance to play for the national championship. I don't know why that's great, but the people I know who love college football assure me it is. Anywho, there are lots of ways to get to the national championship in college basketball, even if you have a stumble or six early on. 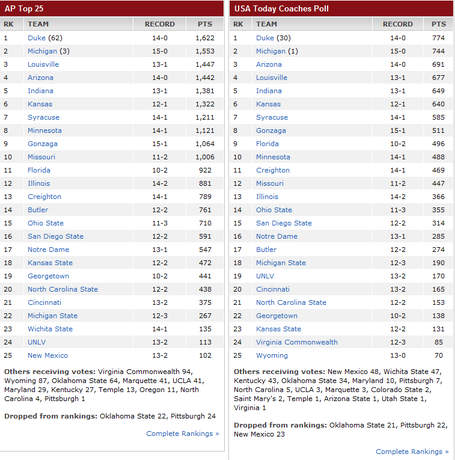 As you can see - and despite being just 20 points from being a one-loss team - Xavier is still not getting any love in the polls. The two weeks we took off from this exercise for the festive period brought mostly just pain for Xavier fans, who have had to endure an ugly slide and a loss to the loathsome Bearcats of UC.

This week, Xavier will be taking on Temple and George Washington, with both games being contested at the Cintas Center. Realistically, there is no outcome from this week that will vault Xavier back into the top 25. A journey of 1,000 miles begins with a single step, however. X needs to start piling up the wins.

Whelan's status: Carving himself a set of false teeth out of whale bone and manliness.