Another week is in the books, and the rankings have once again been updated. College basketball is superior to certain other collegiate sports in that the champion is decided solely by the results on the court; literally every team in the nation whose conference owns an automatic bid begins the season with its destiny in its own hands. Still, it's nice to get a little recognition along the way. Is this the week that Xavier gets their due? 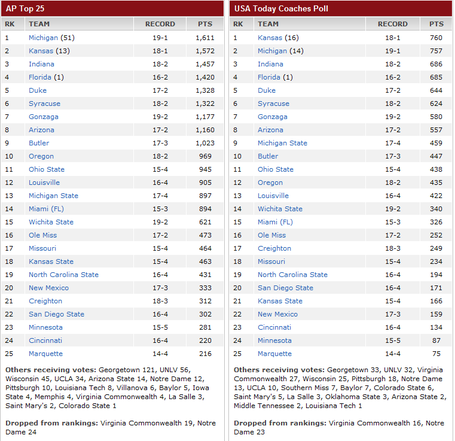 As you can see, Xavier's two losses this week did not do them any favors with the voters. It was always going to be a long climb to get back in the polls' good graces, but not the Muskies are going to have to do something truly special to make that happen. Sitting at 11-7 in a non-BCS conference is not going to pull in a lot of votes, no matter how much you need your teeth back.

What does pull in votes, however, is winning. Winning is something Xavier needs to do as often as possible - if not even more often than that - for the foreseeable future. In a tradition that was established before Brad or I was born, Xavier has a chance to knock off UD at home on Wednesday. From there, X continues a brutal stretch of travel by heading to Richmond on Saturday.

Matt Stainbrook (you guys know Matt, right?) tweeted the Tim Whelan Word of the Week today, marking the first of what we are all hoping is many such occasions. As long as Stainbrook keeps doing that, we'll keep bringing it here for you. Below is this week's word.

The first @twhelan14 word of the week is: BUFF ~meaning to nap or sleep. #TimWhelan #WOTW

Originating from when a video is loading or "buffering", in which the video "takes a nap". #TimWhelan #WOTW

Used in a sentence: I'm so tired I cannot wait to go home and buff. #TimWhelan #WOTW


Whelan's status: flipping through the dictionary in a search for synonyms of "toothless" that don't exist yet.