Coming off a pivotal game at GW, Xavier faces another big matchup Saturday afternoon when they face La Salle at the Cintas Center. If it feels like just about every game X has played lately has had big implications, it's because that is true. While that may seem like a whole lot of pressure to some, I prefer to think of it as a positive in that Xavier still has something to play for. Keep winning, and the games keep being big. String together 3 losses in 4 games and suddenly they're a lot less meaningful until there's a chance to play for the auto bid. With 4 of their next 5 and 6 of their next 8 on the road after this one, the Muskies have a chance to make home cooking come good and move to 4-0 in A-10 play.

After an early season loss at home against Central Connecticut that cast them in an unflattering light, the Explorers ripped off six straight wins to move to 7-1 before dropping a close on one the road to a credible Bucknell team. Three more wins against weaker opponents were followed by a road whipping at the hands of Miami, FL. They current sit at 2-1 in the conference, with a road loss against Charlotte and home wins over Richmond and UD (albeit in a nail-biter) to their credit.

Team fingerprint:
The Explorers like to run. They play a lot faster than Xavier prefers to, averaging almost 69 possessions per game to the Muskies' 62.4. Despite this blistering rate, they work with a thin bench, getting less than 25% of their minutes from the reserves. Their experience level is almost bang-on national average, but it is size where they are really hurting. The Explorers are 189th in effective height and 259th in average height, basically meaning they have a very little team (in terms of basketball, not in real life).

La Salle loves to get the ball out and go. (Photo: Howard Smith-USA TODAY Sports)

Because of their size, their offense is mostly guard-oriented. They do an excellent, excellent job protecting the ball, turning it over on only 16.8% of their possessions. That puts them 19th in the country; to do that while running and gunning is very impressive. Shooting is not a problem for the Explorers; they hit 34.9% of their three (100th in the country) and 49.4% from inside the arc (110th in the nation). They do take 35% of their field goal attempts from three, which is a bit above average but by no means extreme. Predictably, they are not a strong offensive rebounding team, owing to their diminutive size and fast pace.

On defense, La Salle thrives on forcing turnovers, doing so on 22.7% of their opponents' possessions. They're all 63rd in the nation in steal%, forcing live-ball turnovers on 11.9% of opponent possessions. The closer to the basket you get, the less rosy things become. Teams shoot a mediocre 32.3% from three, and only get off 25.2% of their field goal attempts from beyond the arc. Past that smothering perimeter, though, opponents shoot 48.4% from inside the arc. Only one team in the country gives up a higher percentage of opponents' points from inside the arc. La Salle is slightly above average on the defensive glass, though, and they are elite at avoiding sending opponents to the line.


Starters:
The player: 6'0", 185 pound junior guard Tyreek Duren
The numbers: 15.0/3.1/3.4 on .430/.339/.776 shooting
More numbers: 15.1% TO rate, 3.5% steal%, 2.1 steals per game
The words: Duren is a fairly reliable handler of the ball for La Salle, though he doesn't spend as much time on it as Galloway. He isn't prolific from deep, but he is definitely enough of a threat to require respect from the opposing defense. Speaking of defense, Duren uses his quickness to good effect on that end of the floor, harrying opposing guards and grabbing more than two steals per game. He also leads the Explorers in minutes, spending nearly 87% of each game on the floor. 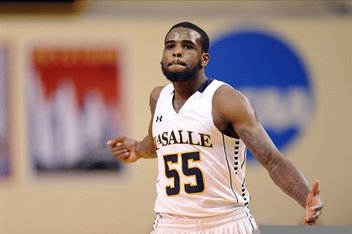 If you want to stop La Salle, you have to handle Ramon Galloway. (Photo: Howard Smith-USA TODAY Sports)

The player: 6'2", 200 pound junior guard Sam Mills
The numbers: 7.5/2.9/2.1 on .345/.313/.789 shooting
More numbers: 2 fouls per forty minutes, 35.3 minutes per game, 13.4 usage rate
The words: Mills is obviously not quite as statistically exciting as his backcourt mates, though he still is getting his college paid for. With three guards on the roster who love to have the ball in their hands as they gobble up possessions, Mills fills the role of the guy who can get up and down the court without demanding the rock. It says something for his ability to fill in the gaps in the team that he leads the squad in minutes per game despite his fairly gruesome shooting line.

The player: 6'8", 240 pound sophomore forward Jerrell Wright
The numbers: 11.1/6.4/1.1 on .558/.000/.630 shooting
More numbers: 13% OReb%, 17.8% DReb%, 24.3% usage rate, 55.8% eFG%
The words: If you're going to start three guards and pull another one off the bench for big minutes, you better have some larger human beings willing to get after it in the paint. Jerrell Wright is that guy for La Salle. He is an aggressive rebounder on both ends of the court and can score with aplomb when given the ball in the post. He is also fairly effective in getting to the line, though not exactly a reliable finisher of those opportunities. La Salle looks to feed him when he's in the game; the fact that he only plays 24 minutes per game is the only thing suppressing his numbers.

The player: 6'11", 245 pound junior center Steve Zack
The numbers: 6.8/6.5/1.2 on .530/.000/.724 shooting
More numbers: 22.2 minutes per game, 11.1% OReb%, 23.6% DReb%, 6% block%
The words: Another big man who roams the lane with bad intentions, Zack helps Wright anchor the paint for La Salle. He is also a good rebounder in the minutes that he gets, but he also adds the threat of being a very good shot blocker. Despite his fairly efficient showing on offense, Zack rarely gets his number called by Coach Giannini.

Three questions:
-Is Dee ready to go? Brad Redford has handled increased ball handling duties fairly well, giving Xavier a much-needed boost in depth and Semaj a much-needed chance to not have to carry the team for the entire game. Despite Redford's proving capable, bringing Dee back into the fold would be great for this team in the upcoming rough stretch. You could see the defensive intensity flag through portions of the St. Bonaventure game as tired legs started giving in on the perimeter; Dee Davis' minutes and hustle are all Xavier have to remedy that issue.

-Can Xavier control the pace? The game against St. Bonaventure ended after 54 possessions. If you know anything about basketball, you know that's a very, very slow pace. If La Salle gets the game into the upper 60s or low 70s in terms of possessions, it's not unreasonable to assume that Xavier will be out of gas before the final horn sounds. Everything about a slower pace favors the Muskies; if they can actually go out there and force one, they have a much better chance of pulling out a win.

-Is Jeff Robinson back in the dog house? JRob put together a fairly effective game against GW, leading once again to speculation that he may recognize the point of the game of basketball. Against St. Bonaventure, though, he wandered the court seeming fairly apathetic before getting lifted for Isaiah Philmore in the clutch minutes. We all know what Robinson has to offer when he's going well and how frustrating he can be to watch when he's not. How long a tether will Chris Mack give him in a game crying out for athletic bigs? 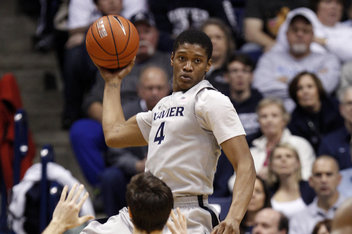 What Taylor being athletic may look like. (Photo: USA Today Sports)

Three keys:
-Post Taylor early and often. X needs to feed Trav both early in the game and early in possessions. Both of La Salle's bigs are wide-bodies, and Taylor's athleticism gives him an advantage in finding good post position early in trips down the court. If he does manage to run them until they need a sub, he'll have a serious height advantage over the next man up for the Explorers. Much like GW, La Salle doesn't give up a whole lot of attempts from behind the arc. Also like GW, they can be opened up by playing inside-out, but that will require an active and involved Travis Taylor.

-Mind the shop. I love offensive rebounding. I love seeing guards slip in and get quick stick backs. The risk involved with that, however, is exposure to the fast break if you don't grab the miss. As much as I hate to say this, Xavier would be better served against La Salle to only send 2-3 players to the glass and get the rest back to guard against easy buckets. Quick chances in transition raise the pace of the game and feed into La Salle's overall plan; Xavier needs to make sure they make getting out and going as difficult as they can.

-Execute from the line. Given nine chances at an unguarded, basically untimed look at the basket from 15 feet away, Semaj converted seven of them against St. Bonaventure. If he comes up short of that mark, Xavier fans are likely staring down the barrel of yet another frustrating loss. There are free points to be had at the line, and La Salle doesn't make a habit of giving up those opportunities. When they do, Xavier needs to make sure they take advantage of them. Like Coach Mack said in the booth after Wednesday's game, missing two free throws is just as bad a return on a possession as a turnover. Getting to the line is nice; scoring from there is what's really important.