If you can choose when to be the top team in the nation, you're going to choose "at the end of the season" over "on January 14th" every time. The one caveat to that, of course, would be if you're waiting to get ranked so you can have your teeth repaired. Such is the situation, in case you haven't heard, in which Tim Whelan finds himself. Whelan no doubt felt a warm glow of satisfaction when he got some court time at the end of the GW game; will he get the same endorphin rush from the polls this week? 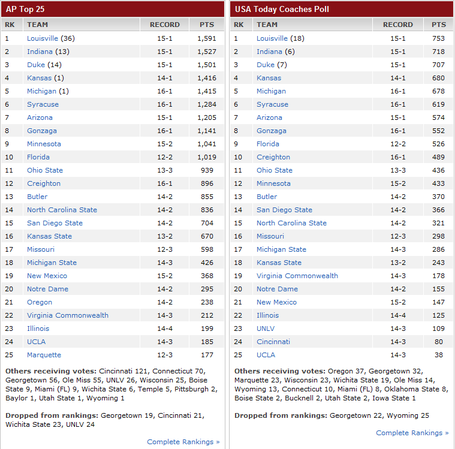 No. No, he will not. I mentioned last week that there was no reasonable outcome from this week's games that would result in Xavier climbing into the top 25, and history has vindicated me. Xavier has begun quietly rebuilding a resume that took quite a beating over the holiday period, picking up another win over an RPI top 50 team in Temple before defending the home court against a GW team that had just spanked St. Bonaventure. Xavier now sits at 9-6 (2-0) and is for the moment atop the A-10 table.

This week, Xavier will travel to that self-same St. Bonaventure team before hosting a surprisingly competent La Salle team over the weekend. Ken Pomeroy has both of these games as functional coin tosses, but Xavier could use another pair of good results to keep their momentum building. The Muskies are heading into a stretch in which seven of their next ten games will be on the road. It's a tough row to hoe, but if the Muskies can put together a string of good results during that run, this team has every chance of fighting back into the rankings.

Whelan's status: Still working out how to bite with his molars.