You've likely heard by now that Charlotte is leaving the Atlantic Ten to pursue greener pastures elsewhere. Actually, that's not categorically true. Charlotte wants to participate in Division 1-A football, and the A-10 doesn't offer that opportunity. Rather than have different conference affiliations for each sport, Charlotte has decided to just pick up its whole operation and move to a different conference. This is both perfectly understandable and frankly not that harmful a move for the conference.

It does, however, leave the A-10 with 13 teams. While this does not preclude the playing of the basketball season (which is what we're all really here about), it does lack the symmetry afforded to leagues with an even number of teams. The conference has made no secret of its desire to add one or both of George Mason and Virginia Commonwealth University, and I have been similarly forthcoming regarding my opinion that George Mason is not the answer if the question has anything to do with the best way to add prestige to the Atlantic Ten as a basketball conference. Last week, we took a peek at the last five years in the programs of Temple and Butler. Today, we'll perform a similar exercise regarding George Mason and VCU and try to outline why I think Mason is not a great potential add for the league.

First of all, let's address the elephant in the room. Yes, I know that George Mason went to the Final Four. Yes, that's pretty awesome. What that does not do, however, is in any way affect the boost they would give the A-10 going forward. That happened in 2006; players whose college choices were influenced by that run are now college graduates (and statistically likely to be unemployed or underemployed, but that's not the point of this article). Since then, George Mason has, by and large, been George Mason. The below chart shows the KenPom rating for George Mason for each of the past five years, with the rating for whoever finished fourth in the A-10 also noted. To wit: 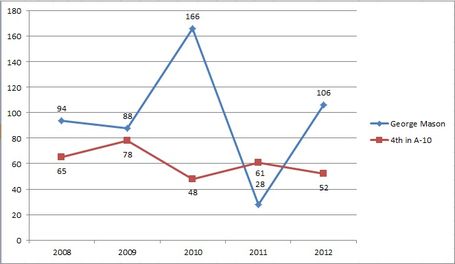 I have previously stated (somewhere) that I think the conference would be best served to try to add teams at the top rather than just muddling along by adding an Eastern Kentucky or someone of the like to make the numbers work. For our purposes, I've defined "at the top" as perennially being able to challenge for one of the byes in the current format of the A-10 tournament. As you can see, George Mason has only done that once in the past five years, with their anomalous 2011 season. If you throw out that season, their average KenPom finish is 114th, good for the 8-9 range in the conference. Even if you include that year, their average finish of 96th would have only cracked the top six twice.

Even worse, there's not compelling evidence that the school is headed in the right direction with its basketball program. The excellent George Mason Basketball blog outlines it in detail here, but the general notion is that coach Jim Larranaga left the school because he didn't feel like it was committed to putting forth the financial resources necessary to compete in the conference, most notably in terms of hiring and retaining assistant coaches. That conference is the CAA, which is generally a one-bid league. The A-10 is a higher-profile conference and requires more commitment to compete. If George Mason isn't willing to pony up the cash to run with the top dogs in the CAA, what makes anyone think they'll do it to avoid being another Fordham in the A-10?

Virginia Commonwealth, interestingly enough, was the school that was paying assistant coaches at a rate that caught Larranaga's eye. They also have a young, talented head man in Shaka Smart who seems committed to the program. Finally, they're consistently putting a good product on the floor and - due to their recent and continuing tournament success - have some name recognition value on a national level. Here, then, is their chart, with the same KenPom numbers as discussed above: 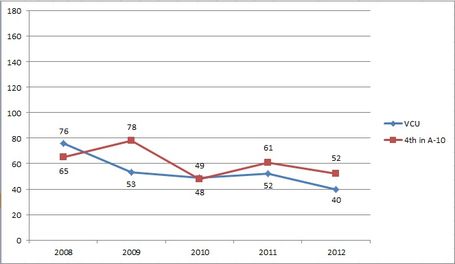 It gets a little difficult to read because VCU has been so consistently comparable to the fourth slot in the A-10, but the contrast between its chart and George Mason's is fairly clear. While George Mason only mustered one finish that would have put it better than sixth in the conference, VCU never once dipped below that mark. Three times in the past five years, the Rams' finish would have been good enough for a bye in the conference tournament, and their average KenPom finish of 54 plants them solidly between third (avg. finish: 51) and fourth (avg. finish: 61) in the conference over the past five seasons.

When I compared Temple to Butler, I offhandedly dismissed the idea of George Mason being a good get for the conference. Since then, I've fielded a few questions regarding why I thought that. I hope this answers it a little more fully. The Atlantic Ten has established itself as a perennial multi-bid league. Despite not being in the BCS, the conference has had too much success of late to be considered truly mid-major. To keep moving forward, the conference has to add teams that will continually challenge for at-large consideration while pushing the other teams in the league to improve or get left behind. VCU does that. George Mason does not.