Share All sharing options for: Does Butler Replace Temple?

Once word leaked out that Temple was leaving the Atlantic Ten - whose title is a misnomer for more than one reason - fans of the conference immediately began to wonder who the leadership of the league would bring in to replace them. With the Owls' return to the Big East - whose title is only a misnomer in the geographical sense - the A-10 needed to land a team with at least a similar pedigree to continue to stand out from the other non-BCS leagues. Today, the announcement that Butler will join the Atlantic Ten when Temple leaves was made official.

Does Butler really replace Temple, though? The Owls were consistently one of the top teams in the conference, and they generally ranked in the top 50 or so teams in the nation, depending on what your preferred method of measuring such things is. The below chart shows a comparison of Butler's and Temple's respective KenPom ratings over the past five years: 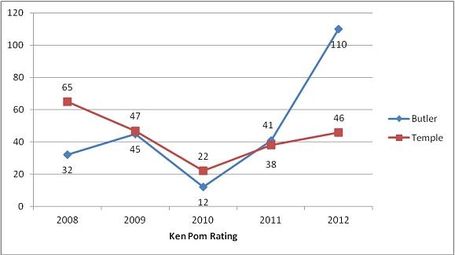 I used five years for a couple of different reasons. One is that it's five years, which is a nice square number. That also happens to correspond with Brad Stevens' first year at Butler and Fran Dunphy's first good year (second overall) at Temple. As you can see, both teams have been solid over that time period, though Butler would not have been described as such last season. Other than that year, though, Butler has actually been slightly superior to Temple.

The league didn't exactly have its pick of the entire nation to replace the Owls, though. Temple was out (for obvious reasons), and it would be unrealistic to assume that even BCS bottom-feeders would leave that much money on the table to come to a non-BCS conference. Realistically, Temple's replacement was going to have to come from a non-BCS conference, which narrowed the field of available, attractive teams considerably. The below chart once again shows the two teams' KenPom rating, but this time only considering their rank among teams outside the Big Six conferences: 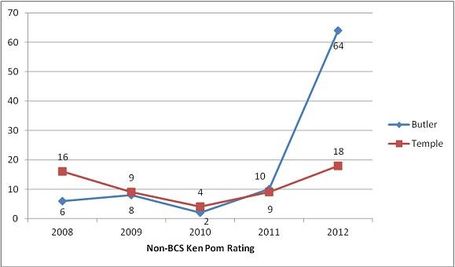 For four of the five years, Butler was not only favorably comparable to Temple, but they were also solidly within the top ten. Obviously, last year was different. Where you stand on the move probably comes down your take on Butler's performance last year. I think it was something of an outlier for the Bulldogs. Brad Stevens is a good coach, he has gotten great results in the past, and the twin factors of bad luck and early departures (Gordon Hayward would have been a senior last year) hamstrung the squad. Going forward, I don't see any reason to assume they won't continue to perform at a high level.

It's also important to remember that the Atlantic Ten is not a BCS league. That means there is always going to be less money on the table to entice new teams to enter. I think the addition of Butler is the right move for the conference. I haven't mentioned it up until this point, but you may recall that Butler went to back-to-back National Championship games a couple of years back. That kind of track record is a huge coup to add to a league. Butler, Memphis, and Gonzaga are the three non-BCS teams that, in addition to Xavier, have established themselves as consistent basketball powers. For various reasons, adding Gonzaga to the league is impossible and adding Memphis is highly unlikely. If the Atlantic Ten wants to be - and wants to be perceived as - the top conference outside of the BCS, adding Butler was a big step in the right direction.

Just in terms of pseudo-journalistic rhetoric, that would be a great place to end this post. However, I still have another point to touch on. Virginia Commonwealth and George Mason have also been mentioned as possible additions to the conference. It should also be kept in mind that Charlotte has made no bones about its desire to depart for a conference with football. VCU has consistently been in the top 20 non-BCS teams and the top 50 overall, and they have a young, successful coach in Shaka Smart. If/when Charlotte leaves, the A-10 would be better served to add VCU and stay at 14 teams rather than to add a couple more George Washington-level squads (George Mason is not the answer here) and go to 16 teams. VCU would give the league 3 of the top 15 or so non-BCS teams; if the A-10 wants to expand, it should do so at the top or not at all.