This is the first of three senior profiles we will run during what we have whimsically dubbed Farewell Week. Andre Walker will be the focus of this essay. Big Kenny's turn will come on Wednesday, and Tu Holloway will have his curtain call here at Banners on Friday. All three seniors left an indelible mark on the program, and all three will be missed.

When Xavier commit Jalen Reynolds announced last summer that he was going to spend a year at prep school and reclassify to begin his collegiate career in the 2012-2013 season, it didn't initially seem like that big of a deal. Sure, the freshman would have been a nice piece to have in Xavier's puzzle, but the frontcourt looked pretty solidly stocked with Travis Taylor and Jeff Robinson ready to work the four and Justin Martin available to spread the floor in a four-out, one-in situation. When the scholarship slot for the year came open, Musketeers fans didn't know how important that position would be. They didn't know how much they would need Andre Walker.

The transfer trail is one that has been trod by some of the most successful Xavier teams in the past. Drew Lavender, CJ Anderson, Jamel McLean, and a host of others have come into the Xavier fold via transfer from other four-year schools, and most of those players met with great personal success after their respective years off. Andre Walker, by virtue of already possessing his four-year degree, was eligible to play immediately after transfer, thus filling the one-year scholarship hole left by Reynolds reclassification. Despite having spent only one year on campus, he did enough to earn his way into Musketeer lore.

Walker came billed as the ultimate glue guy: not superlative at any one thing, but capable of doing enough things pretty well that he could step in a fill needs at a host of positions. He had the height and savvy to guard the post, enough quickness to contain on the perimeter, the effort to clean the boards, and the ball-handling ability to advance possession from arc to arc without having the bench pleading with him to give the ball up.

After averaging four points and four boards in the warm-up section of Xavier's schedule, Walker came to life in the showdown against his former team at Vanderbilt. While he only scored 6 points on 3-11 shooting, he raked down 14 boards - including 4 on the offensive end - as Xavier clawed back from down 18 to tie the game in regulation and take home the victory in OT. Despite playing 40 minutes, Walker only had one turnover and one foul and while defending every position but the point.

It was really that willingness to do all the little things without demanding the ball that endeared Walker to Xavier fans in his brief tenure. Against UC in the Crosstown Shootout, he pulled down nine boards, had four assists, a block, and two steals... and only shot twice. While the rest of his teammates - who almost all had more experience with UC than he did - got the glamorous assignments, he quietly handled his business behind the scenes, allowing Xavier to run away with the game.

Walker often dominated a certain category of the box score. Unlike players who have one superlative skill that they exercise over and over, though, he could fill up a different column each night. On January 7th, he had 14 of Xavier's 41 rebounds against Fordham. A week later, he led the team in assists while going for 8/6/7 against St. Bonaventure. While he never led the team in scoring, Walker was a luxury in that department in that he could get his points without having to have plays run for him. These "garbage" buckets are like found money for a basketball team, and Walker was an ace at coming up with them.

It was his toughness that endeared Walker to Xavier fans the most. It was no secret that he was injury-prone at Vandy - his eligibility at Xavier was only possible because of the time he had missed due to injuries there. With the season in the balance against Notre Dame, however, Walker hung in there despite getting his bell rung in a collision with Jeff Robinson. Despite barely shooting over 50% from the line on the year, he stepped up to bag three FT in a row as Xavier fought its way back from ten down to come away with the win.

Despite obviously fighting through the effects of that injury, he was back in the lineup against Lehigh two days later. He was well under 100%, but he still fought his way to 5/5/2 with a block in only 20 minutes of playing time. He knew his team needed him against Baylor, and he put forth a game effort in putting up 0/4/2 with a steal and no TO in 17 minutes. Every time Walker retreated to the bench, he simply put a towel over his head and stared at his feet, trying to grab a few minutes of darkness and peace before rising to answer the bell again.

In the end, it wasn't to be, but nobody in his right mind could question that Walker had given all the he possibly could for the cause. And really, is there any stronger compliment that can be given to a player at the end of his career? Walker's measured and approachable personality made him a favorite of Coach Mack's daughter Lainee, who immortalized him in the below picture. His heart, effort, and willingness to do whatever the team needed him to do made him a favorite for those of us who cheer for Xavier. Andre Walker, you will be missed. 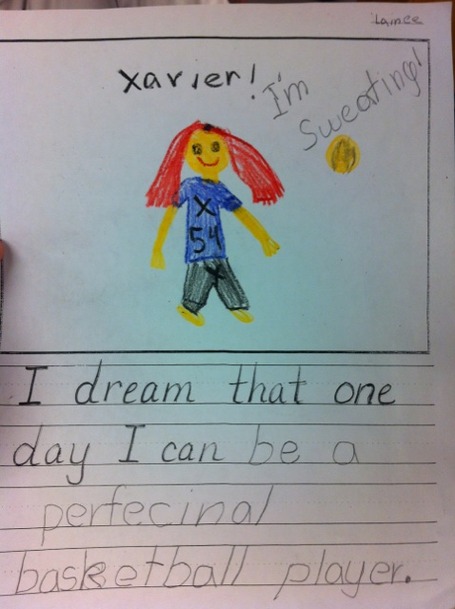