If I had told you Xavier was going to the Sweet Sixteen at the beginning of this year, you would have been happy about that, right? If you knew they were going to beat a #15 seed and a #7 seed, you would have assumed they were going to be a #2 seed, wouldn't you? Much like everything Xavier has done this season, it wasn't nearly as easy as you would have thought at the outset. Despite that - and despite everything else the Musketeers have gone through this season - Xavier is going to the Sweet Sixteen for the fourth time in five years.

Defense was once again the catalyst for the Xavier Musketeers tonight. It wasn't shaping up that way early, though. With four and a half minutes left in the first half, Xavier was looking out of sorts and trailing 31-16. Xavier outscored Lehigh 17-6 from that point on in the half, cutting the Mountain Hawks' lead to just four. Then, with the game tied at 52 with seven and a half minutes left, Xavier zipped Lehigh up for the final time. The Muskies closed the game on an 18-6 run to secure the lead and the Sweet Sixteen bid. In those pivotal twelve minutes at the end of each half, Xavier outscored the Mountain Hawks 35-12 and allowed just four made baskets. Allowing a point per minute without taking the air out of the ball speaks volumes about the work that Xavier did on the defense end during the stretches in which the game was there for the winning tonight.

Today's hero was the biggest man on the court, Xavier's senior center Kenny Frease. We noted in the preview that Xavier could anticipate a big game out of Big Kenny, but I don't think anyone saw the unstoppable wrecking crew that Frease would become during tonight's game. Only a lack of touches limited Frease in the middle, and his line of 25/13/0 with 2 blocks and only 2 turnovers on 11-13/0-0/3-5 shooting only begins to speak to the impact that he had on the game. His only two misses were a blocked shot that looked to consist of more skin than ball and a 15-foot jumper off a scramble situation. This was the Kenny Frease that Muskie fans wanted to see all season, and he could not have picked a better time to have a big game.

In a game in which Goliath carried the day for Xavier it seems only fitting that the smallest guy on the roster played the next biggest role in the game for X. While his stat line of 6/1/0 with 1 turnover is not exactly inspiring, Dee Davis was a huge reason Xavier had a chance to win the game today. He hit two massive threes in the first half when it looked like things could be slipping away for X, and he drew three charges in the game. Two of those were on CJ McCollum in the first half, which kept the Lehigh star rooted to the bench and contributed to his trouble ever finding a rhythm in the game. With Dez Wells off the court with a sprained toe or turf toe, depending on whom you ask, Xavier's other freshman stepped up and was absolutely massive in 29 minutes for the Muskies.

Of course, Tu Holloway was going to have a say before all was said and done. He bagged two big threes to help drag Xavier back into it at the end of the first half and then stayed in attack mode for most of the second. He also was tasked primarily with defending CJ McCollum and helped hold him to a 5-22/0-6/4-4 shooting performance. Holloway ended the night with 21/2/2 on 6-15/4-8/5-7 shooting. It wasn't the Xavier star's most efficient showing of the season, but he made the plays when his team needed them. For a player who shoots 34% behind the arc and shoots 3.7 of them per game, a 4-8 showing from deep is taking a huge step up in crunch time.

The bench was pretty non-existant for Xavier against Notre Dame, but the second unit came up big tonight. Counting Dee Davis' heroics as detailed above, the reserves played 70 minutes and went for 10/18/1 with a steal, 3 blocks, and only 3 turnovers on 3-12/2-5/4-4 shooting. I'll acknowledge that those shooting numbers could be a little bit better, but with Dez Wells hobbled and Andre Walker still looking a little woozy, Coach Mack was going to need to be able to call on someone to step up and make plays in the vacated minutes. Xavier's bench did just that on Sunday, and they're a big reason why the Musketeers are dancing into the second weekend once again. 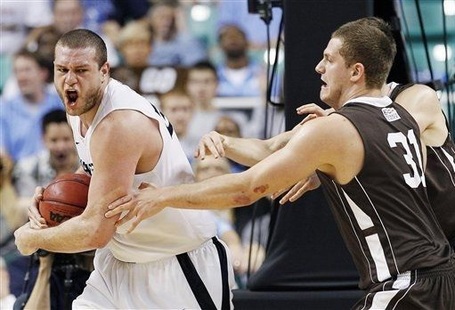 Odds and ends:
-Justin Martin reappeared for Xavier today and pulled down 7 boards in 13 minutes.

-Lehigh usually hits 77% of their free throws, but they were just 13-20 (65%) from the stripe on the game. Things might have played out differently had the Mountain Hawks executed from the stripe.

-Xavier held Lehigh to 14.7% shooting in the second half.

Dad's take:
(My dad is an old-school basketball guy and a die-hard X fan, and he and I text throughout the games from time to time. His opinions can be both insightful and entertaining, especially pulled from their context. Below is a sampling of his offerings tonight.)
-"Here we go."
-"Lyons needs to start playing; that dude ran right by him."
-"Rob, Taylor, and Davis at the same time. Not good."
-"Dez, say it ain't so!"
-"This is sad."
-"Tu needs to keep shooting; we have no other options."
-"What have they done with the real Big Kenny?"
-"DAVIS?"
-"Quite a run to end the half. Tu's last shot was trying to draw a foul, I think."

It's never easy with these Musketeers, but there's no point in wanting it any other way. Xavier will play at an as yet undetermined time on March 23. Come on back tomorrow morning for Brad's narrative recap, as always. The Sweet 16, a Xavier tradition.