Xavier wasn't supposed to be a ten seed this year; this wasn't supposed to be a season in which the Muskies needed a late run in early March to avoid the dreaded NIT. This was a team that brought back a talent back court and the A-10 biggest big man from a squad that had nearly run the table in the conference the year before. Injuries and redshirts had drained the depth from that squad; this year, an influx of talent from health, recruiting, and new eligibility was supposed furnish Coach Mack with an embarrassment of riches upon which he could call if a member of the starting five stumble or wore down. Things - as they often do - didn't go to plan.

In many ways, the same things that are said about Xavier hold true of this Notre Dame squad. The incident that derailed their high hopes for the season came in November, when star forward Tim Abromaitis - who had averaged 15 and 6 and buried 43% of his threes last year - blew out his knee and ended his senior season. Since then, this team has been as enigmatic as the Muskies. Are they the squad that beat Syracuse by nine to spark a nine-game winning streak that carried them from the end of January to the middle of February? Or are they the team that had losses to lowly Rutgers and St. John's bookend that run? Whatever they are, their hopes at the beginning of this year are long since forgotten, and all that is left is the same hope that every other team in the tournament has: if we can just survive and advance... if we can win looking good, bad, or ugly... if we can find that little bit of luck... anything can happen.

If there's one thing everyone knows about Notre Dame, it's that their offensive tempo is slow. Excruciatingly slow, one might even say. The Irish average 61 possessions per game, which is in the bottom 25 in the nation in terms of pace. Despite using just about the whole shot clock every time down, Notre Dame gets no better than average looks; in fact, their 3P% of 32.9% is well below the national average. The team only posts an EFG% of 49.2%, which is bang-on national average. They also barely grab rebounds on 30% of their own misses, which isn't good. As mentioned before, though, they simply never turn the ball over. They only have turnovers on 16% of their possessions as a team, which leads the nation.

Defensively, the Irish are very good at forcing bad shots. Opponents only shoot 31% from behind the arc and 45% from inside it; both of those numbers put the Irish in the top 75 in the country. They also force action away from the perimeter, allowing only 28% of opponents' shots to come from deep (35th in the country). Notre Dame doesn't force many turnovers on defense, doing so on only 17.4% of opponents' trips down the floor. While they are barely average at defensive rebounding, only three teams in the country are better at not sending opponents to the line. Just something to keep in the back of your mind for a little later on. 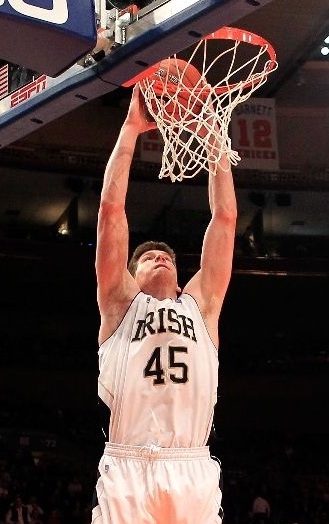 shooting. While he doesn't have the range of the departed member of the Irish, it's not hard to look at Cooley and wonder if he's not just Luke Harangody come around for a second shot at college. At 6'9", 244 with a decent mid-range game, Cooley is a big man in the mold of Brian Conklin and Matt Kavanaugh, except probably better. He's also a bear on the offensive boards, grabbing 17% of his team's misses when he's on the floor. If you've followed Xavier for more than about a week, you can see why Cooley is a potential problem for the Muskies. Just to prove he's not all about one end of the court, he also grabs 20% of opponents' missed shots and blocks almost two a game.

Just about everything you can say about Atkins goes the same for Jerian Grant, except for size. Grant is 6'5", 185, but is also a sophomore and also plays just short of 90% of the time the team is on the floor. Grant goes for a similar 12.3/2.8/4.9 line with 1.3 steals and 1.8 turnovers per game. Grant's assist rate is a little higher and his TO rate a little lower than Atkins', but Notre Dame gets remarkably similar production out of both of their young guards. Grant's shooting line is .383/.348/.819, and he leads the team in shots attempted, three-point shots made, three-point shots attempted, and free throws made. He's not shy (or terribly efficient), is what I'm saying.

Freshman Pat Connaughton took over starting duties at the three about halfway through the season and has settled in quite nicely. The 6'5" wing averages a respectable 6.9/4.5/0.8 on .418/.336/.757 shooting. He does more work as a shooter than a slasher, putting up nearly 60% of his shots from behind the arc and only getting to the line about once per game. He also represents something of a quandary for Notre Dame on the defensive end, as he most likely does not have the physical ability to stay in front of Dez Wells, Tu Holloway, or Mark Lyons off the dribble.

Bench:
In addition to being very young since the loss of Abromaitis, Notre Dame has one of the thinnest benches in the nation. The Irish only get 20% of their minutes from the reserves, which is 337th out of the 345 Division One basketball teams. Alex Dragicevich gets about 21 minutes per game, though that number is inflated by the fact that he started for ten games earlier in the year. He's a 6'6" sophomore forward who averages 6.8 points on .393/.348/.741. He might end up being of note if Brey decides to try to exploit Xavier's vulnerability to a perimeter-oriented four and calls on Dragicevich to be the man to do it.

Beyond him, Joey Brooks is 7-17 from three on the year and averages 2 boards in his 11.5 minutes per game. Nobody else gets more than ten minutes per contest for the Irish. As previously stated, the bench is not a strength for Notre Dame.

Three questions:
-Can Tu Holloway get to the line? Tu - it may come as no surprise to you - is often the catalyst of Xavier's offense with his ball distribution as well as his scoring. Of Holloway's 527 points this season, 201 came as the result of made free throws. When measured in terms of FTA per FGA, Holloway is 40th in the nation in being able to find his way to the free throw stripe. As we saw in last year's first-round washout against Marquette, however, Tu can get frustrated if his efforts to draw contact don't get the attention of the officials. Notre Dame is the fourth best team in the nation at avoiding giving up free throws to the opposition. If Holloway gets into the middle of Notre Dame's defense, he needs to be rewarded with free throws to keep Xavier's offense clicking.

-Can Big Kenny stay out of foul trouble and contain Jack Cooley? This has been an insanely up-and-down season for Xavier's senior center at both ends of the court. He has been victimized by a combination of foul trouble and poor play on the way to being torched by some of the most ground-bound centers in the Atlantic Ten, but he has also - and more recently - shown up and shut down opposing post players to help anchor the Xavier defense. Jack Cooley has the highest usage rate of anyone on Notre Dame, and he is also a manic on the boards on both ends. If Frease can avoid the cheap fouls that so often beset him and make Cooley work for everything he gets, it will be a serious boost to Xavier's chances.

-Does Notre Dame have anyone who can contain Dezmine Wells? Xavier's high-flying freshman forward has been everything he was advertised to be coming into the year, and he seems to be only getting better as the season goes on. He's an obvious menace in a full court situation, and he is a good enough shooter (39.6% from behind the arc) that opponents have to respect that as well as his ability to slash through the middle. He has 35 pounds of muscle on Jerian Grant and Pat Connaughton simply isn't athletic enough to be tasked with keeping Wells in check. Mike Brey's solution to the problem of containing Wells is going to be one of the pivotal factors of Friday's game.

Three keys:
-Open the pace. Interestingly, Notre Dame has shown the ability to lose at both a high and a low pace, averaging almost the exact same number of possessions in their wins as their losses. This is more about Xavier than the Irish, though. The Muskies thrive on baskets scored before the other team has had time to collect its defense, and the emotional boost that comes from a quick basket often manifests itself in better defensive effort for Xavier. The Irish don't have the horses to run with Lyons, Holloway, and Wells for an entire game. The more those three - and the rest of Xavier's squad - can get out and go, the better off Xavier is going to be.

-Come ready to play. From the very beginning of the season, Xavier has been a second-half oriented team. Huge comebacks against Purdue and Vanderbilt early, clawing back into games all season in conference, and turning the tide against Dayton and Saint Louis out of the locker room have been some of the instances in which Xavier's second-half has redeemed a wholly sub-par first twenty minutes. That simply can't happen against Notre Dame. There's too much on the line in the tournament to come out flat, and Notre Dame's grinding pace makes it difficult to score volumes of points in anything resembling a hurry. X doesn't have to bury the game in the first half, but they can't expect to make up a double-digit deficit after the interval, either.

-It starts with stops. Notre Dame is a relatively inefficient offensive team that masks that fact with low turnovers and a monotonous pace. They also are mediocre at best on the boards. The Irish defense, however, will get its share of empty possessions out of the Musketeers. That makes it all the more vital that Xavier have good defensive possessions against Notre Dame and finish those possessions off with a defensive rebound. An offensive board for the Irish is almost as certain to turn into another thirty seconds on defense for Xavier as it is a quick stick back. This is not a team that has the patience to defend over and over again; the Muskies have to wrap up Irish possessions and get out on offense as often as possible.

Bottom line:
Every regular season performance comes with it an analysis of how it is going to affect the team's chances of making or advancing in the tournament. The time for that is (obviously) over at this point. From here on out, it's all about winning, no matter how ugly it looks at the time. A game against Notre Dame is a perfect example of this, as the team wears winning ugly as almost a point of pride. If Xavier can get out to a lead and force Notre Dame to chase the game, the game is there for the taking for the Muskies. If the Irish are able to score and keep X from breaking out on offense, it's going to take a lot of late-game magic for the Musketeers to survive and advance. Either way, this is a very evenly-matched game promises to deliver a gut-churning two hours for fans on both sides.

All pictures courtesy of the Associated Press.