Just sixty minutes of basketball ago, there didn't seem to be a lot of hope left for the Xavier Musketeers this season. Down ten and reeling from a barrage of Dayton three-pointers, the Muskies were on the ropes. They've come back swinging, and the same fighting spirit embodied by the well-loved greats of old like BJ Raymond, Stanley Burrell, and Dante Jackson has led Xavier from the wrong side of the bubble to the brink of automatic qualification.

It would be disengenuous to pretend that it was a smooth climb from desperate to locked in, though. Saint Louis buried three three-point baskets in their first four trips down the floor to open up a 9-4 and again raise questions regarding Xavier's perimeter defense. The Billikens' stingy defense was also giving Xavier fits early on, holding Xavier scoreless from 16:25 to 11:02 while Saint Louis took a 15-8 lead. Tenacious defense from Xavier contributed to the inefficiency of Saint Louis' offense, but the game looked very much like it was being played between two teams who had left it all on the court less than 24 hours ago.

As Saint Louis continued to look like their legs were made of lead, Xavier slowly found a modest offensive rhythm. Kenny hit a couple of jumpers. Andre Walker split a pair of free throws, then got a layup. Cheeks got a layup, then Tu hit a couple of FTs. With no great fan fare, Xavier made the most subtle 11-minute, 21-8 run you're ever likely to see in a division-one basketball game. Despite nobody on the team scoring more than six points in the half and with no Musketeer other than Kenny Frease scoring consecutive buckets for the team, Xavier went into the half with a 29-23 lead in a leaden and slow-paced game.

Much like he did against Dayton - and perhaps with the cautionary example of Xavier's last second half against Saint Louis in the back of his mind - Tu Holloway came out of the locker room with a roar. He buried a catch-and-shoot three on the right wing on Xavier's first possession. After Kenny Frease split a pair of free throws, Holloway set himself and buried another three ball. After Rob Loe answered for Saint Louis, Holloway crossed over, stepped back, and buried his third three-pointer in as many attempts to open the second half, and Xavier's six-point lead swelled to fourteen. Holloway's line - 21/5/3 on 6-14/3-8/6-6 shooting - is eerily similar to the one he put up against Dayton, and the way he set the tone out of the half in both games also bears mention. Holloway is widely known as one of the game's best closers, but he has boosted Xavier in Atlantic City in the role of ace setup man.

The Billikens weren't interested in making it that easy for Xavier, however. After Holloway's third three, Xavier lost a little rhythm on offense and their opponent went on an 11-2 run capped by a Dwayne Evans three-point play wrapped around the under-12 media timeout to tighten things back up at 43-38. The teams battled back and forth from there; Mark Lyons answered with a quick three and a layup to take the lead back to ten. Saint Louis answered with seven points in 90 seconds to cut it back to three. 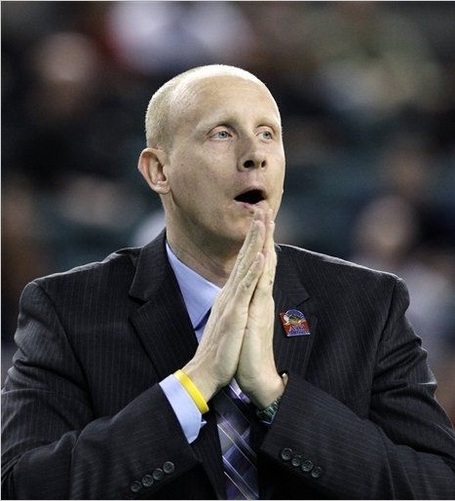 With the wheels threatening to fall off, Dezmine Wells stepped up and saved the day for Xavier. He answered two Brian Conklin free throws with a layup at the 8:43 mark when his pass towards Kenny Frease bounced off of a swarm of hands and fell back to him. Saint Louis took advantage of a Kenny Frease turnover to go on a quick 6-2 burst and slice the lead to three, but Wells once again victimized Jordair Jett off the bounce to get into the lane and finish. Brian Conklin hit a layup, but Well answered back with a difficult jumper. Conklin split a pair of free throws, and wells was there to knock down another short J when nobody on Saint Louis could elevate with him. Kwamain Mitchell missed a three, and Wells forced Jordair Jett to foul him on the way to the hole. After he converted both free throws, Wells had ripped off 10 points in four and a half minutes, answered every Saint Louis attempt to get back into the game, and stretched the Xavier lead back to eight at 60-52. Wells ended the game with 18/4/2 on 6-8/0-0/6-6 shooting, but it was his burst in the end stages of the game that will be scorched onto the corneas of horrified Billken fans.

No matter how many stakes to the heart Xavier delivered, though, Saint Louis refused to simply just die. They answered Wells' burst with a 6-0 run of their own to cut the lead to two and bring Xavier fans back to the edges of their seats. With the ball out of bounds in the corner and the shot clock showing five seconds, Xavier once again called upon Mark Lyons, and the King of Upstate answered the bell. Catching the ball in the right corner, he took three calm dribbles to his left and launched into a fading three-point attempt so ridiculously contrived that you couldn't help but cringe as the ball left his hand. It caught nothing but the bottom of the net on its way through. Lyons posted 14/6/1 on 5-9/2-3/2-2 shooting on the night, and it was his last bucket that was his best. From the point that ball fell through to the final buzzer, Xavier salted things away with a perfect 8-8 from the line and a clutch Kenny Frease offensive board of the team's only miss, a Tu Holloway three at the end of a shot clock.

One of the most heartening things about the way Xavier has won these two games has been the team-first play of the guards. Tu Holloway went on bursts after each halftime but was largely distributing the ball down the stretch. Mark Lyons has avoided the forced shots and over-optimistic drives that lead to empty possessions and been rewarded with the most important baskets of each game. Kenny Frease was spectacular against Dayton and steady against Saint Lou; only persistent double teams - and couple of questionable passing decisions - kept Frease from getting more than his 9 points on 3-6/0-0/3-4 today. Dez Wells, as noted above, stepped up for X today, and the whole team was more than happy to get him the ball while he had the hot hand. After scuffling through January and February and looking bad doing it, Xavier has suddenly found its stride. The Muskies have locked up a bid in the NCAA tournament at this point, and I promise you no five- or six-seed wants to see XU drawn opposite them this Selection Sunday.

Odds and ends:
-Xavier got four points out of 31 bench minutes, but the substitutes also only turned the ball over once. Call it a wash for the reserves, though the Muskies may need more out of them next weekend.

-Due in large part to that, Xavier outboarded Saint Louis 29-23 on the game.

-Kwamain Mitchell had nine assists; so did Xavier.

-Xavier once again clutched up from the line when it mattered, hitting 18-21 from the stripe in the game. Dez, Tu, and Cheeks combined to go 14-14.

There it is, sports fans. Brad plans to be back the preview tomorrow morning, provided he doesn't get called in to work. If he doesn't just know that stopping Nicholson is important. Xavier plays at 1pm on CBS for the Atlantic Ten's automatic bid. Thanks to daylight saving time, Xavier will be tipping off for the third time in 39 hours. See the training staff if you need hydration or an ice bath before the third game in three days.