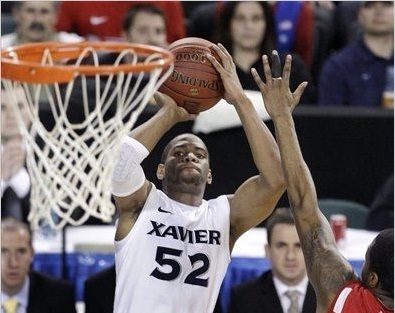 What a game, what a finish, what a second half. Xavier came out well, but a combination of the whistles and a slight defensive letdown had the Muskies staring down the barrel of a ten-point deficit at the half. After holding Dayton to 2-10 from behind the arc for the first 17 minutes, Xavier allowed the Flyers four clean looks at the basket from deep at the end of the half. Dayton jarred all four. A team with shooters can swing a game in a hurry, and UD did just that. Heading into the interval, Xavier's grasp on the season looked tenuous at best. If Twitter is an accurate representation, the citizens of Xavier Nation were already on their way to a very dark place. Only one thought could have provided solace for Muskie fans: we've got Tu.

With the game and the season fading away, Tu came out of the locker room looking to do damage. At 19:18, he wound through the Dayton defense, drew a foul, and completed the three-point play. Thirty-five seconds later, he left his man pawing at air with a back-to-front crossover before burying a three. After Paul Williams hit two free throws, Tu left his man at the top of the key with a series of quick crossovers, slid into the lane, and threaded a pass to Big Kenny for another three-point play. A ten-point halftime margin shrunk to just three, and a season on life support was suddenly alive and well in Atlantic City.

One of the stories of the first half that helped Dayton build that lead was Xavier's performance from the free throw line. In the first half, X shot just 6-16 from the stripe. Kenny Frease was the main culprit in that little disaster, to the point at which he was out on the floor shooting free throws during halftime. Though he missed all four of his attempts during the interval, he was a changed man after the break. Dayton's strategy on defense seemed to be to hack the snot out of him, and he responded by connecting on all eight of his free throw attempts in the second half. Coach Mack made much of the team's desire to target Frease on offense, and the big man from Massilon responded with 17/7/3 with a steal and two blocks on 4-7/0-0/9-14 shooting. Frease played 34 minutes tonight and spent every single one of them looking like a senior not ready for his career to end.

After Xavier came back and tied the game, the margin only once got over four points in either direction. Dayton made a 6-2 mini-run to take a 54-53 lead, but Jeff Robinson got a tip and a quick layup from a Kenny Frease pass to put X back on top by three. Josh Parker erased that with one shot. With the game coming down to the wire, Xavier went six straight trips down the floor without a made field goal and Dayton took a 69-63 lead with three minutes left. 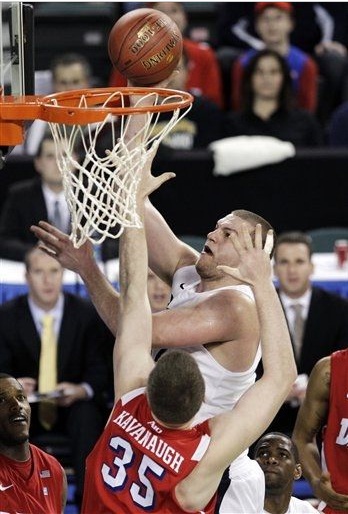 Two things have been constants for this Xavier team in the times that they've played well. One has been defensive intensity. Xavier's motto - you might have heard - is "Zip 'em up." That turn of phrase has more to do with choking the life out of another team's offense than it does with body bags, and X zipped Dayton up in the last four minutes tonight. The Flyers shot 0-5/0-3/2-2 and turned the ball over once with their own season in the balance, and the turnover came on a shot clock violation. When they needed stops the most, Xavier ratcheted up the defensive intensity to a level that UD couldn't handle.

The other constant for Xavier this season - in good times and bad - has been the irrepressible swagger of Mark Lyons. In the last 2:47 of the game, with his team starting that span down six, Lyons scored 7 points on 2-2/0-0/3-3 shooting, the final blow of which came on a bloodless slash through the heart of Dayton's defense for a tricky in-and-out-and-in layup to give Xavier the last lead it would need on the night. As Lyons returned to the huddle after that basket, his flexed biceps clearly declared him to be the King of Upstate. Dayton didn't have anyone who could dispute his claim to the throne.

The drama didn't end there, of course. Anyone who watched or listened to the game knows what happened next. First Matt Kavanaugh missed a bunny with a chance to give his team the lead. The ensuing rebound caromed out of bounds, and possession was awarded to Dayton. After the teams traded timeouts, Dayton chose to have Kevin Dillard trigger the ball in. Chris Johnson caught nothing but fresh New Jersey air on his shot attempt, Kenny and Dez and ultimately Tu kept the rebound away from the Flyers, and the Xavier tradition of sending Dayton to the NIT was alive and well for another year.

Numbers don't do justice to the performance Holloway had tonight. Only he and Kenny Frease looked alive in the first half, and Kenny's 1-6 mark from the free throw line hamstrung his effectiveness. Holloway kept his team alive with 10 first-half points and then ignited the 17-7 run that ultimately culminated with his three-point basket tying the game at 45. His line was very good - 21/5/2 with 2 steals on 8-16/2-5/3-4 - but what he meant to his team tonight was so much more than that. When you absolutely have to have a win - as both of these teams did tonight - it helps if the best player on the floor is wearing your colors. Tonight, Tu Holloway was everything Xavier needed him to be. When he cupped the ball and skipped gleefully into the crowd as the final buzzer sounded, you could tell he knew it.

-Cheeks was 2-6 from the floor before taking the game over in the last three minutes.

-Lyons led the team with 5 assists; Big Kenny was second with 3.

-Xavier only turned the ball over 8 times tonight.

Dad's take:
(My dad is an old-school basketball guy and a die-hard X fan, and he and I text throughout the games from time to time. His opinions can be both insightful and entertaining, especially pulled from their context. Below is a sampling of his offerings tonight.)
-"A moment of silence, please. Today is the anniversary of Biggie's death."
-"BK better come to play because Dayton will be chucking threes."
-"I have to watch the UD feed."
-"657-1. Got it, thanks." Thanks to all our Twitter people for an assist on this one.
-"Rims sound stiff; even Tu missed a free throw."
-"Walk has 2 airballs. Maybe he should pass."
-"Raining threes. Looks all too familiar. Come on."
-"Need to post Kenny; he keeps farting around 25' from the basket."
-"Not good - Davis limping, Lyons with two fouls, and Redford is white."
-"Got to keep it close until the half; we're a second half club."
-"4/11 FT. Pathetic."
-"Play BK until he drops. Taylor/Martin/Walk more sorry than usual tonight."
-"Because of fouls, we are forced to give extra minutes to guys who can't handle the role."

That's it for about 15 hours, Xavier fans. Brad will preview Saint Lou tomorrow at nine, and the tip is slated for 3:30pm. We've got you covered from the starting lineups to the final horn. What a game that was tonight. Get plenty of fluids and come back ready to do it again tomorrow.