There was no way for this game to mean anything in regards to Xavier's chances in March would be for Xavier to somehow contrive to lose. Thankfully, they managed to avoid that rather comprehensively. Before Coach Mack took the starters off the floor, Xavier was holding a 19-point lead and controlling the game against a vastly over-matched Rhode Island Rams squad. Despite the span of the final score, this was not a comprehensive performance for the Musketeers. At any rate, a win was what X needed to get out of this game, and that's exactly what they ended up with.

The story of the box score was the line put forward by senior guard Tu Holloway. Tu had 20/10/6 on a brilliant 6-8/0-1/8-8 shooting line. The only blemish in Holloway's otherwise sterling performance was his six turnovers. Holloway seemed more concerned with moving the ball than scoring it himself, as noted by the fact that he only needed 8 shots to get his 20 points. The triple-double watch was on briefly, but he didn't connect on enough passes to get it done. Six turnovers isn't going to get the job done going forward for Xavier, but Holloway's willingness to get the ball out of his hands after his 3-12 shooting performance against Memphis is a good sign going forward.

Mark Lyons is still struggling to find his footing coming off the bench. He got starters' minutes at the two, spending 27 minutes on the floor as compared to starter Brad Redford's 16, but never found a shooting rhythm. He ended up with 10/3/5 on 3-9/1-2/3-4 shooting. His assists came with only two turnovers and two turnovers. Everything except his 2-7 mark from inside the arc was actually pretty good for Cheeks. Being that inefficient from two-point range can take the shine off of an otherwise pretty good line, which is what it did for Lyons today.

Big Kenny was not a featured part of the offense tonight, but he was efficient with the basketball in his opportunities. He went for 8/9/2 on 3-6/0-0/2-2 shooting, blocked a shot, and only turned the ball over once. More athletic forwards Andre Walker and Travis Taylor combined for 21/8/3 on 8-12/0-0/5-7 shooting with two turnovers, two blocks, and a steal. Xavier dominated the paint to the tune of 50 points in that area to 22 points in the paint for Rhode Island, and that margin goes down in large parts to the efforts of Frease, Taylor, and Walker.

The game was so imbalanced that Griffin McKenzie and the walk-ons were able to get into the game and contribute. McKenzie had a dunk and a block, but O'Neil Cooper was the man. He put up 3 points on 1-1/0-0/1-2 and also had two steals. Landon Amos showed the blocking ability that he sorely lacked in his run-in with Yancy Gates by swatting away Blake Vedder's dunk attempt. Greg Dougan also avoided the dreaded trillion by grabbing a defensive rebound. Ultimately, Xavier needed to open up a can on URI today, and they more or less did. 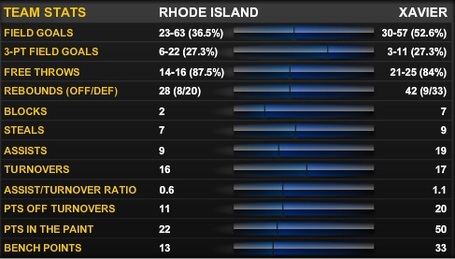 Odds and ends:
-You can see in the CBS breakdown above that turnovers were an ugly mark on the game for the Muskies. Giving up 17 possessions to a better opponent will torpedo a team.

-Rhode Island is an elite offensive rebounding team, but Xavier held them to 8 boards on 40 misses. That's about half the rate at which they get offensive boards.

-Coach Mack said in the post game comments that the team missed 14 shots within five feet of the basket in the first half; the less said about that the better.

-Having 19 assists on 30 made buckets is a pretty good mark for the Musketeers.

-Xavier had 24 fast break points tonight, which is a product of URI sending three or four guys to the offensive glass with every shot.

Dad's take:
-Dad was on the road tonight and wasn't able to watch the game. Try to keep yourselves together until Saturday.

As always, stay tuned for the narrative recap from Brad. Xavier will be back in action in a massive game at Temple on Saturday.