Dezmine Wells had the game of his young Xavier career, feasting on the open-court nature of the game (much as we predicted). He put up 19/5/4 on 8-10/0-1/3-3 shooting and was generally the Musketeer that Memphis had the most trouble staying in front of. Playing for 33 minutes in a high-leverage road game is a big ask of a freshman, but Wells came up huge for the Muskies today. He also limited his turnovers to two and played pretty good defense. It's of little consolation right now, but Xavier obviously has something special on their hands with Dezmine Wells.

Having Kenny Frease show up was always going to be a big part of the game for Xavier today. Defensively, he was the only player Xavier had who could make basketball look difficult for Tarik Black. Black ended up with 13 and 9 on 4-6/0-0/5-6, but most of that came when Frease was on the bench and someone skinny was tasked with guarding Black. Meanwhile, Kenny stayed out of foul trouble, played 31 minutes, and put up 10/10/1 with only one turnover on 5-10/0-1/0-2. Frease's performance from the line is still a concern, but he was the interior presence Xavier needed today.

When it came down to the pivotal moments of the game, however, neither Wells nor Frease was the one getting the basketball. Too much of the time, Holloway was keeping the ball in his hands. Though he ended up with 12/2/7 and only 1 turnover, it took him 3-12/2-5/4-4 shooting to get there. As the clock wound down through the last five minutes, ball movement diminished, Frease stopped getting any real touches in the middle, and Memphis was able to lock down the Xavier offense. It's not the first time we've seen this, as Muskie fans; the ball simply stops going inside as the game gets tighter down the stretch. That has to be remedied. With Xavier down 3 with 35 seconds left, Tu forced a fadeaway 15-footer that caught nothing but hardwood. With the most important game of the season on the line, Xavier's point guard's decision making doomed the team to defeat.

It's not all lost for Xavier. Realistically, though, it's a long road back for Xavier. Xavier will get healthy against URI at home on Wednesday. Away games against Temple and UMass will then bracket a home date with Dayton. After that, the season will wind down with Richmond at home, an away game against Saint Louis, and a home date against Charlotte. Losing more than one of those will put Xavier in a position in which they will have to win the Atlantic Ten tournament. Today's game started brightly but ended in a gut-punch loss. It's beginning to look more and more likely that we'll be saying the same thing about this season when it's all said and done. 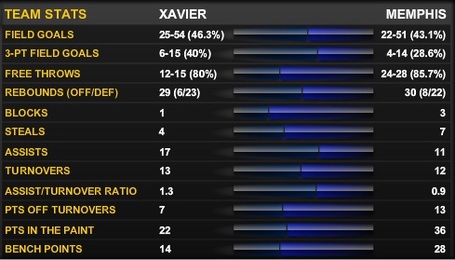 Odds and ends:
-What a gutting loss. Look at the CBS chart above for statistical details.

-Remember Jeff Robinson? He played seven minutes and didn't even shoot, grabbing three boards and turning it over twice. After five straight good games, it look like he's gone back to where he came from.

Dad's take:
(My dad is an old-school basketball guy and a die-hard X fan, and he and I text throughout the games from time to time. His opinions can be both insightful and entertaining, especially pulled from their context. Below is a sampling of his offerings tonight.)
-"Red money from deep."
-"Where is Martin? He and McKenzie sight seeing?"
-"Zone? might work if we box out."
-"Oh good, Kenny at the line. Can he fake an injury?"
-"Walk to Red, money. Someone box out!"
-"Dez is really playing."
-"Sad."
-"Six minutes with no baskets."
-"Their last six points are on layups."
-"Abandoned the inside. Left the biggest guy on the edge setting worthless picks."
-"Total and utter collapse. See you in the NIT... maybe."
-"No direction. Blew an eleven point lead with five to go."

That's it, sports fans. Brad will be back with the narrative recap, so stay tuned. Xavier is back in action when they host the Rhode Island Rams on Wednesday, February 8.