What happened: Saint Louis 70 - Xavier 59
Unreal. There is nothing good to say about that second half performance by Xavier. The Muskies spent the first 20 minutes of the game looking like a low-seed team that nobody on that 5-7 line wants to draw in the first round. From there, it all went off the rails for the Musketeers. There's no point in assigning blame to any particular entity; in a bed-crapping like that, there's plenty of shame to go around. You have to look at the benches when a team melts down like that after the half, though. Rick Majerus did something at the half that Coach Mack was apparently entirely unprepared for. The game slipped from up 11 to down 11 in the blink of an eye for Xavier. When Kenny Frease scored four quick points to cut the gap to 7, Mack lost his composure after a bad call and gave up a technical foul. Saint Lou made all four of the ensuing free throws, and the game and the season were dead and buried.

After being 2-6 from the floor at the half, Brian Conklin went 5-9 in the second half to end the game having eviscerated Xavier to the tune of 23/6/2 on 7-14/0-0/9-10. That's a microcosm of what went wrong tonight for Xavier. After doing everything right in the first half, X did nothing right in the second. Saint Louis went on a 24-3 run to begin the second half and Xavier simply didn't have any answers. A chance to add a signature win was well within Xavier's grasp after 20 minutes; instead, the Musketeers simply summed up their entire season with one 20-minute stretch.

I'm going to try to compose myself for a moment before writing the rest of this.
Okay, there were some good moments. Despite being limited to 18 minutes by some dodgy officiating. Kenny Frease got 10/6/1 on 5-8/0-0/0-1 shooting. Just as importantly, the big man never turned the ball over. He also chipped in a block. Frease left the first half for good with almost 12 minutes to play, which kept him from getting too much done in that period. As Saint Louis was making the big run to take over the game, however, Frease was an afterthought on the offense. Feeding the post makes opponents work on defense, gets high percentage shots, draws fouls, and slows momentum. Instead, Xavier was content to take jumpers early in the shot clock, often before any meaningful ball reversal occured. Big Kenny takes plenty of garbage from the Xavier faithful, but he was not the problem tonight.

Dez Wells also came to play tonight. In the first half, Xavier went small because of foul trouble to the bigs, and Wells thrived to the tune of 12/6/1 on 5-7/2-2/0-0 shooting. He disappeared in the second half, however, as Saint Louis took over, and he shot 0-2/0-0/1-2 in the second stanza to end up with 13/10/1 on the night. Wells can hardly be blamed in a sense; he thrives on the full court game that allows him to score, and that didn't happen in the second half. Xavier uses defensive stops to begin the transition game, and they didn't get nearly enough of them in the second period.

Saint Louis shot 12-17/4-9/13-15 and beat Xavier 19-14 on the boards in the second half after going into the break at 10-30/2-12/7-9 and down 21-11 on the glass. They also forced seven turnovers while only committing three of their own. Meanwhile, they ratched up the pressure on Xavier, forcing X into 7-25/1-6/5-9 after the break. That's just awful. The Musketeers absolutely needed to be able to get something going in the second half, and they had nowhere to turn. Big Kenny was 4-6 shooting in the second half; the rest of the team was 3-19. Consider also that Kenny's first shot in the second half came with 18:06 to play and his second one was at the 9:18 mark. In the time between those shots, Saint Louis went on a 22-2 run. Xavier's senior big man showed up for the team today, but they didn't recognize it until it was too late.

I could go on for another dozen paragraphs, but I think I'll just jump to the odds and ends. 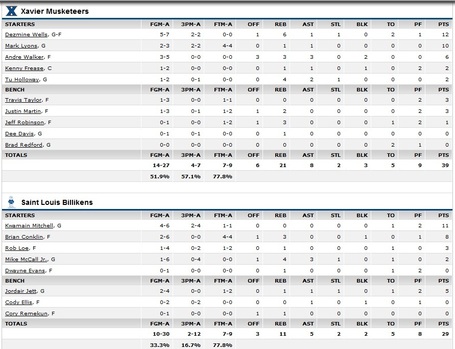 Odds and ends:
-I posted the first half box score above (click to enlarge); it helps to remember the good times.

-I know Brad Redford had a couple of bad TO early on, but where was he when X needed the 3 late? Coach Mack seems to love burying him at the time when his one elite skill is needed the most. Dee Davis took a 3 with less than two minutes left.

-I haven't scanned the bubble tonight, but I'm pretty sure it's win the A-10 Tournament or play in the NIT for Xavier.


Dad's take:
(My dad is an old-school basketball guy and a die-hard X fan, and he and I text throughout the games from time to time. His opinions can be both insightful and entertaining, especially pulled from their context. Below is a sampling of his offerings tonight.)
-"Don't bring that in Kenny's house!"
-"Cheap foul."
-"Walk is involved on O. Got to keep it up."
-"Come on, Red."
-"You can't put Rob in or ask Taylor to shoot jumpers."
-"K with a jumper... money."
-After Kenny's second: "Not good; we have no size.
-"Wells coast to coast!"
-"Whistle is gonna hurt us."
-"Stay in the zone."
-"Junior high call. Wells was in the air and had no chance to land!"
-"We are hurrying our shots."
-"Slow down."
-"Sllooooowwwwwww doooowwwwnnnnn."
-"Rob, what a moron! He jumped and tried to block the heave."
-"Skip halftime, just keep playing. Pretty solid 20 minutes."
-"Here we go again. Too many TO!"
-"Season's on the line here. Do they know that?"
-"We are done. No adjustment at the half."
-"Conklin is killing us."
-"Walk has to shoot it the paint; they won't move if he doesn't."
-"Where is our senior leadership? I miss Dante."
-After Mack's tech: "You can't lead if you can't control yourself."
-"Melt down."
-"I'm gonna go iron my clothes for tomorrow."
-"We were really outcoached. R M made adjustments, Mack didn't."

That's that. With a season-salvaging win there for the taking, Xavier completely melted down. When I last contacted Brad, he was somewhere between irate and despondent. Ever the consummate professional, however, I feel confident that he'll have his narrative recap up tomorrow. Xavier plays next at Cintas versus Charlotte on Saturday.