Holy cow. There was a lot of game played in Cincinnati tonight, but it would be disingenuous to begin the story with anything but Tu Holloway. A little over a week ago, ESPN.com ran a profile on Tu in which he talked about the fallout of the brawl and the media's reaction to his comments after the Cincinnati game. The most difficult passage of the whole piece was when Tu talked about how he just wasn't having fun anymore because of the added scrutiny he has been under. I don't know if Tu had fun tonight, but he was sure fun to watch. Holloway poured in 32/6/5 with two steals on 8-16/2-3/14-15 shooting. Equally impressively, Holloway never left the court, playing every second of the overtime game. Holloway's pirouette into a huge three in OT and his bloodless free throw shooting down the stretch ensured at least one more year of Jimmy Carter jokes for the Xavier student section. Coach Mack was pretty hard on his veteran players after the Temple game; he could not have asked for more from Holloway tonight.

Only Holloway's heroic performance on the night kept Mark Lyons from grabbing headlines - both good and bad - in his return to the starting lineup. He started off with great intensity, but his tendency to be himself earned him a technical foul in the fairly early going of the game. Despite having two fouls, he managed to be effective in short stints on the floor without getting his third before the half. His final line of 20/3/1 with two steals came on a 8-13/2-6/2-5 shooting line that was only marred by a poor showing from the free throw line. Xavier needs its New York back court to be humming if the team wants to make a serious showing this March; 52 points on 29 field goal attempts is a darn good start to that.

Andre Walker carried a different kind of load for Xavier, playing 40 minutes in the game. He was not by any regard flashy or the focal point of the offense, but he came off the court with 7/8/1 and a massive blocked shot in overtime on a shot that would have brought Dayton to within two with as many minutes remaining. In a game in which Kenny Frease struggled with foul trouble and ineffectiveness, Xavier needed someone to stabilize the paint. Once again, the former Vanderbilt man answered the bell for the Muskies.

Dezmine Wells also merits mention here for his 12/5/0 on 6-9/0-0/0-0 shooting. Three of Wells' rebounds came on the offensive end, as he used his elite athletic ability to get into the middle and create havoc. When the tempo of the game increases, Wells is a nightmare to try to defend, as he demonstrated during a Xavier burst in the second half. Aside from Wells, Xavier's forwards (including Big Kenny at center) shot 5-15 from the floor, which is not good. As Byron Larkin noted, that's why Xavier's guards are hesitant to lay the ball off when a defender steps up. Xavier has to get better on bunnies and from the line (12-22 aside from Tu's 14-15 showing), but at least the effort was there tonight.

There were a couple of other phases of the game in which Xavier still struggled tonight. They allowed Dayton to shoot 31 threes, many of which were fairly uncontested. Dayton "only" made 10 threes, but the night could have ended in tears for the Muskies if Dayton had been a little more locked in from distance. Xavier's defensive rotations were still too slow tonight. Xavier also got beaten 40-38 on the glass, which - as we noted in the preview - is about as well as the Muskies could expect against a good rebounding team like Dayton. Giving up 15 offensive boards is not an encouraging sign by any means though. Kenny Frease was limited to 12 minutes due to foul trouble, and Coach Mack rued his absence at points during the game. 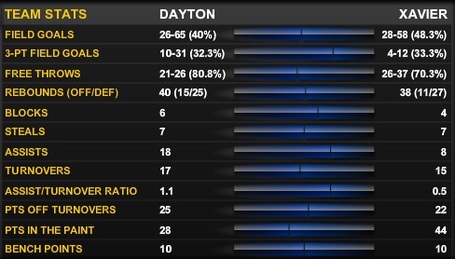 Odds and ends:
-As you can see from the CBS game chart above, Xavier ended with 15 turnovers. Considering they had 9 in the first half, that number is a lot better than it could have been.

-Coach Mack said after the game that one of the team's goals was to "attack the box." I think 44 points in the paint qualifies.

-Brad Redford's 0-2 from deep drops him down to 50% from beyond the arc in the calendar year.

-Jeff Robinson dropped two easy passes and an offensive board that would have all led to uncontested dunk attempts. That guy...

-Matt Kavanaugh feasted on Xavier's lighter interior players for 11 boards, including 6 on the offensive end. He still lost.

Dad's take:
(My dad is an old-school basketball guy and a die-hard X fan, and he and I text throughout the games from time to time. His opinions can be both insightful and entertaining, especially pulled from their context. Below is a sampling of his offerings tonight.)
-"Nice scoop by Wells. Needs to keep it up."
-"Glad Tu is going early. Lyons won't give up the ball."
-"Jen hedges and ends up fouling a guard."
-"Jen starts a UD rally."
-"Taylor should not dribble ever."
-"Coming unglued; gave that whole lead back."
-"This is depressing. Wells needs to get going."
-"Tu is playin'!"
-"Nice, Rob. Lookin' good."
-"Eight good minutes out of twenty."
-"Wells has moments of monsterness!!!"
-"Walker is just consistent. Nothing flashy."
-"No, Dez. Get up!"
-"Wells needs to get back in. On one leg he's better than most."
-"Kenny's shot just hit the shot clock. Followed by a butthead foul."
-"This reminds me of Memphis, and that's not good."
-"Five points and seven feet tall."
-End of regulation: "Can't even let them smell a three. Lots ofD. Do not foul a jump shooter."
-"Nice hands, Rob. Why pass to him? Ever?"
-"Burned again on the hedge. Please stop it."
-UD's last possession: "Foul before they cross mid-court."
-"Great night: X beats UD and OSU loses!"

That's it from me, sports fans. What a game. Brad will be back tomorrow with the narrative recap. Xavier plays again at UMass at 7pm Tuesday.