Well, thank God for Tu Holloway. In a game in which few - if any - of his teammates could have been described as "showing up," Xavier's best and gutsiest player once again carried the mail for the Musketeers. In other words, it was just like last year. Obviously, that's not good. In the last five minutes, no Muskie other than Holloway hit a field goal. The only other point Xavier got was a Kenny Frease free throw. Tu ended the night with 21/6/7 on 7-14/3-5/4-6 shooting and only three turnovers. It was Holloway's pivoting, spinning, double-clutching eight-footer in the lane that put Xavier ahead for good with 30 seconds left. Right now, it's hard to feel good about anyone on the team other than Tu when it comes time to score.

I mentioned in the preview that Nemanja Mikic "has the same kind of flexible four-man skills that have been gutting Xavier lately" and that "Mikic could be the key to this game for George Washington." I'm not patting myself on the back here; any goofball who has followed Xavier even casually this year - or has looked through the last several Muskie box scores - knows that there was a chance that Mikic could show up and go bananas. He put up 19/2/0 on 7-13/5-8/0-0 shooting. It didn't end up costing Xavier the game, but opponents have clearly seen something they can exploit in Xavier's defense. Until X gets that shored up, look for more of the same.

Big Kenny was the only other Musketeer in double figures tonight. He put up 10/6/1 on 4-8/0-0/2-5 shooting and turned the ball over 3 times. Byron and Joe both had good things to say about Kenny's positioning and effort, but Coach Mack noted in his post-game comments that it took Kenny too long to warm into the game. Despite that, Kenny gave the team an inside presence that it needed in a game in which literally every basket was the difference between victory and defeat. Frease was limited to 23 minutes by foul trouble, but he left a mark on the game when he was in there.

Free throw shooting was once again a source of embarassment for Xavier and its fans. The team as a whole was 10-20 from the line; removing Tu's 4-6 leaves them at 6-14, or 42.9%. The team came in shooting 54% from the line when you remove Lyons' and Holloway's contributions. Missed free throws will hamper an otherwise talented team; just as John Calipari about his (ultimately vacated) trip to the national final with Memphis. Xavier does not have that talent level, but they will still come up short of their potential if they can't convert from the stripe. The five to seven points they left on the line tonight certainly nearly cost them this game. 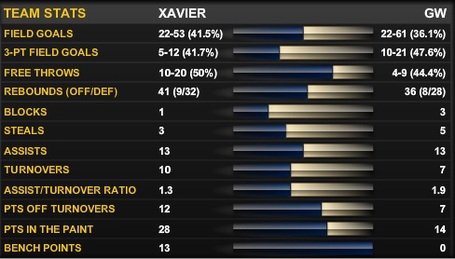 Odds and ends:
-You can see from the CBS stat breakdown above that Xavier more or less outplayed George Washington but gave almost all of it back by ineffectual defense of the three-point arc. That's becoming a trend for a team that was once borderline dominant in that department.

-Lasan Kromah somehow contrived to grab 13 boards. I'm not sure exactly how that came to pass, but I'm guessing Big Kenny's being limited to 23 minutes and Brad Redford spending 19 minutes on the floor limited Xavier's rebounding prowess.

-The Muskies had 13 assists on 22 baskets tonight. With Tu being the only one who really showed up as a go-to scorer, that ratio is not that surprising.

-Xavier only committed 10 turnovers, but they only forced 7.

Dad's take:
(My dad is an old-school basketball guy and a die-hard X fan, and he and I text throughout the games from time to time. His opinions can be both insightful and entertaining, especially pulled from their context. Below is a sampling of his offerings tonight.)
-Thirty minutes before tip-off: "Will take an act of God to beat Memphis."
-"We are bad early. They have seen something and are draining thrres."
-"Pathetic defense. It's raining threes."
-"Red corner, money!"
-"Red from the top for two... money again!"
-"Jen finally scores. They're stopping the game to give him the ball."
-"9-0 run by X. Led by that monster Kenny and Tu with a three."
-"Lyons out of control again."
-"Rob just got left on D. He looks clueless."
-"Mikic has 13! Who is he?"
-"Start of the second half. At least Red is in."
-"Red for three... money!"
-"Our coaching: it is bad."
-"Davis should only shoot layups. His jumper is broke."
-"McKenzie must drive the bus. I can think of no other reason why he is there."
-"This is sad to watch. We should be zipping these guys up."
-"9-18 FT. Pathetic."
-"Wow, they stink. Gave up three shots in two seconds. The only thing that saved them is that GW is really bad."
-"Good news: Dayton is going down at home to the Dukes!"
-Postgame: "They should just set triple screens for Red."

That's it, sports fans. Be sure to stay tuned for the narrative recap from Brad tomorrow. Xavier will be back in action at Memphis this Saturday at 1pm. We've got you covered from preview to autopsy; we're nothing if not perfecinal. Cue the cute picture! 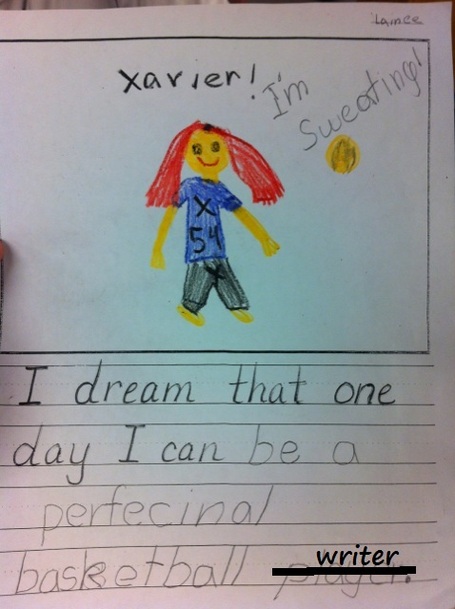