They say no news is good news, but that's often not the case. When General Custer did not receive a response to his dispatches requesting aid from Major Marcus Reno at the Battle of Little Bighorn, for instance, he likely didn't receive that silence as positive. Likewise, if Neil Armstrong had never gotten back in touch with his home planet as he stepped onto the moon, our edifices in his memory would likely read with a more somber tone. How did a week without any "news" in the form of game results serve X in the polls? 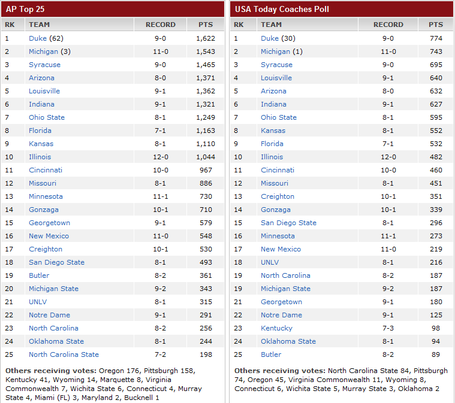 About how you would expect, really, which is not good. Xavier's undefeated week was not enough to distract the voters from the fact that Xavier also didn't win any games on the week. X took the backdoor route to a win over a ranked team, however, with Butler leaping into the Top 25.

Butler's leap into the rankings provides some home for Muskie fans. The Bulldogs sprung from 5 to 361 votes in the AP Poll and from 4 to 89 votes in the USA Today Coaches' Poll. All it took to get there was a win over a ranked team on a neutral court. In less than 48 hours from this writing, Xavier will be afforded to duplicate that trick.

Whelan's status: Still using just a spoon, but glancing wistfully at his fork.