Our national weekend of gratitude began somewhat inauspiciously for our Jesuit friends. A loss to Pacific will likely be a black mark on the Musketeers' potential tournament resume long after it is the only blemish on Xavier's record (SPOILER ALERT: I think X will lose at least one more game this season). The wins against moderately-rated Drexel and not-rated-at-all Drake pushed the team to 2-1 on the weekend and 5-1 the season, but was it enough to get Tim Whelan into the dentist's chair? 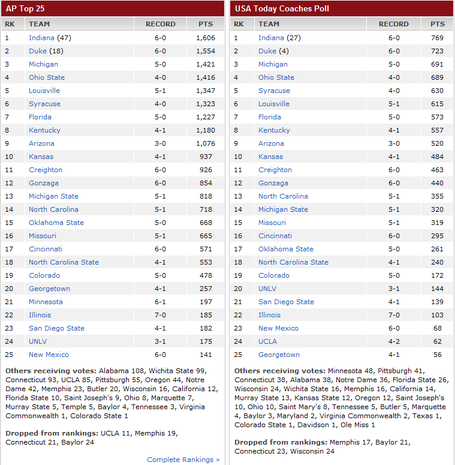 Well, no. As those of you blessed with good eyesight and/or an above average ophthalmologist have already noticed, Xavier now shows up nowhere in the polls. They are not even receiving votes in either poll. This, obviously, is a step in the wrong direction for our boys.

Fortunately for Xavier, the team's only game this week comes against Purdue. While the Boilermakers aren't ranked, they will provide a chance for Xavier to pick up a road win against a team whose name the voters will recognize. Fortunately for Whelan, he still has 31 healthy teeth to tide him over.