Xavier badly needed a win tonight against Charlotte to avoid sliding into a full-blown disaster mode, and they got just that. There were still plenty of things to point to as far as potential improvements can go for the Musketeers, but one might be willing to point out that the result and the performance are better than Xavier got at Charlotte last year. The updated conference standings show Xavier sitting a half a game behind UMass, LaSalle, and St Bonaventure for the conference lead. I have no explanation for that at all.

Once again, the story of the game was an opposing forward having what amounted to a career game against the Xavier game. This time, rather than Brian Conklin or Matt Kavanaugh going to work down low, it was Javarris Barnett going nuts from deep. He ended the game with 27/2/1 on 9-15/7-8/2-3 shooting. It's hard to make too much of this, though; it was more of a one-off performance than the continuation of a trend. Barnett kept getting guarded, so he kept moving back. The last three he hit was easily 25 feet from the bucket when he released it.

Good Kenny showed back up for the Musketeers tonight. After scoring 9 points on 3-11 shooting over 34 minutes in his last two games, Frease went for 12/4/1 on 5-8/0-0/2-2 shooting. Kenny scored on a feed from Brad Redford with 15:35 left; the next trip down the floor, he was fed and converted on two free throws. Disturbingly, he saw almost none of the ball from that point forward. Predictably, Xavier's offense got less efficient and things stagnated and tougher shots were taken. I know Tu and Cheeks are Xavier's most dependable scorers, but you've gotta feed the beast when he's eating that well. All in all, it was good to see a powerful performance from Kenny tonight.

Jeff Robinson got a start that he - in conjunction with some poor efforts from Walker and Taylor lately - had frankly earned. Sadly, he was back to being his old self after five straight high-scoring games. Robinson finished with 2/2/0 on 1-2/0-0/0-0 in 16 anonymous minutes. He did manage to pick up four fouls in that time, which may explain some of his struggles.

With the newest member of the starting five struggling, Xavier's bench was very good tonight. I'm not going to pretend this means that the team is now as deep as we thought they should be, but it was nice to be able to see Coach Mack rotating several players onto the court with little loss of productivity. Andre Walker went for 4/6/2 on 2-4/0-0/0-0 shooting, while Travis Taylor had 8/3/1 on 3-4/0-0/2-4 and showed flashes of his vaunted ability as an athletic big by beating Charlotte's entire team down the floor on a handful of occasions. Brad Redford was 3-5 from deep and picked up an assist.

Tu and Cheeks were not very good in terms of scoring today. They combined for 24 points on 8-26/1-7/7-10 shooting on the night. They did a great job of taking care of the ball though, combining for 12 assists and 5 steals against only 3 turnovers. As noted above, they could have down with feeding the post more and looking for their own shots less down the stretch, but their ball distribution on the game as a whole was just what the doctor ordered for Xavier.

Dez Wells did well in his home state, going for 12/7/1 with only one turnover to break out of his recent slump. Athletic ability is a huge part of Wells' game, and packed half-court defenses had been frustrating him in conference play. He was able to use his athleticism to get to the glass and create shots for himself today, finishing with a 6-8/0-2/0-0 shooting line. He had huge stick backs in back-to-back possessions for the Muskies with under five minutes left to help salt away a big road win for Xavier. 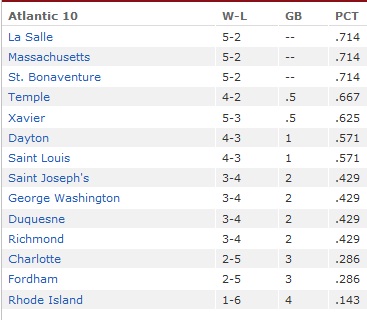 Odds and ends:
-I've eschewed the usual game breakdown for the up to the minute conference standings you see above. St Bonaventure was ranked 4th in the preseason conference polls, while Massachusetts was 12th and LaSalle 13th. Clearly, the Atlantic 10 is still up for grabs and Xavier is still in the hunt.

-Xavier was able to convert 14 Charlotte turnovers and an even offensive rebounding margin into 9 more field goal attempts than the 49ers got.

-Charlotte came into the game shooting 65.1% from the line, but they were 20-23 (87%) today. On the heels of Saint Louis' bloodless execution at the line at Cintas, this begs the question: Can a team be bad at defending free throws?

Sadly, Dad was otherwise occupied during tonight's game, so his take will be absent from my report.

Xavier will be back in action at 7pm on February 1, at George Washington.