That was a vintage Xavier performance, but not in a good way. Last year, Xavier needed big points from Mark Lyons and Tu Holloway to stay with anyone they played. Tonight, it was more of the same. With Xavier having dug themselves a pretty sizable hole by the end of the first half, there was no clawing back for the Muskies. X worked at it; they managed to pull even with the Billikens on a couple of occasions in the second half. Every time Xavier got back into it, though, the offense stagnated and the defensive pressure waned. A 50-50 tie was greeted by a 8-0 Saint Louis run, and the Muskies could never get back on level pegging.

Tu Holloway came out of the gates looking to carry the day, as Kenny Frease and Mark Lyons both began the game on the bench. He scored or assisted 12 of Xavier's first 14 points and generally looked like his old self in the first half. Saint Louis went all out to stop him in the second, but he shot 4-11/0-3/14-14 on his way to 22/1/5 with 3 turnovers. Getting to the line and converting is a huge part of Holloway's game, and he was obviously doing that today. Scoring 22 points on 11 field goal attempts is pretty darn difficult to top.

Mark Lyons topped it though. He started the game on the bench for reasons that are not currently clear because, according to Coach Mack, his effort wasn't there in practice, and it took him a while to warm to the game once he got in there. He warmed up and kept Xavier in the game for stretches of the second half though. He ended the game with 27/3/1 on 7-12/5-6/8-8 shooting. About the only negative thing to say about his performance is that he turned the ball over six times, which is not a trivial quibble. Still, he was doing what he does best and was able to score the basketball from all over the court today.

After that, Xavier simply had nothing. On a team whose strength was supposed to be depth coming into the year, that's a really disheartening sentence to write. With 11:50 left in the game, Jeff Robinson (10/6/1 and 2 blocks on 4-7/0-0/2-2; another good game by Xavier's suddenly steady junior) dunked on an assist from Tu to make it 50-48. After that, Tu and Cheeks scored 19 of Xavier's final 20 points, with the only exception being a single free throw from Kenny Frease. Frease had 4/5/1 with 3 turnovers on 1-3/0-0/2-4 shooting. Andre Walker had 1/2/0 on 0-2/0-0/1-2 shooting. Those two combined for 37 minutes. Dez Wells had 0/4/2 with 2 turnovers on 0-3/0-1/0-0. Travis Taylor's made bucket was the only thing that kept him from an 11-minute trillion. For all of the depth that Xavier was supposed to have coming in, this is looking more and more like the same two-man team Xavier had last season.

Another disappointing facet of Xavier's game has been disappointing defensive effort, especially in the first half. Saint Louis led 41-29 at the half behind .517/.500/1.000 shooting. Teams seems to have identified a way to get easy looks at three against the Muskies; the Billikens were 7/14 from deep in the first half. Most disappointingly was how easily Saint Louis dominated the paint. The teams were even with 29 rebounds apiece, but the Billikens scored 28 points in the paint to Xavier's 16. Brian Conklin had 19 points and was completely unstoppable despite the fact that he is only 6'6", 230. Kenny Frease got 18 minutes and was a complete non-factor. I work hard to love Big Kenny and give him the benefit of the doubt, but he's gotta give me more than I saw tonight. I'm sure Coach Mack is thinking much the same thing. 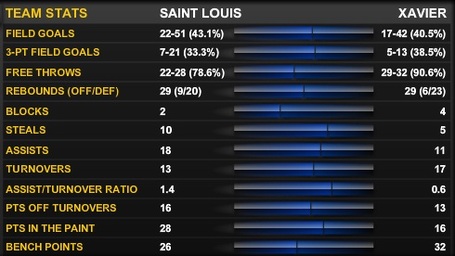 Odds and ends:
-You can see from the CBS game chart above that Xavier turned the ball over like it was their collective job. Seventeen turnovers isn't going to get it done against a stingy defensive team like Saint Louis.

-Saint Louis shot 31% in the second half including 0-7 from deep. Obviously, the adjustment came too late for Xavier.

-Free throw shooting was a big plus for Xavier tonight, shooting 29-32 as a team. Another 50% performance from the line would have made this one a blood bath.

-Xavier excelled when they pushed the pace and rotated the ball in the half court. When things stagnated, Xavier was lost.

-Jeff Robinson led the team with 6 boards; that young man has made a huge leap forward after two and a half enigmatic years.

Dad's take:
(My dad is an old-school basketball guy and a die-hard X fan, and he and I text throughout the games from time to time. His opinions can be both insightful and entertaining, especially pulled from their context. Below is a sampling of his offerings tonight.)
-"SLU six, Rob four! Always loved that kid."
-"Might want to guard Low."
-"Red in for Davis? Lyons spit in Mack's drink?"
-"We are getting owned inside."
-"SLU can't miss."
-"Kenny playing soft at both ends."
-"Biggest guy on the floor and he's getting pushed around... again."
-"Stand around and watch Tu. Cover the three!"
-"Down 12 at the half. This one is over... along with the season. Write it down."
-"We are sorry on D."
-"This is no fun to watch. It's not like we're playing hard and losing; I can take that. We just show no effort."
-"We have no man inside."
-"Their doofy white boy has 19. Ours has nothing."
-"Wells is not tonight."

As always, stay tuned for Brad's full recap. Xavier will be back in action Saturday at Charlotte. Tip off is at 7pm.