That one of the worst performances in recent history for Xavier. It was always going to be a tough thing to come into UD Arena and beat a good Dayton team, but showing up would have been a good first step. Xavier simply didn't today. After getting back into for against the dregs of the Atlantic Ten, Xavier went on the road to test how far "back" they really were. They're not. As a team that began the year with serious hopes for a deep tournament run, Xavier suddenly looks like a squad in search of an identity.

You have to play well to win on the road in the conference, and Xavier didn't today. Rebounding and three-point defense were - or should have been - points of focus for Xavier coming into today. X got crushed on the boards to the tune of 40 to 28. UD also had the advantage on the offensive glass 11 to 9. Xavier also gave up plenty of open looks from deep, allowing Dayton to connect on 11-28 three-point attempts. Not many of Dayton's threes were heavily contested, either. Finally, X shot an embarrassing 12-24 from the line. That's just making things hard on yourself by giving up easy points.

I usually highlight some lines from Xavier players, but this game was all about Matt Kavanaugh. He manhandled Xavier inside, putting up 20/9/2 on 8-9/0-0/4-4 shooting. He created second chances with offensive rebounds, made havoc on the glass, and showed more than one post move. In short, he was everything Xavier fans want Big Kenny to be. His ability to score almost at will in the paint gutted Xavier's efforts to shut down the perimeter.

Mark Lyons was once again Xavier's best player today. On a team that still isn't so sure of itself after the brawl, only the King of Upstate has shown the swagger that X was once known for. He posted 20/3/6 on 7-14/3-5/3-5 shooting today and only turned the ball over twice. Despite getting crushed late in the first half (on a clear undercut that was inexplicably not called), he was Xavier's most consistent spark during the entire game.

Tu Holloway went for 21/3/5 but had 4 turnovers and didn't look like his old self. He shot 7-16/2-6/5-6 and added a steal. Other than a couple of ill-advised baseline fadeaways and getting his pocket picked at half court, he had all the same outputs he did last year, but he just doesn't have the same spirit. Brad Redford went for 6 points on 2-2/2-2/0-0 shooting. I have no idea why he didn't get into the game sooner. Xavier was desperate for points in bunches, and Redford can provide that. It's not like he was going to hurt Xavier's defense; the team was giving out baskets like Halloween candy.

Xavier has to play defense to score points. With Kenny struggling, only Tu and Cheeks can create their own shots on a regular basis in the half court. Giving up 46 points in the first half is unacceptable, and Dayton was too good for Xavier to put the clamps on them like they did against Duquesne. Interior defense has been bad for Xavier; Jeff Robinson looks clueless, Kenny Frease was immobile today, and the guards had to get sucked in to help out. If Xavier doesn't play defense, their whole game falls apart. That was evident today. 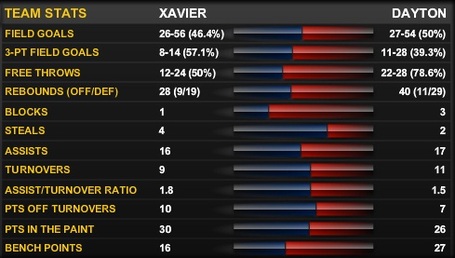 Odds and ends:
-You can see above what killed Xavier: no three-point defense, no presence on the glass.

-The Xavier Popes inform us that - aside from Tu and Cheeks - Xavier is shooting 55% from the line this year. That's embarrassing.

-You can tell how a coach thinks of his players by who plays; Coach Mack must see Justin Martin and Travis Taylor as just about worthless.

-Jeff Robinson put up 7/5/1 but still looks clueless on the defensive end.

Dad's take:
(My dad is an old-school basketball guy and a die-hard X fan, and he and I text throughout the games from time to time. His opinions can be both insightful and entertaining, especially pulled from their context. Below is a sampling of his offerings tonight.)
-"Cheap call on Tu."
-"We are in trouble if we put them at the line."
-"Got to go out to [three-point shooters]."
-"Why are we getting lost on that high pick? No excuse for that."
-"Red buries."
-"Kenny getting worked and it's slipping away."
-"Tu got cleaned and no call."
-"Not playing Fordham today."
-"Guy went right under [Cheeks] and no call."
-"Bad first half. Stick a fork in 'em. NIT is a good tourny."
-"Might as well play Red. No worse on D and at least he can shoot."
-"Mack getting outcoached by the spawn of Satan."
-"See the man, see the ball, Kenny! It's fundamental!"
-"We are getting outplayed in every aspect."
-"Red needs to fire."
-"Refs must be UD grads."
-"No focus or effort. No adjustments. Poor coaching."
-"I don't even want to think about what St. Louis will do to us."
-"We need a big with heart."
-"This whole game was sad. Doesn't matter how many Fordhams we beat, we can no longer play with a decent team. The fight and its aftermath still haunt X. They are done for this year. What might have been..."

As usual, stay tuned for Brad's full recap. Xavier's next game will be Wednesday at 7pm against St Louis at Cintas.