With nineteen minutes to go in the game, St Joseph's CJ Aiken knocked down a mid-range jumper to extend the Hawks' lead to 43-37. That must have flipped a switch in Coach Mack's crew, because the Muskies ripped off 14 straight points to establish a strangle hold on the game. After giving up 43 points in 21 minutes, Xavier gave up only 12 in the final 19 minutes of the game. Defensive intensity has been the best thing about Xavier when they're going well, and they had it again today. The team seems capable of only one good defensive half per game, though; after surrendering 39 in the first half today, they gave up only 16 in the second. Figuring out how to put a whole game together would be a nice next step for X.

Cheeks continued to carry the banner for Xavier, coming out blazing hot in the early going. He ended the game with 17/4/1 on the game on 6-11/3-5/2-2 shooting. Only a little early foul trouble kept him from going well over twenty on the game. He spent a good portion of the first half on the bench with two fouls, during which the Musketeers went flat. Lyons has taken over the primary scoring role for Xavier, and he is doing a good job getting X out of the blocks and onto the scoreboard.

Kenny Frease also got off to a good start in the paint. Despite the presence of one of the best shot blockers in the nation, Kenny posted 13/7/2 on 5-9/0-0/3-6 shooting. Kenny left a few points on the line and in the paint, but Xavier did a good job of re-establishing him in the middle after his customary early burst. Kenny also got a block and didn't turn the ball over at all. Big Kenny was the biggest guy on the court, and for once Xavier played like it. Getting him touches in the middle opens up the game for the rest of the team.

Remember when Tu Holloway was pouring home points and carrying Xavier with his scoring ability? That was last year and early this season; right now, Xavier has a handful of other guys who are able to get buckets. In response to that, Holloway posted 6/1/12 today with four steals and a block. He had four turnovers, but I'll take an A:TO of 3:1 from a primary ball handler any day. He shot 2-5/0-1/2-2, didn't foul, and played 38 minutes. Tu's the consummate senior leader, and his commitment to ball movement and defensive intensity is still setting the tone for the team's resurgent run.

It's a good game when a guy can go for 12/6/1 with 2 steals on 5-10/1-4/1-1 shooting like Dez Wells did and not get mentioned until the fifth paragraph of a breakdown of the game's stats. It's also a good game when a guy can go for 12/3/0 with a steal and a block like Jeff Robinson did and get mentioned a little bit later. Dez picked up a couple of knocks late in the game, but Coach Mack didn't seem concerned about it in his postgame comments. It's almost impossible to figure out what to think about Jeff Robinson; he's suddenly looking like a young Derrick Brown in the lane and asserting himself all over the floor. Good on the young man; I honestly have no idea what to expect from him in every game. He could go for 20 or 2 in the next game and I wouldn't be more surprised by either. 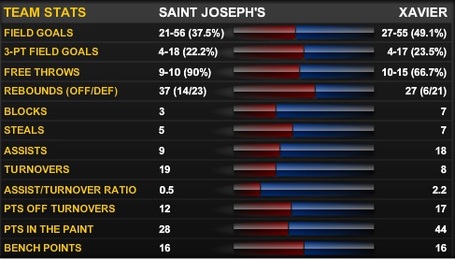 Odds and ends:
-You can see from the above CBS Sports stat graph that Xavier got killed on the glass. I can't explain this; X failed to take care of business under the boards, but it didn't come back to bite them tonight.

-Forcing 19 turnovers while only committing 8 was a big part of what got Xavier to the finish line in the game; 18 assists on 27 baskets was also a great performance for Xavier.

-Xavier has now assisted 55 of their last 77 made buckets.

-Halil Kanacevic had 9/10/5 at the half while Andre Walker chilled on the bench with two fouls. He finished the game with 13/14/5 and 7 turnovers, which is still a handsome line.

Dad's take:
(My dad is an old-school basketball guy and a die-hard X fan, and he and I text throughout the games from time to time. His opinions can be both insightful and entertaining, especially pulled from their context. Below is a sampling of his offerings tonight.)
-"Kenny off to a monster start!"
-"Dez, three-ball! Wells behind the back and finish - unreal."
-"Red would have had the place jumping - but he missed."
-"Kenny with the assist? Where is the real Kenny?"
-"Bad foul by Cheek. Guard him before he gets the ball. We are letting them stay in it."
-"What is with Rob? Looked like Wells."
-"Getting beaten by St Joe's. Sad. Kwhatever has ten boards already."
-"We need to box out; we should be smoking them."
-"Not a good start to the half."
-"Tu should be eating that kid's lunch."
-"Nice finish by Wells. What an athlete."
-After I compared Wells to a young Joel D: "The Young Joel D just finished well again. Word to your mother!"
-"Getting to the rim and not settling for jumpers is the key tonight."
-"Young Joel D is en fuego!"
-"Go right at Aiken, Big Kenny!"
-"Mistake to rest Cheek, Kenny, and Wells at the same time. We lost our drive."
-"Lazy D again. Dunked on by some stiff. Mack is hot!"
-"Kenny, what a monster! Feed the wolf! I've always loved that kid."
-"Behind the back pass from Kenny to Rob for a monster dunk? Buy a lottery ticket!"
-"Kenny just got blocked huge. [Aiken] could have blocked it with his armpit."
-"Game must be over, Griffin is in."

Highlights of the game can be found here. As always, stay tuned for Brad's full recap tomorrow. Xavier's next game is Saturday 1/21 at UD at 1pm. Stick around here for full coverage as the game approaches.