Xavier stumbled through the holidays and looked shaken early in the conference season, but things are really beginning to look up for Xavier. The swagger is - or at least appear to be - intact for the Muskies. Early and late it was Mark Lyons carrying the mail for Xavier. He put up 21/2/5 on 7-14/4-7/3-4 shooting and added two steals, though he did have three turnovers. It may have been a difficult thing to believe when he showed up on campus, but Cheeks is now a legitimate threat from beyond the three-point arc. His 4-7 today took him over 40% on the year, and he certainly doesn't have any compunction about putting them up.

I know we've spent a lot of time adulating Andre Walker on here, but he showed up and did a little bit of everything again today for Xavier. He stuffed the box score with 8/6/7 on 4-7/0-0/0-2 shooting and threw in a steal while only turning the ball over once. When the Bonnies went into a zone, Walker ran into the middle of the court, received entry passes, and reversed the ball with aplomb. At least four times he connected with a shooter on the weak side of the defense for a wide open three. Parents, if you think your kid might grow up to be 6'6" or taller, you could do a lot worse than having him (or her) watch how Andre Walker handles himself. The dude just knows how to play basketball.

Few things are more entertaining than good three-point shooting, and Brad Redford has suddenly rounded into form before the Xavier faithful could write him off. Redford posted a line straight out of his healthy prime with 10/0/0 on 2-3/2-3/4-4 shooting today. A steal was the only non-shooting statistic Redford contributed to the game. His lift seems to be back, which bodes well for X going forward. When he is spreading the floor and occupying defenders from behind the arc, Xavier becomes a really difficult team to stop.

When the Xavier offense stagnates as it did during their holiday slump, it is often due to guards trying to make a play early in the shot clock without reversing the ball. A lot of dribbling around looking for your own shot shows up in the stat sheet as lower shooting percentage because of tough shots and fewer assists because of poor ball movement. Today, Xavier shot 27-54/8-16/15-19 as a team and had 20 assists on those 27 made buckets. That kind of offensive performance is a great sign for Xavier going forward.

Jeff Robinson showed up again today, with his first back-to-back double-digit scoring games since IPFW and Iowa early last season. A lot of his playing time and production came after Big Kenny tweaked his right foot early in the game. Robinson ended up with 20 minutes and put up a 13/2/0 line on 6-7/0-0/1-1 shooting. Most of his points came from within 18 inches of the bucket, but he did manage to knock down one 15-foot jumper at the end of a shot clock. Jeff Robinson has had so many games that looked like he was turning the corner that you could get dizzy watching him. I'm beyond trying to figure him out, but I'll take 13 points off the bench.

Xavier once again had a big first half performance on defense before letting down late in the game. St Bonaventure shot .280/.125/.750 in the first half as X held them to 21 points in the period. After swelling the lead to as much as 22 points in the second half, Xavier tangibly let down in the late going; SBU put up 43 points on .481/.364/.929 shooting in the second half. They never got quite close enough to make it interesting, but they were within a couple of breaks of doing just that. For Xavier to play to their full potential this year, they need to get back to zipping teams up when they have a chance. 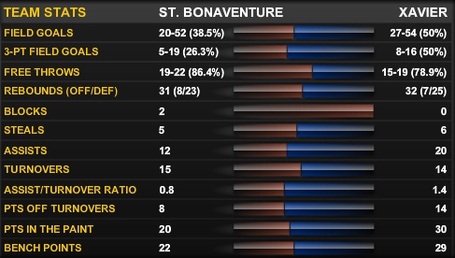 Odds and ends:
-Big Kenny tweaked his right ankle today; Coach Mack said that he was having some problems with his heel. We'll keep you posted as details emerge.

-Dez Wells couldn't get it going today from the floor and he even missed a couple of dunks, but his 7/9/3 with a steal and no turnovers is a heck of a line from a freshman who could have checked out of the game early if he wanted to.

-Takeoff Trav went 6/3/1 in 14 minutes. I never thought we'd get to a point when Jeff Robinson was dwarfing Taylor's output.

-Tu was pedestrian today, with 12/3/3 on 3-7/1-2/5-5 shooting, but he once again set the tone for the team and got the ball up the floor in a hurry. Two of his three turnovers came on questionable offensive foul calls.

-Xavier had 14 fastbreak points and 30 points in the paint today, outpacing St Bonaventure handily in both areas.

-Andrew Nicholson got 20 points today, but Xavier also forced him into 5 turnovers.

My dad's mom celebrated her 95th birthday today; for some reason, that precluded his viewing of the game live. As always, stay tuned for Brad's full recap. Xavier wraps up the homestand this coming Wednesday with a 7pm tip against St Joseph's.