At a time where Xavier needed to reassert their position in the upper tier of the Atlantic Ten, the Muskies opened up a can on the undersized Duquesne Dukes. This game was hands down the team's best game since the brawl against UC, and it began with a serious effort on the defensive end. Xavier was sensationally stingy in the first half; the Dukes ended the period with 16 points. X held them to a .261/.000/.571 shooting line, scored 15 points off of 8 Duquesne turnovers, and crushed the Dukes 23 to 12 on the boards. Xavier also posted 11 offensive rebounds, had a dozen second-chance points, and outscored the Dukes 28-10 in the paint. That is a comprehensive butt-kicking, and Xavier dished it out in the first half.

Setting the tone for Xavier was their recently-maligned leader, senior point guard Tu Holloway. Tu didn't score with his usual efficiency, needing nine shots to get his 11/3/11, but he did everything else as well as you could ask. He mentioned on several occasions over the offseason that he felt more comfortable as distributor than leading scorer, and his 11 assists against only 2 turnovers attest to how comfortable he feels moving the ball around. He also set the tone on defense and forced the ball in to Xavier's bigs early in the game. In the 36 minutes before Holloway left the floor for good, Xavier had 20 assists and 7 turnovers and outscored the Dukes by 34.

It wasn't all Tu Holloway though; the guy you're going to see on ESPN was freshman sensation Dezmine Wells. Xavier's high-flying forward put up 16/9/0 on 7-7/1-1/1-2 shooting with a block, a steal, and a turnover. He was also on the receiving end of four or five sensational alley-oop dunks; his natural athletic ability puts him on another level against nearly any team that Xavier plays. There's not a whole lot else to read into the stat line, but man can that boy finish. The one-man highlight reel he compiled is embedded after the jump.

Jeff Robinson - who frequently disgusts us here at BotP - had his annual great game tonight. I'd love to say that he's turning the corner or figuring it out, but I'm beyond hoping that from his performances. Credit where it is due though; Robinson was integral to what Xavier did tonight. His 12/6/0 came on 5-6/0-0/2-4 shooting; more impressively, every last one of his six boards came on the offensive end. Offensive rebounding is as much a function of effort as it is anything else, and to see a player who has frequently vexed Xavier fans with his listless performances out there scrapping is a great sign for the team.

Big Kenny only played 13 minutes tonight; the pace and nature of this game was never going to favor the big man. He made the most of his time on the floor though; his 11/6/0 came on 4-6/0-0/3-4 shooting. He also added two blocks and didn't turn the ball over. Andre Walker was also not featured in the game, but he managed to get himself into a lot of facets with a 4/3/3 line on only two shots. When two bigs can contribute 15 points on 6-8 shooting and combine for only one turnover in a game dominated by perimeter play, that's a pretty good day for X. 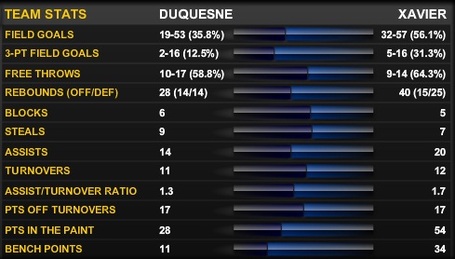 Odds and ends:
-The above (courtesy of CBS Sports) is the statistical comparison of the two teams from tonight's game. As you can see, Xavier killed Duquesne on the boards and in the paint, exactly like they should have.

-Brad Redford knocked down two of his four three-point attempts and threw in a board and an assist. Lift is a big part of deep shooting, and Redford is coming off of a major knee surgery and a follow-up procedure. If he's finally finding his range, that's great news for Xavier fans.

-Coach Mack referred to Robinson and Martin as "The North Lawrence Connection" post game and mentioned that they combined for 7 of Xavier's 12 turnovers. Congrats on the cool nickname, I guess.

Sadly, my dad was not able to view the game tonight. As always, swing back by tomorrow for Brad's full recap. Xavier will next be in action this Saturday, 1/14, at noon, hosting St Bonaventure.