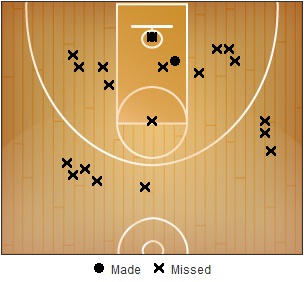 After falling behind early and having to claw back in borderline historic fashion in their last two games, Xavier could have really used a wire-to-wire victory in dominating fashion. What they got tonight was something like that. Defense has been the gateway to offense for the Muskies this year, and XU came out of the gates with a stifling defensive effort in the first half. To the left is Butler's shot chart for the first half. The Bulldogs shot 5-25/0-9/13-20 in the opening twenty minutes of the game, and Xavier picked up five steals while forcing eleven turnovers. Things let down a little bit in the second half - Butler finished the game with a still-poor 19-62/2-21/21-28 shooting line and 16 turnovers - but it was Xavier's effort on the defensive end that got the Muskies out to such a convincing start in tonight's game.
At the center of things on both ends was potential All-American guard Tu Holloway. Tu's line of 16/7/3 was marred by five turnovers, but he helped pick up the slack with six steals of his own. He shot 1-7 from the floor and 0-2 from deep, but he got to the line 16 times and was able to convert 14 of them. A shooting percentage of 14.3 is something less than ideal, but the efficiency of 16 points from only seven shots is pretty darn good. On the season, Holloway is now getting a sensational 1.71 points per shot.
Playing mostly off the ball on the night, Mark Lyons posted 16/2/3 on 4-10/0-3/8-8 shooting. Almost as importantly, Lyons only turned the ball over once. Xavier coughed the ball up 10 times in the first half and only 3 in the second, and a lot of that was attributable to Cheek's ability to keep hold of the ball. All four of the buckets Lyons made were classified as layups in the box score. He wasn't quite able to get through the Butler defense at will - or else he would have done it more often - but he did very well getting to the rim in transition.

Speaking of people who spend a lot of time around or above the rim, 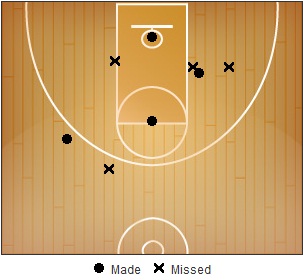 Dezmine Wells showed up for 13/4/0 with two turnovers on a 5-9/1-2/2-5 shooting line. His shot chart to the right over there shows that there is more to his game than just the dunks that are going to show up on highlight films. Wells showed impressive touch on a couple of mid-range baskets and his contributions - aside from that mark from the charity stripe - are more than acceptable from a team's tertiary scorer. Xavier fans should be beyond excited at the level of play they've seen from the freshman so far; he's going to be a scary ball player someday very, very soon.

Foul trouble once again limited Kenny Frease's minutes and effectiveness (and the less said about either, the better), but Xavier's bench is no longer just Andrew Taylor and the shadow of Jeff Robinson. Travis Taylor (no relation that I'm aware of) stepped in and contributed for X off the bench, posting seven points and seven boards in the first half on the way to 9 and 8 on 3-7/0-0/3-4 shooting. Justin Martin also showed some versatility against an admittedly slight Butler front court, coming on to guard the four for stretches in the first half as Frease and Andre Walker sat on the bench with two fouls each. Martin had 5/4/1 in the first half and combined with Taylor to demonstrate a depth that Xavier hasn't seen during the Chris Mack era.

Odds and ends:
-Jeff Robinson had two points, five boards, and a block in eleven minutes. You know the drill by now; super talented, usually looks super lost. His tip dunk tonight was one of those flashes of brilliance that keeps Xavier fans from giving up on him just yet.

-Great effort by the Muskies from the line today, going 29-37 (78.4%). Xavier's free throw shooting should steadily improve from this rocky start... right?

-Xavier's 2-12 from deep, on the other hand, is both poor and not characteristic of X this year. The Muskies came into the game shooting about 40% from deep as a team.

-Tu Holloway gave Chrishawn Hopkins a miserable time tonight, and the sophomore ended the game with 2 points on 1-3 shooting and 5 turnovers.

Dad's take:
(My dad is an old-school basketball guy and a die-hard X fan, and he and I text throughout the games from time to time. His opinions can be both insightful and entertaining, especially pulled from their context. Below is a sampling of his offerings tonight.)
-"Stuck watching Florida in OT."
-"Oh good, Taylor on the line."
-"Blow out early."
-After I said I didn't think Cheek liked Robinson right now: "Cheek has good taste."
-"Red in to settle them down."
-"Wells is smooth. Tu may be a player."
-"Red D!"
-After Cheek's layup from a made Butler FT: "That's hustle. And one."
-"Wells looks like a man among boys."
-"[Halftime] lead, but not pretty."
-"Not good."
-"Jenny turns it over like it's his job."
-"Wells is a beast with speed."
-"Tu keeps getting to the line."
-"Wells is en fuego."
-After Kenny ran that guy over: "Ran him over."
-"Oh no, Robinson."
-"Nice of Tu to take it from the cripple."
-"[Kenny] is a space eater."
-"Kenny, intimidator!"
-"Be a cold day in Mexico when Cheek takes garbage from anyone."
-As Cheek followed Kenny through the lane: "Kenny, pulling guard."
-"Red knows you don't take a charge at this stage of the game."
-"Not pretty, but effective. [Butler] fans checked out early."

As always, come back for Brad's full recap tomorrow morning. Xavier's next game is the Crosstown Shootout, Saturday at 12:30pm.