If you come here often and remember as far back as last week, you may recall that I posted a couple of win expectancy graphs detailing Xavier's odds of winning the Georgia and Vandy games as those game progressed. Part of that was in response to the ignoble strife of the madding crowd after X cruised to victory against Georgia, but it was mostly to outline how incredible Xavier's storming comeback against Vanderbilt was. Teams that are down ten on the road like that are usually dead and buried, and I didn't suspect we'd see another rally of that magnitude for a good while.

Well - as every Xavier fan knows - we barely had to wait a week. Perhaps sensing my doubt, the Musketeers dialed up a mind-numbing encore to their first in-game resurrection. With Mark "Mooga" Lyons at the line with Xavier trailing 55-36 against Purdue, the lack of time left in the game appeared more a countdown to a merciful end than an obstacle to a second implausible comeback. Big Kenny's stick-back of the missed free throw, as you can see by the attached chart from kenpom.com (after the jump), had little statistical impact on the expected outcome of the game. From that point on, Xavier would have to be almost perfect in their execution while Purdue would have to become almost entirely incompetent. Obviously, that's not a combination of things that happens often, especially not when one team has been 19 points better than the other up until that point. 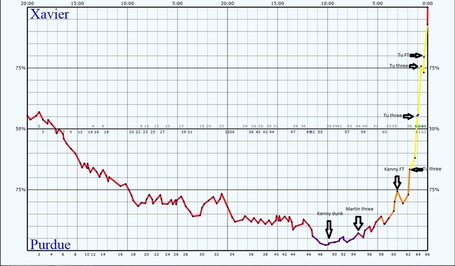 That's really the take away message from this game. A team can come back from eight, maybe ten points down in ten minutes by simply playing amazing basketball. A team simply can't pull back 22 points in ten minutes like Xavier did unless the other team completely loses the plot, and Purdue's 2-12 shooting with 5 turnovers during that span certainly qualifies. Part of that can be attributed to Xavier's defense, but not all of it. I know it's hard to complain about a team that is 6-0 and has just knocked off three straight BCS teams, but wouldn't you love to see a simple, wire-to-wire win against Butler this week?