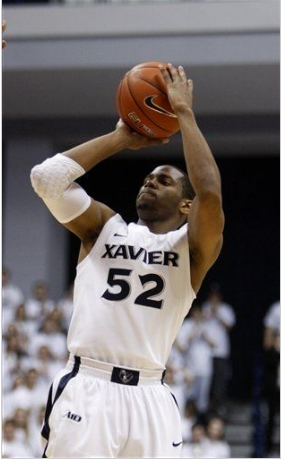 I probably don't need to tell how this turned into one of the greatest comebacks of all time, but I will anyway. In the first half, Purdue played suffocating defense. Tu Holloway, Mark Lyons, Dee Davis, and Dez Wells were harried, chased, bumped, and ran in almost every way imaginable. Purdue's combo of Lewis Jackson and Terone Johnson turned in one of the finest defensive performances ever seen on the visiting side of the Cintas Center. Holloway and Lyons once again disappeared and the game slipped farther and farther away as the half went on.

With 8:56 to go in the first half Lewis Jackson capped a 22-4 Purdue run with a driving layup. The crowd, dressed all in white, was desperate for any reason to cheer. Xavier's players looked like they were seeing the ghost of last year's UD los, and Coach Mack was unable to adjust to a defense that was double teaming the post from bottom to top. Quite simply, the Musketeers were being throttled in every facet of the game.

In most stories this is where the heroes would rise from the mat to being clawing their way back into the contest. That wasn't the case today though. The Musketeers kept floundering until they found themselves down 31-15 with 2:33 to play and very little going right. The unholy flood of turnovers stood at 17 (Kenny Frease would manage one more), and the high-octane backcourt of Lyons, Holloway, and Wells had managed six points between them. Finally, though, the men from X showed a spark. Brad Redford buried a three that sparked a 7-0 run. Only a missed offensive basket interference call kept the lead from being single digits at the half. The crowd was back in it, it was only 33-22 despite Purdue having plenty of opportunities to kill the game, and the offense seemed to be coming around. This, then, was the start of a comeback.

Except it wasn't. Purdue tore off a 22-14 run to open the second half and push the lead to a seemingly insurmountable 55-36 at the 9:53 mark. With less than ten minutes to play, Xavier should have been dead and buried. The offense had at least come out of the coma, but the defense was getting singed by Robbie Hummel and Lewis Jackson, Dez Wells was missing in action, and Kenny Frease was completely flummoxed by the persistent double teaming.

So now our story must be a tragedy. This time, the hero doesn't get up, this time, Casey at the Bat like, hubris has caught up and a bitter lesson is learned. Once again though, the Musketeers changed the script. It started small, Kenny Frease grabbed a missed rebound and dunked it home. A few applauded, but 55-38 is hardly anything to be excited about. Momentum built slowly after that. Lyons made a free throw and then a layup. It was 55-41, and the crowd was starting to stir.

After a Purdue full timeout with 8:40 to play, the unthinkable happened. Xavier started to find another gear, and started to find it quickly. Purdue answered at first but, three minutes after it had been 19, the lead was down to ten. Robbie Hummel knocked down a jumper to calm Purdue with 6:29 to play and after that the Boilermakers didn't score from the field. Just as it had against Vanderbilt, a tenacious Xavier defense opened things up for the offense. First it was Holloway, then Walker, then Frease, and suddenly it was 60-55 with 2:26 to play. By now, the Cintas Center was rocking. Everyone in attendance and everyone watching and listening knew what was about to happen.

With just under two minutes to go, Tu Holloway came in to close. To that moment he had ten points, he was 0-2 from behind the arc and just 2-6 from the field. Tu Holloway either didn't know that or didn't care, because he decided it was winning time. With 1:55 to go he jabbed Ryne Smith hard right and then stepped back to make it 60-58. On the next possession Tu rolled off a screen on the left side, took a dribble to set himself, and made it 61-60. Purdue was staggered, but they weren't down yet. Robbie Hummel tied the game at 61 with 54 seconds to play, but Tu was not going to be denied. Next time down the court he worked a double team to the right of the key before finding himself isolated with Lewis Jackson at the top. There were just over 40 seconds left, Holloway was on fire, and Jackson knew what was coming.

Make no mistake, Lewis Jackson had a tremendous defensive game. For 30 minutes he held two of the best guards in the nation in check, he managed four steals, he was in passing lanes in on ballhandlers, he was everywhere. It was late now though, and Jackson was showing the strain. Tu Holloway was not going to let his team lose and Lewis Jackson desperately did not want his team to. For just one second though, Jackson blinked. Fearing Holloway's speed, he took one drop step to his right. With all the space he needed, Tu Holloway buried his third of three straight three pointers. Jackson's shoulders sagged, Tu smiled and nodded to the crowd, and a legend cemented his place.

Can Big Kenny stay in the game and be effective? 10/5/1 isn't awful, and Frease played well down the stretch. However, the big man completely failed to adjust to the double teams early in the game and turned the ball over four times. Four turnovers for anyone is bad, four for a big is inexcusable.

How well can X defend the perimeter? Purdue was 5-18 from deep. The five came at big times and early in the game, but on the whole Xavier did an admirable job on a team that shoots the three extremely well. The perimeter defense in the last ten minutes was utterly stifling.

Can Xavier crack a tough half court defense? Not today. Purdue dominated defensively in the first half. Xavier finished at 54% from the floor, but that was a result of the baskets garnered by run outs and a nice night from deep. Don't let the percentages fool you, 18 turnovers are not indicative of an offense operating smoothly.

- Just to get it out of the way early, Jeff Robinson is abject. His talent has teased for three years now, but his two minutes tonight were a lesson in ineffective timidity.

- Brad Redford sparked the team again. He played 16 minutes and acquitted himself fairly well. Mark Lyons' foul trouble gave Redford a decent opportunity and he made it count. He wasn't a world beater, but he showed he has minutes in him coming back after injury.

- Dez Wells might be human after all. The brilliant freshman took one shot and had one rebound in 14 minutes. If not for that one board, he would have managed the dreaded trillion.

- Joel said in the preview that not falling behind was a key. Despite the comeback, he was right. Xavier is playing with fire by continuing to allow themselves to get into holes only to have Tu rescue them. Games like Charlotte and Marquette do happen, and the team would be wise to remember that.

- You don't see that every day. This is the kind of game that a fan watching on DVR would have been tempted to fast forward. I am still not sure how a team can play such an incredible ten minutes of basketball after 30 minutes of shambolic ineptitude. From the 9:53 mark on, X was 9-10 from the floor and scored 30 points. Amazing.