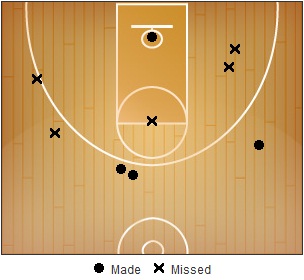 I had already started banging away about turnovers and missed free throws halfway through the second half of this game, because it looked dead and buried. We'll get there in a minute, but this game belonged - again - to Tu Holloway. It wouldn't be a nationally televised Xavier game without the color guy - this time the insufferable Jimmy Dykes - pointing out that Tu didn't produce half of his season averages in the first half of the game. It's like they don't know. Holloway had 4 points on 1-2/0-1/2-3 shooting at the half, but he finished the game with 21/4/4 on 5-9/3-5/8-9. His shot chart to the left there isn't crowded, but his baskets were timely. All of his three-point baskets came when Xavier needed him the most; cold-blooded efforts at 1:49, 1:05, and :40 to complete Xavier's sensational comeback.

And what a comeback it was. Xavier trailed for most of the game and looked awful doing it, and the Muskies were down 55-36 with 9:53 left when Mark Lyons missed the front end of a one-and-one. Kenny Frease snared the board and stuffed it home before taking off back down the floor with his arms extended like a little kid pretending to be an airplane. It seemed patently ridiculous at the time - Xavier was still down 17 with nine and a half to play, but apparently Big Kenny knew the game had just shifted.

During their run, Xavier got it done statistically on both ends of the court. On defense, the Muskies forced the Boilermakers in 5 turnovers and a shooting line of 2-12/0-6/4-5. On top of the increased defensive intensity (and efficiency), Xavier started to make plays on the offensive end. Xavier shot 5-6/4-4/7-11 the rest of the way, and the only missed field goal was rebounded and stuck back by Andre Walker. Combine that with only turning the ball over twice in that time and Xavier averaged an insane 1.88 points per possession from Cheek's missed FT forward.

None of the Muskies' stat lines were particularly pretty tonight, owing to the 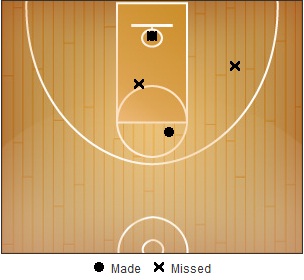 sensational amount of turnovers Xavier committed, but Andre Walker's 10/4/1 on 5-8/0-0/0-0 shooting warrants mention (that's his shot chart to the right). Walker also threw in two blocks and a steal while committing three turnovers. The fact that he put up ten points is a testament to what kind of player he is. Not a lot of plays get called for him, but he's always putting himself into good positions to score. Whether receiving the extra pass inside from a teammate or grabbing a board and taking it right back up, Walker is the master of the quiet ten-point game. His versatility and acumen on both ends of the court are big parts of Xavier's success thus far.

The fact is that, despite another great result, this was not a very well-played game for most of the way by Xavier. The Musketeers turned the ball over 22 times, including 18 times in the first half alone. All credit to Xavier for tightening things up after the interval, but they were luck not to be buried by halftime. Xavier's struggles at the foul line continue, as they shot 16-27 (.593) as a team. Taking out the inimitable Tu Holloway's 8-9 drops that number to 8-18, which is brutal by any measure. Those are not the kind of numbers that allow a team to consistently compete against top-level ball clubs. For this team to attain its lofty potential, it is going to have to start taking care of the ball and executing from the line. Until those two things happen, expect more tense games and at least one regrettable loss.

Odds and ends:
-Jeff Robinson once again looked lost out there. Not only did he not contribute any meaningful stats to the game, but his defensive lapses briefly contributed to making Lewis Jackson into Jimmy Dykes' favorite player ever.

-Brad Redford nailed another big three and almost had a four-point play. Both of his misses rolled out on him, but he's starting to look like himself again.

-Mark Lyons (!) and Travis Taylor jointly led the team in rebounding with six each. Kenny Frease finished with five despite being the biggest player on the floor. Kenny did a good job of making a lot of space, but he never seemed to be able to latch onto the ball.

-Xavier shot 6-12 from deep and continues to be one of the top teams in the nation from behind the arc. Despite their success, they never looked to be content to settle for a three, which served them well.

-Dez Wells didn't score, only shot once, and only got one rebound. He's a physical specimen, but he is still a freshman.

-X forced Purdue into 40 jumpers, of which they only made 12. A lot of things went wrong for the Muskies today, but interior defense was rarely one of them.

-No Muskie had a positive A:TO today.

Dad's take:
(My dad is an old-school basketball guy and a die-hard X fan, and he and I text throughout the games from time to time. His opinions can be both insightful and entertaining, especially pulled from their context. Below is a sampling of his offerings tonight.)
-"Ticky call. Two early [on Cheek]."
-"Let's see what Davis can do." [Davis TO] "Not much."
-"We have to get a whole lot better to just look awful."
-"This is sad: 11 TO."
-"Nice D, Jeff." "Rob can not cover."
-"Tu missed Red and turned it over."
-"Turning it over like it's our job. 4 FG. 14 TO."
-"Aaron Williams looks like he is going to puke."
-"When do the Browns play?"
-"And 1!" [Redford missed FT] "Or not."
-"Missed that [basket] interference [at the end of the first half]. I'm not sure we can come back this time."
-"Red, the Moses from the 'Muth, will try to lead them out of the wilderness."
-"Barlow is pushing off!" [After Barlow gets called for offensive foul] "See, that's what I meant about Barlow!"
-With 10:46 left: "It's over. Write it down."
-"Barlow always leads with his off hand."
-"Need stops. Need Posey on the press."
-With Frease heading to the line: "Jen needs to act hurt." [Frease hits them both] "He's money!!"
-"331st in FT%. Embarrassing."
-After Tu's second three: "Red-like!"
-After Hummel took a spill to get to the line: "Homered at home." [Hummel misses FT] "Ball never lies."
-After Tu's third three: "Yes! Stone cold!"
-"Grab the ball!"
-"I'm getting too old for this stuff!!"
-"Your mom started folding laundry with ten minutes to go. Credit her with that win."

Brad has the late shift tonight, so the full recap will run in the middle of the day tomorrow. This will preempt our usual weekly look around the conference. Xavier's next game is at Butler, Wednesday, 12/7 at 9pm.