Xavier is finally back on the winning track today, but they were again less than stellar in Hawai'i. The offense again looked capable, but Xavier's defense was occasionally disturbingly listless. Carrying a double-digit lead through most of the second half, X was once again unable to stretch the advantage out far enough to bury the game to any meaningful extent. Still, Xavier will depart Hawai'i with one more win under its belt and its full complement of players finally available. 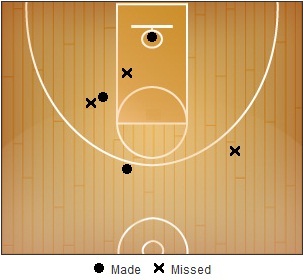 What you see to your left there is the shot chart of a player who posted 21 points. That is not a misprint; Tu Holloway put up 21/3/7 on 3-6/1-2/14-15 shooting. He also had just three turnovers. That is Tu at his incisively efficient best. He got everyone involved, took his shot when it was there, and made very few bad decisions. He also attacked the basket when given a window and collected contact as often as possible. Xavier didn't have a good time in Hawai'i, but Tu will leave the island as the tournament's top scorer and with his reputation as a great player wholly intact.

Mark Lyons posted his first career double-double, but the manner in which he posted his points was somewhat forgettable. Cheeks went for 17/10/2 on 6-19/1-4/4-7 and was visibly frustrated at times, especially with his free throw shooting. Hard to blame him for that. Lyons seemed a step sluggish today, as most of the Musketeers have in Hawai'i; perhaps getting back onto the continent will do him good. In the meantime, he did manage to track down pretty much every unclaimed rebound that bounced more than once. His shooting was off today, but Xavier is still a better team with Lyons going well. I, for one, am okay with seeing him try to shoot his way out of it. 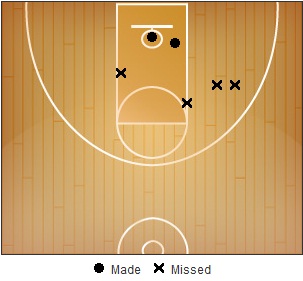 Kenny Frease again struggled to physically assert himself against smaller opponents today, and the whistle once again didn't help him out. To the right is Frease's shot chart; you can see from his shooting that he was not able to establish himself in deep post position, necessitating the use of short jump shots. He also had a little bit of trouble finishing and again succumbed to the temptation to dribble away from the basket when a double-team arrives. I love Kenny as much as anyone outside of his mother, but 6/3/1 with a block on 3-7/0-0/0-0 shooting just doesn't get it done. The big man needs to show up every night for Xavier to get where they want to go.

Brad Redford posted the most exciting 5/1/0 you're likely to see in quite some time. Redford knocked down a little pull-up jumper after a drive facilitated by a head fake, then drilled a deep three ball off of a cross-court pass from Tu Holloway. While a 2-2/1-1/0-0 shooting line doesn't usually merit a paragraph in the breakdown, the fact that Redford finally snapped out of an 0-17 streak from deep is good news for Muskies fans. Hopefully he continues to resolve things and gives X another scoring threat going forward.

I have to come back to Xavier's defense to conclude here. X has the half-court scoring ability to win a lot of games, but the team is at its best when it is converting stops on one end to easy baskets on the other. Southern Illinois shot .400/.250/.727 as a team today and grabbed 13 offensive rebounds while only turning the ball over 11 times. Xavier's defensive intensity and ability to close out a possession looked worryingly absent at times today. The Muskies need to get back to zipping teams up at the defensive end to be as successful as they'd like to be in the long run. Hopefully getting the heck out of Diamond Head will help facilitate that; I know Dez Wells' return will.

Odds and ends:
-Jeff Robinson looked like his whole career today. He had 9/1/0 on 2-2/0-0/5-6 shooting. He also looked helpless at times on defense and was so unaware on the court that he got hit in the head by a pass from Cheeks after a pick and roll. I'm beyond knowing what to expect from Robinson; the spectrum of potentially outcomes with him on the court is insanely wide.

-Xavier shot 36-48 (75%) from the line today, which was a welcome change from the recent trend. X needs to pull out of the free-throw shooting funk; it has already cost the team at least one win.

-Takeoff Trav added 13/3/1 and Dee Davis had 3/0/1 with 4 steals. Taylor had some trouble finishing but the effort was there; I believe Davis will be an elite on-ball defender sometime very soon.

-Justin Martin started but played sparingly and posted a trillion. It will be interesting to see what that was all about.

Brad doesn't have internet until at least Tuesday, so there will be no traditional recap for this game. Dad wasn't able to watch the game, so his take is also absent. Xavier will next play against Gonzaga at Cintas at 8pm on Saturday, 12/31.