What happened: Oral Roberts 64 - Xavier 42
A lot of what went wrong for Xavier today began 39:51 into the Crosstown Shootout, but you already know that. Xavier's box score is a scatter plat of pain, with nobody really showing a combination of output and efficiency that would normally be worth pointing out. It's not possible to take anything away from this game in terms of analyzing the team going forward - you can't evaluate a team on how it looks with three starters sitting out. All of Xavier's ambitions for the season remain intact; today was a bitter pill to swallow for fans and players alike. 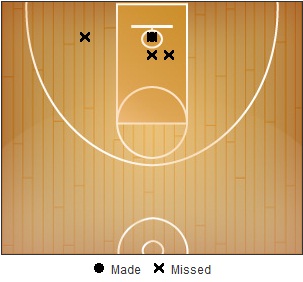 We said before the game that Big Kenny was going to have to a monster day for Xavier to stay in this one. Unfortunately, that fact also did not escape the Oral Roberts coaching staff. Frease was doubled as soon as he touched the ball for the entire afternoon; ORU was simply determined not to let the big man have a clean look at anything (see his shot chart to the left). His 4/5/0 on 2-9/0-0/0-0 shooting only scratches the surface of the frustration he must have felt today. The fact that he picked up three offensive boards and two blocks hints that his effort level was intact. Oral Roberts committed to choking off Frease's supply of the ball and smothering him on the post, and Xavier didn't have anyone on the floor who could punish them for it.

Leading a team is a tough assignment for any freshman point guard; when that team is missing three of its top four scorers and suddenly thrown into turmoil on the court, the task becomes monumental. It was that challenge that faced Dee Davis today on the court, and the results were mixed. Davis had to stay out of foul trouble, play three times his normal compliment of minutes, run an offense of guys who are accustomed to being role players finding the spaces that defenses allow when they focus on stopping Tu and Cheeks, and force a ball to the post against a team who knew it was coming. His 10/3/6 line with 4 turnovers and 2 steals is respectable under those circumstances. He warmed into the game even as most of the Oral Roberts team was cooling from it, but he gets full marks continuing to attack and not shrinking from the task. Davis is a fully capable backup point at this time; running the game is still a work in progress. 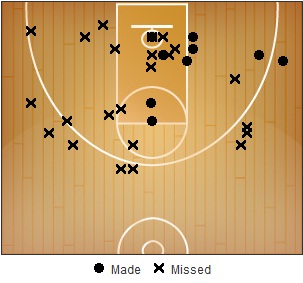 As a team, a lot of things went wrong for X. A total of 17 turnovers is not acceptable, and having 13 of them coming on live ball steals is really going to set up some easy buckets for the other team. The Muskies were also 8-17 on layups. This is also not good, but it speaks to a couple of larger points on the game. One is that ORU was committed to packing the paint; X was often trying to score over more than one Golden Eagle in the middle. The other is the inability of anyone on Xavier to loosen Oral Roberts' grip on the paint. The Muskies were a regrettable 7-29 on jump shots; with no reason to stray out of the paint to contest shots, Oral Roberts simply didn't. The shot chart to the right there also shows Xavier was absurdly unable to score from the left side of the floor. I'm at a loss to explain this, but it's not the first time X has had that problem.

Andre Walker's game should not go unnoticed. His 2-7/0-0/2-4 shooting line reflects the fact that he was trying to take on a larger share of the scoring load than he is accustomed to, but his 6/7/3 with a block and only one turnover is the kind of stat-stuffing performance Xavier has come to expect from the grad student. He also spent a little time as the primary ball handler when Dee Davis needed a breather. Walker is the ultimate glue guy, filling in the cracks between his teammates skill set with whatever is necessary; he's going to be a huge asset this March.

Odds and ends:
-Justin Martin posted 5/3/0 on 2-3/1-1/0-0 shooting. He flashed a pretty good offensive skill set, but foul trouble kept him from impacting the flow of the game as much as he should have.

-Brad Redford had a season-high 35 minutes today but struggled to find his shooting stroke. He still seems to be rushing his shot; I'm hoping these minutes won't have a long-term impact on his knee's health.

-Travis Taylor's 11 and 9 was good; his 5-13/0-0/1-1 shooting line illustrates just how much trouble Xavier was having finding any joy in the paint.

-Dominique Morrison put up 19/4/4 on 7-10/5-8/0-0 shooting and generally killed Xavier every time they looked like coming back into the game. X simply had no answer for his perimeter ability; Dez Wells would have really helped.

Dad's take:
(My dad is an old-school basketball guy and a die-hard X fan, and he and I text throughout the games from time to time. His opinions can be both insightful and entertaining, especially pulled from their context. Below is a sampling of his offerings tonight.)
-"Redford will be fortunate to go 25 minutes."
-"Nervous about this game. Iffy starting lineup."
-"Gotta pound inside."
-"Walker with handles."
-"Robinson in and promptly commits a foul."
-"Not looking good."
-"No one outside [on ORU's defense]. Great strategy on their part."
-"Martin has brought some energy. Are the brawlers on the bench?"
-"Redford is rushing. This is tough to watch."
-"We have given up too many easy layups."
-"People have to move. Ken is always doubled."
-"Ten TO, six buckets."
-"Kenny can't get the ball and no one can shoot. What we need is a power outage at Cintas."
-"Kenny looks lost. He needs help."
-As the game got out of reach and bitterness set in: "Just showed Tu. He looks stupid."
-"Hope he and Lyons have learned to stop yapping."
-"They keep trying to get it to Kenny and he is not open."
-"No fire on D. Martin is stupid for running at a jump shooter."
-"Loooong flight to Hawai'i coming up."
-"Sweet assist from Red to Davis."
-"The guys who played today have no reason to be embarrassed; the sorry bunch in street clothes do."

That's it from me. As always, stay tuned for Brad's full recap tomorrow morning. Xavier's next game is in Hawai'i against LBSU at 11pm Thursday, 12/22.