A Look At the Suspensions

Share All sharing options for: A Look At the Suspensions

The next four games of Xavier's season are going to be contested at less than full strength, but it will be the first two of those four games that will really test the Muskies' mettle. Missing Tu Holloway for one game and Mark Lyons for both will pest pressure on freshman point guard Dee Davis at the one and three-point specialist Brad Redford at the two. Anyone else playing in either position will be pressed into service out of position.

The yellow in the first chart and the orange in the second chart represent the production of the players who will be active for those games. If it's too small to read, clicking the charts will make them pop larger.

On a whole-team level, Xavier is going to have to replace a good deal of both minutes and production while Tu, Cheek, and Dez sit in the corner and think about what they've done. The below charts show what the minutes situation will be during the suspensions. The chart on the left shows how many minutes Xavier will have to replace the first game; about 42% of their MPG. The second game looks a little bit better; Xavier will only have to come up with about 25% of the minutes per game. 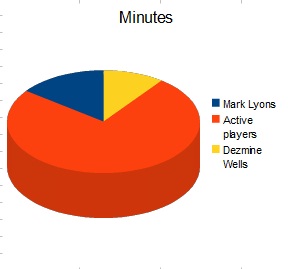 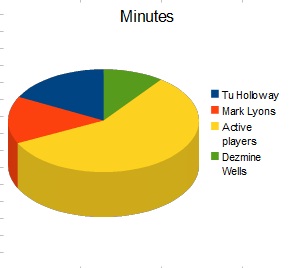 Scoring is an even more grim picture; more than 58% of Xavier's points per game will be sitting on the bench come Sunday against Oral Roberts. That's to be expected when three of your top four scorers are out, but it's still a tough pill for Xavier to swallow. Things improve with Tu's return against Long Beach State. Holloway's scoring form is going to have to be in to keep up with Casper Ware with 35% of X's scoring still in street clothes. 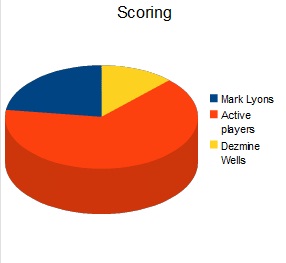 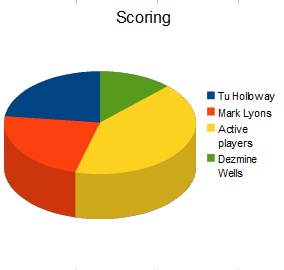 Good news, Muskie fans! Rebounding is the facet of basketball in which Xavier will have the least work to do for business as usual. With only 32% of X's rebounds missing in the first game - and Big Kenny doing what he does - rebounding should be a strength against an undersized ORU squad. Tu's return for the Diamond Head Classic will further ease the situation; the players remaining suspended for that game comprise barely a quarter of Xavier's rebounding production. 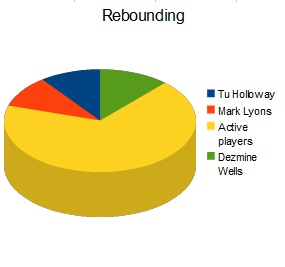 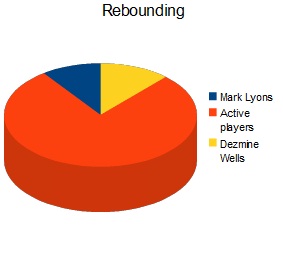 As you might suspect of a team whose starting back court and small forward are all missing a game, assists are going to be problem for Xavier, especially this Sunday. A full 60% of the Xavier's dimes this season are accounted for by players who are not going to be donning gym shoes against Oral Roberts. Tu Holloway's return in Hawai'i will exacerbate the issue in an extremely meaningful way; with him back in the fold, only 25% of Xavier's assists are unaccounted for. 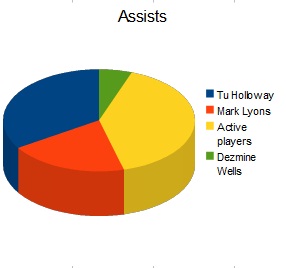 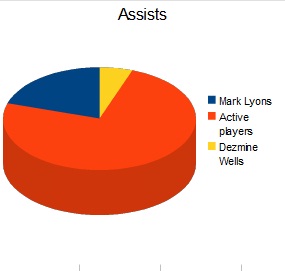 There you have it, visual people. Obviously, there's little to nothing good about having three of your starters out for any amount of time. Also obviously, getting Tu back after just one game is a huge lift to Xavier. If they can fight their way through the ORU game and knock off Long Beach State with a below-strength back court, the Muskies should be able to fight it out until Dezmine Wells' return for the Gonzaga game.