What happened: Xavier 76 - Cincinnati 53
Few things warm the cockles of Xavier fans' hearts more than a solid victory over UC in the Crosstown Shootout. Today, then, was a red-letter day for Muskie fans as X ran away from the Bearcats to secure a relatively routine victory. The Muskies actually trailed 23-22 with five minutes when an Andre Walker steal led to a Tu Holloway three ball. Xavier went on a 12-0 run from that point forward and the Bearcats never brought it back within shouting distance from that point forward. 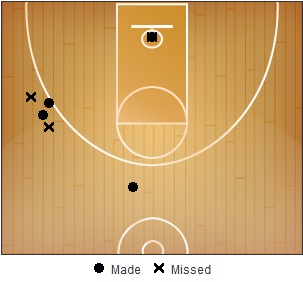 Cheek was the catalyst for the first half, dropping 14 points before the break. Lyons' final line was 19/1/4 on 6-11/3-5/4-4 shooting and 3 turnovers. He also picked up a block. He had trouble staying on the court for much of the second half due to foul trouble, but he was ultimately the first shot of the one-two punch that Xavier's back court packs. You can see from his shot chart over there on the right that all of his business inside the arc was conducted at the rim. Cincinnati didn't have anyone who could force Cheek to pull up, and his three-point prowess was enough to open up his lanes to the rim today.

Big Kenny showed up in a big way on the inside, posting 13/13/1 and only two turnovers. He also had four blocks; his second highest tally on the year to his six-block performance against IPFW. His shooting line of 6-12/0-0/1-2 speaks to the physicality of the game; despite spending most of his time giving and receiving punishment on the block, he only got to the line for one two-shot opportunity. Frease grabbed three offensive boards, including one for an impressive stick back on a fast break on which Cheek missed a layup. He was also part of forcing Yancy Gates to take 15 shots to get his 18 points. In a game in which Xavier fans were looking for Frease to step up, he did just that. 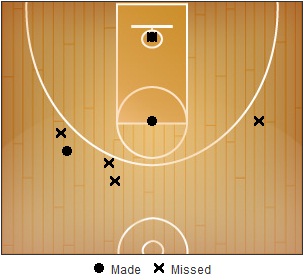 As per his pattern, Tu Holloway took his time warming to the game. One of ESPN's favorite things to do is show Holloway's numbers at the half compared to his season averages and then have the announcers talk about how he's not producing in the first half. Time and again, Holloway does what he did in this game; after having five points on 1-3/1-3/2-2 shooting, he ended the game with 17/2/6 on 5-10/1-5/6-6 shooting, picking up a steal and two turnovers on the way. His shot chart is there to the left; like Cheek, he was able to get all the way to the rim to finish. With both lead guards having their way with Cincinnati's defense, Xavier's offense was able to spread the floor, make the extra pass, and ultimately eviscerate UC for 29-56/5-14/13-18 shooting.

Dezmine Wells was a hurricane today, posting 14/6/0 on 7-10/0-0/0-1 shooting. He only had one turnover and, like Mark Lyons, had trouble with fouls in the second half. Almost as importantly, he was a large portion of Xavier's blanket coverage on Sean Kilpatrick. Kilpatrick - who notoriously stated that Tu Holloway wouldn't start for Cinci - put up 11/1/1 on 3-12/1-8/4-6 shooting. It's hard to believe that X could have done much better a job on UC's top offensive players, and Dez was a huge part of that. He is going to be an amazing ballplayer in the very near future.

I don't usually talk about anything not readily evident in the box score in this feature, but I think I'd be remiss not to mention the fight at the end of the game today. As the Crosstown Shootout usually is, this game was chippy and ill-tempered throughout. At the end of the game, Tu and Cinci guard Ge'lawn Guyn were exchanging words when Guyn brought his hand to Tu's face. It's not clear on the tape if he actually hit Holloway, but Dez Wells thought it was enough of a threat to respond. He sent Guyn skittering to the UC bench with a shove, and a fracas broke loose afterward. During the fight, Yancy Gates sucker punched Kenny Frease while Kenny was engaged with another Bearcat, and Cheikh Mbodj tried to stomp the Xavier big man while he was on the ground. It remains to be seen what the repercussions of this will be in terms of suspensions, but it was not a good way to end the game.

Odds and ends:
-Xavier put together a 13-18 performance from the line. X might finally be pulling out of the early-season funk from the stripe.

-Andre Walker put up 2/9/4 on 1-2/0-0/0-0 shooting. Walker's four offensive boards, two steals, and a block were the performance of a consummate glue guy, which is what the Muskie faithful have come to expect from him.

-Brad Redford missed all three of his attempts from deep today but made up for it with his first collegiate performance involving multiple two-point baskets as he shot 2-5/0-0/0-0.

-Xavier's 16 assists to Cincinnati's 8 tell the story of the offensive ends of the floor for both teams. X was able to move the ball and balance the floor while UC often stagnated in the half-court.

-Jeff Robinson got his first trip to the line all season today. I'm not sure what that says about him, but it's probably not good.

Dad's take:
(My dad is an old-school basketball guy and a die-hard X fan, and he and I text throughout the games from time to time. His opinions can be both insightful and entertaining, especially pulled from their context. Below is a sampling of his offerings tonight.)
-"12 minutes in and it's official; Wells is a beast."
-"Red was solid and I do not know why they play Robinson."
-"Gates already has ten!"
-"Tu for three!"
-"Lyons from deep. He talks a lot."
-"14 already [for Lyons]. Jenny gets blocked and makes 1 of 2, sad."
-"Nice hands Cheek. Red was all alone!"
-"Lyons is eating them up. Why is Lyons yapping at their bench?"
-"Wells is unreal."
-"Tu just left that dude!"
-"Kenny with the follow!! What a player!"
-"They busted Wells' lip. Typical Bearcats, I've seen much worse."
-"Lyons gives a nasty three facial!"
-"Kenny owns Gates!"
-"Martin for 3! Up 18."
-"Red to the hole! All-American!!"
-"Wells is scary good. Walker looking good handling the ball."
-"These refs watching the same game? Grabbing the shirt is the only way they can stop Wells."
-"Kenny from the baseline! Feed the wolf!!"
-[As the fight broke out] "What in the world?"
-"You see that guy go after Red?"
-"Nancy Gates, what a sissy!! Wells put the beat down on that kid. Lyons as peace maker?"
-"Gates should be suspended. Kenny wore it and exalted at half court."
-"Sad way to end the game."

As always, come back tomorrow for Brad's full recap. Xavier has more than a week off before their next game, but we'll have plenty of content up during that interval, including a look at how Big Kenny impacts the game in ways that don't show up in his stat line. Check back often.