There was some hue and cry raised after the Georgia game when Xavier let down significantly once the game was in hand. While Coach Mack no doubt wants to see the Muskies bury games after being ahead 36, the fact is that the game was over long before the second string started getting sloppy. Below is the win probability chart from that game, courtesy of kenpom.com. You can see that Xavier had it in the bag basically from the offing, and it was done and dusted with ten minutes left. 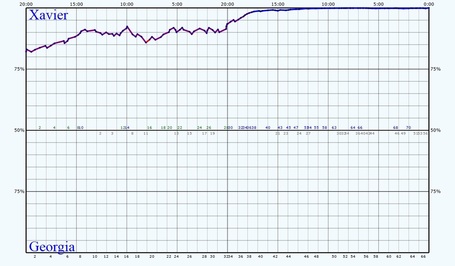 That's just background information for what happened Monday night. When Vandy - as the home team - was up ten with fifteen minutes to play, they were in a place where similarly positioned teams win 85% of the time. In less than five minutes, Xavier had swung the game to a place where they now had a better than 50/50 shot at winning it. The game went back and forth a few more times as Vandy held a narrow lead and home court advantage. 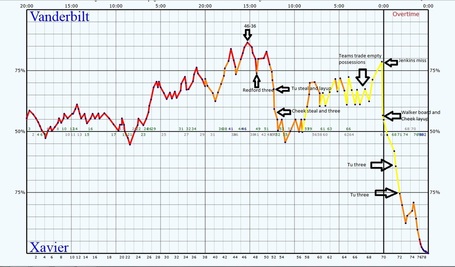 You can see on the chart - if you have good eyes - where I've marked key passages in the game. Redford's three was Xavier's first bolt of life. Five points off of two steals and baskets by Xavier's guards got X back into the game. Vandy's war of attrition about kept Xavier from knotting it up. Interestingly, securing the defensive rebounding after Jenkins' miss was - when combined with Cheek's subsequent finish - the biggest play of the game. Even Vandy's miss at the end of regulation left them slight favorites to take home the W in OT.

Of course, Tu took over in the extra period, salting things away with a pair of huge three balls. The rest of the game consisted of executing from the free throw line, which was no mean feat for Xavier. Despite being thoroughly outplayed in the first 25 minutes and finding themselves behind the statistical eight ball, Xavier has the combination of talent and guts to find their way out of a situation in which the had only a 15% chance of winning. This team has a real shot at being something special this year.