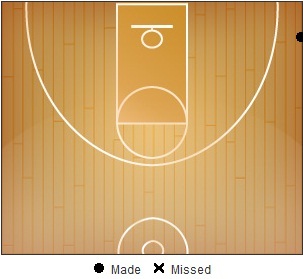 That was an incredible spectacle and certainly entertaining, but don't mistake it for a well-played basketball game. Despite the way they played for stretches of the game tonight, Xavier managed to win this game with two runs. The first one began with X down 46-36 with 14:41 to play. Tu made a couple of free throws, and then Brad Redford knocked down the biggest shot of the game to that point with a corner three that he barely touched. That shot chart to the left doesn't lie; Redford's heels would have been out of bounds if he put them down. Xavier's energy picked up after that; by the time the run was over, the Muskies had gone 19-7 over the course of four minutes to take a 55-53 lead. Write-ups won't mention Redford's shot except in passing, but Xavier's guards started to find a little more room to work in the paint after he knocked that one down. Of further note was Mark Lyons hassling the Comodores into a back court turnover and then, with no other Xavier players in the picture, knocking down a three from the left wing to bring the score at the time to 51-50 Vandy. John Wooden may have advised pulling that one out and setting the offense, but the King of Upstate doesn't take the idea that he has limitations very seriously.

The second run by ever increasing defensive intensity by the Muskies. Trailing 66-62 with three and a half minutes remaining in regulation, X cranked up the heat and held the Commodores to 0-3 shooting with 2 turnovers the rest of the way. That was just enough to overcome some questionable decisions on the other and allow Cheek to send it into OT with a twirling lay-in with 6.5 seconds left. Xavier picked up where they left off at the beginning of the overtime period and ended up wrapping the final nine minutes of the game on a 20-4 run. That kind of defense covers a multitude of ills for a team.

In his return to Vanderbilt, it was hard to know what to expect out of Andre Walker. He was as assertive on the offensive end as Xavier fans have seen him, putting up 11 shot attempts. While he only made 3 of them, he made up for it by setting the tone on the glass with 14 boards, including 4 on the offensive end. He also picked up an assist and only turned the ball over once while showing up wherever hustle plays were needed. The graduate student has quickly ingratiated himself to Xavier fans, and he will continue to do so with more performances like this one.

A lot of the focus of the post-game breakdowns will go to Mark Lyons and Tu Holloway and their combined 43 points. While their output and swagger can't be questioned, their combined 13-38 from the floor wasn't great. Both guards were having trouble against the size of Vanderbilt, and their 5-12 from deep and 12-13 from the line attests to the fact that it wasn't just a bad shooting night. Too many early drives ended with forced mid-range jumpers, but both players ended up making the adjustments that allowed Xavier to win the game. Their combined 4 assists and 7 steals with only 2 turnovers also didn't hurt.

Xavier's effort on the glass was nothing short of amazing all night. The Muskies won on the boards to the tune of 48-30 and pulled down 20 offensive boards to Vanderbilt's 8. With Big Kenny in trouble with the zebras all night (and it's hard to say what the were watching; the last time he checked out, Kenny had a black eye and two cuts on his arms), Travis Taylor, Andre Walker, and Dez Wells combined for 21 rebounds. While Vandy had a better shooting night, extra possessions on the boards helped make the difference for Xavier.

Odds and ends:
-Xavier was 20-27 from the line tonight. Not to pick on the guy, but Kenny's 0-4 was really the only bad performance from the line on the team.

-Five of Travis Taylor's seven boards came on the offensive end. He's starting to give a lot of same effort and intensity in the paint as Jamel McLean.

-Vanderbilt's 10 blocked shots are in large part due to Tu and Cheek's ability to get into the lane and unwillingness to admit defeat after being swatted before.

-As intimated in our preview, ball pressure was huge for X. They forced Vandy into 18 turnovers and really swung the momentum of the game with defense.

-Kenny Frease's stat line is going to make this game look very disappointing for him, but the amount of abuse that guy absorbed in the middle was borderline criminal.

-Xavier's perimeter pressure is good, but the efficiency with which Taylor and Goulbourne picked up their 36 and 12 for Vandy hints at some trouble defending the paint.

Dad's take:
(My dad is an old-school basketball guy and a die-hard X fan, and he and I text throughout the games from time to time. His opinions can be both insightful and entertaining, especially pulled from their context. Below is a sampling of his offerings tonight.)
-After Vandy's first bucket and free throw: "It's over."
-"Wells is a player."
-"Jenny stinks from the line."
-"Tu needs to start playing."
-"Wow! Getting left on the cuts."
-"What is with Tu and Lyons? Sit one of them. My man Kenny is playing!"
-After Kenny pursued Jeffery Taylor to the arc and forced a bad shot: "Kenny must have thought that guy had a sandwich!"
-"Need to get it to Wells."
-"They stink tonight."
-At the half: "Ugh. Could be a long night."
-After two more missed FT: "Just let us take the ball out."
-"Sad. Too small at guard to play with the big boys."
-"Red started the run! 1-1 with an assist! That's leadership; got them hustling."
-"Finally some hustle. These announcers must be Vandy grads."
-"Taylor has McLean-like range."
-"Plus 12 rebounding."
-"Tu is forcing. He and Cheek are 10-32."
-After Cheek's game-tying layup: "Stupid."
-"Defensive pressure is ratcheting up... finally."
-After Tu's back-to-back threes: "Unreal."
-"Great comeback; Red rallied the troops. I'm getting to old for this stuff."