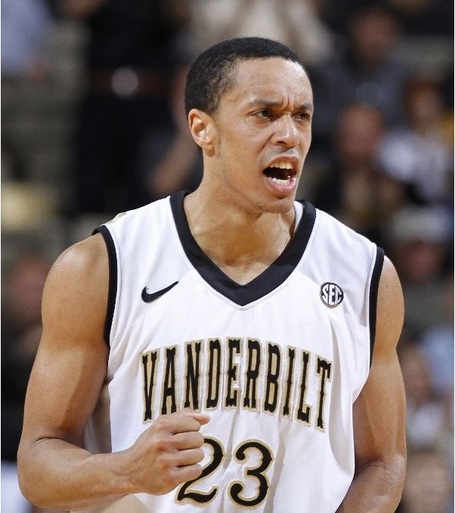 The Georgia game was supposed to be Xavier's first test in their last home game before heading out on the road. Instead, it was a walkover victory that was not as close as the none-too-close score implied. So, carrying a 4-0 record, Xavier will saunter out of a four-game season opening set in Cintas not quite as battle-tested as they otherwise might have been.

Vandy is yet to find its stride as a team this season; an early upset loss to Cleveland State at home and a two-point victory over Oregon State on a neutral court illustrate the hiccups this talented team has had. Part of the problem is no doubt the absence of big man Festus Ezeli, an NBA-level talent whose season opening six-game suspension was quickly superseded by a knee injury that will keep him out until the turn of the year or so. Even without Ezeli inside, though, Vandy has enough talent to do significantly more than just scraping together wins over unranked opponents.

The red-letter man on any Vandy scouting report is going to be shooting guard John Jenkins. The 6'4" junior has a wealth of talent, most notably nearly-unlimited range on a deadly jumper. He's currently posting 20/3/1 on a shooting line of .459/.426/.684. He also gets a little over a steal per game, but he's mostly on the court because he gets buckets by the bushel. Stopping him has to be a high priority for the Muskies.

Leading the team in assists and second in scoring and rebounding right now is 6'7" forward Jeffrey Taylor. Cast as the second member of the 1-2 punch the Commodores were planning to use inside, he has done quite well for himself in Ezeli's absence. His 15/6.5/2 line is augmented by almost two steals per game, and he's shooting .479/.235/.563 on the season. He knocked down 39 of 113 threes (.345) last season, so he is capable of making plays from deep. Keeping him off the offensive glass - where he's getting 3 per game - will be a more pressing concern for X.

Brad Tinsley is nominally the point guard for Vandy, but he's also a very efficient scorer. His A:TO last year was 2.5, but it's barely over 1 this season. The 12 points on .543/.381/.813 shooting that the senior is putting up goes a long way towards making up for his lost distribution. I'd suspect he'll change roles again once Ezeli is full strength, but that won't be the case today against Xavier. He averaged 11 points on 8 shots per game as a freshman; it's not like he's not capable of putting up points.

The team leader in rebounds is Lance Goulbourne, who is getting 9.5 and 7.8 on .538/.250/.640 shooting. The 6'8" senior was a similar monster on the glass last year and has generally improved over his career at Vandy. Steve Tchiengang gets 6.4 boards per game and, at 6'9", 240, is the Commodore whose breadth may make him most equipped to handle Big Kenny Frease on the post.

As a team, the 'Dores are excellent on both offense and defense, ranking 17th in offensive efficiency and 74th in defensive. Most of their offense is thanks to being 50th in EFG% and rebounding 35.3% of their misses. The defense is poor in terms of EFG%, but they control the glass well. Teams are shooting 53% from inside the arc against Vandy, a mark that puts VU's defense 288th in the nation in that category. They've been helped out by some free throw luck; opponents are shooting 61.8% from the line.

That's what Ken Pomeroy has to say about the game. Obviously, a four-point spread isn't huge, but Pomeroy only gives Xavier a 38% chance of coming away with a win. The numbers' predictive value needs to be taken with a grain of salt this early in the season, but this is the first one that Xavier hasn't been predicted to come out on top of. It doesn't take Andy Katz to see that this road game is going to be the Muskies' first real test of the season.

Three questions:
-Who guards John Jenkins? Last time X faced a similarly built scorer was IPFW's Frank Gaines. He isn't the kind of shooter Jenkins is, but he too is the focal point of his team's offense and has a few inches on Cheek and Tu. Mark took on the, ahem, lions' share of the burden against Gaines, but Dez Wells and even former Vanderbilt Commodore Andre Walker also took a turn on him. It will be interesting to see who Coach Mack deploys on Jenkins.

-Does size matter? Juvenile humor aside, Xavier has big men galore and an edge in the size department with Ezeli glued to the trainer's table. Taylor, Goulbourne, and Tchiengang are no slouches inside, though, they bring Vandy within a hair of equaling the Muskies' size. If Frease, Taylor, and Walker and going to be able to make a mark on games against high-level interior players, this would be the time to show it.

-What is Xavier's pace? X has had success forcing the pace on teams that are trying to slow them down, but the opposite may be in play during tonight's game. While Xavier plays an almost national average pace, Vandy prefers to get up and down the court a little bit more. If things start to get out of hand and Vanderbilt's student section is rocking the gym, can X play effectively while slowing things down?

Three keys:
-Don't let up. Xavier took its foot off the gas against Georgia once the game looked like it was in hand. Admittedly, it was, but a similar slip against a team as talented as Vanderbilt can be the difference between a marquee win and a loss that will gall fans into March. If Xavier is lucky enough to get a lead against Vanderbilt, the best thing the Muskies can do is to continue moving forward.

-Pressure the ball. Cleveland State managed to beat Vandy by putting consistent pressure on the ball and harrying the Commodores into bad passes and silly turnovers. Xavier's defense puts a premium on defending the lane first and keeping everyone inside the arc, but it might behoove the Muskies to extend the defense from time to time to check Jenkins and pressure the perimeter. Vandy is one of the worst teams in the country at avoiding steals; the more pressure Xavier puts on them, the more mistake they'll make.

Bottom line: This is a great chance for Xavier to beat a team that's as far down as it figures to be all season. When Ezeli gets back and the team begins to flow, the Commodores' RPI et cetera will continue to rise. If Xavier beats them tonight, that win will continue to look better and better as the season wears on. If not, I suspect this one will leave a bitter taste in Xavier's mouth for a while.

Find more coverage on the game from a different perspective at Anchor Of Gold.